Hello,
i’d like to know your opinions about a building i am drawing.
it is a try on a kind of palladian/neo classic building like. 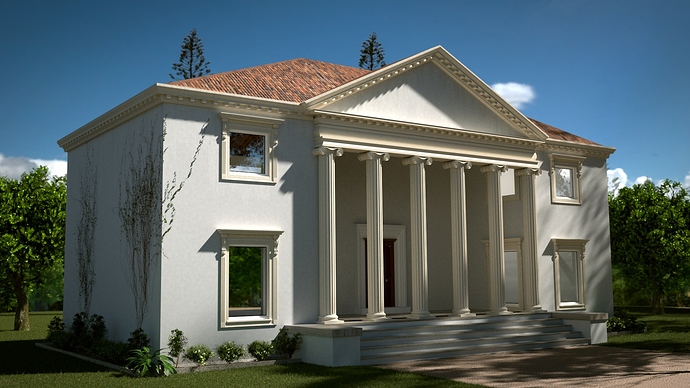 in your opinon, how can i improve it? how to make it more “alive”?
it is not an historical/old building, but a brand new construction, so i have limited the signs of time passing on the structure.
any critique is appeciated.
Regono (Ryan Maggs) October 2, 2015, 1:00pm #2

It looks really nice. The flatness of the scene is kind of throwing me off in the background. Maybe make some hills? I believe you could get a better camera angle for a shot. Maybe something with some foreground elements.

IMHO you could use CrazyBump for your roof texture and add a normal map to it for some more volume, walls are too ftal too (but I dunno if it’s a feature of neoclassical architecture).
To make it more alive - add some things that people living in this house will use, maybe a lawnmower or a bag with golf clubs.
Also look for actual photos of this kind of houses to see what are you missing.

These windows are weirdly placed. I think, they shouldn’t be there. And I don’t think it is a brand new house. It took a while to ivy to grow so high, but I have no idea how fast ivy grows.

but I have no idea how fast ivy grows.

At my summer house similar plants did grew about 3 meters tall during summer, if conditions would allow I’d bet they would have covered whole house in about a year.

main problem is the house doesn’t have depth,it looks one room deep.it is better if you collect some reference images of such houses and model it.maybe you can show more of surrounding areas,also better camera angle.you can add a feeling of depth by using foreground elements-longer walkway,tree branches framing etc.

@RedSchuhart, you probably are right, have to model the background a little less plain in order to make it interesting, let’s hope my hardware can held the increasing amount of particles needed for grass on hills.
The lawnmowner idea is very good, i couldn’t figure out what to put in front , excluded cars (no road) and people(it will result in more work than the house itself). on the other hand you made me think that lowering the camera might give a much more impressive look, and need far less particles for the grass.

@RedSchuhart actually there are both normal and displacements on walls, but really light and with really tiny scale and no, it is not a neo palladian feauture :-P, maybe it’s an italian one, we are traditionally quite good plaster performer(yesterday was looking at a picture of a new house and thought how awful was that rendering, i thought “they didn’t applied even a material on the walls”, came out it was an actual photo, lol). but probably sometimes less realistic might look more realistic, i’ll try increasing the textures scale, and the weight thank you very much.

@lasseJV yeah the upper window might not be there. and the lower door might have been a little closer to the other wall either. i’ll fix those. i was in a desperate try to avoid lateral windows (this should be the north face, est/west windows just loose heat in wintertime and make the house a hell during summertime).

@theoldghost it is actually just one big room large on the central part. it is intended as inspired by an existing 1554 villa, just made it little smaller, same volume proportions but where there had been only one floor in the front part (with 8meters ceilings, just imagine heating something like that) and instead i made two of them. the perimetral dimensions are about 10mt x 18 mt, so an area of 180 square mt for the ground floor and an upper floor of about 100 quare mt. as the central part should be all open with big staircase. the original house is that one: 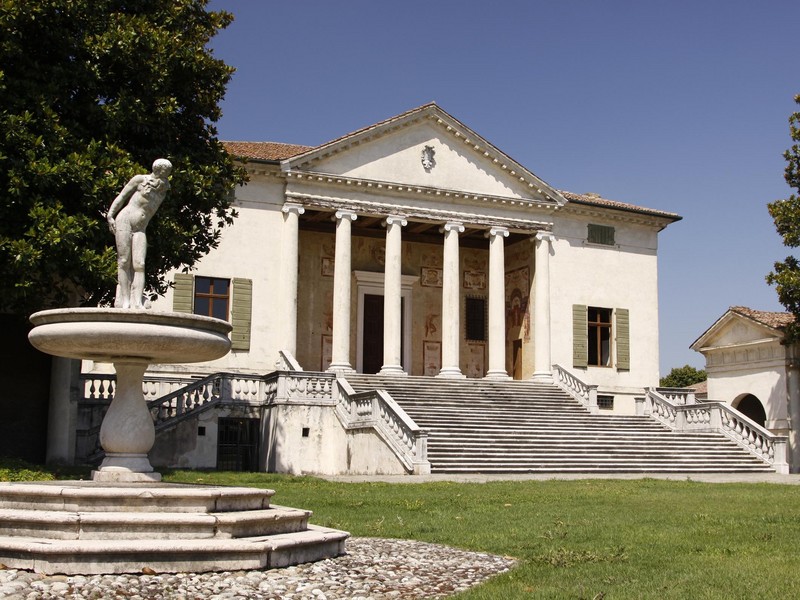 it has a much bigger basement witch i didn’t need and about 1.5 the frontal real dimensions, the real one is much more deeper, (quite a quare in the top view) witch i would avoid both because nowadays nobody need those dimensions, and because of sun irradiation, the one you see should be the northern face, the southern one should have big big windows.

Thanks to all of you for your kind critiques, as soon as i can i’ll fix those things.

changed the texture scale and increased the weight of both the texture and the dirt on the walls thanks to the suggestion of
@RedSchuhart , can’t decide if it is sufficent or should be advisable to add more.
also taken away the upper central windows ad moved the downer one. next move i’ll try something on the camera position and around composition.
tried apply heavy bump map on the roof, a horrible result, i’ll try make one manually drawing some gradients.

Simply comparing the reference to your image I can find a few things that hopefully will make a good difference.

The edges: The corners of the house are extremely sharp compared to the reference, consider a small bevel to soften them a bit.
The grass: the grass is perfectly flat, there are no undulations in the ground whatsoever, they dont need to be dramatic but if you’re going for realism its all about the small variations.
The roof: the tiles seem particularly flat. consider a hair system or an array system to create actual tile models for the roof. It will add a lot. A displacement texture could do just as well too.

It looks really good as a starting point, its not far from being spectacular!

@nearleyg you are surely wright about those corners, thinking about it looks that are capable of cutting off your hand if you touch them. i have just augmented the grass plane displacement, probably i need more subsurf on it in order to achieve satifying results.
The last shot has also had a roof height map quite heavy, but it still looks so fake, tried the displacement with a texture designed on purpose and looked all messed up, probably it was a subsurf problem too. is it possible to put all the tile in an ordinate way with a particle system? really? WOW, want to try that, might i ask you if you know where i can find a good tutorial about that? thank you in advance.

thanks for the tip on grass colour variation, i’ll try to figure out how to achieve it.

in the meantime, a quick frontal shot: 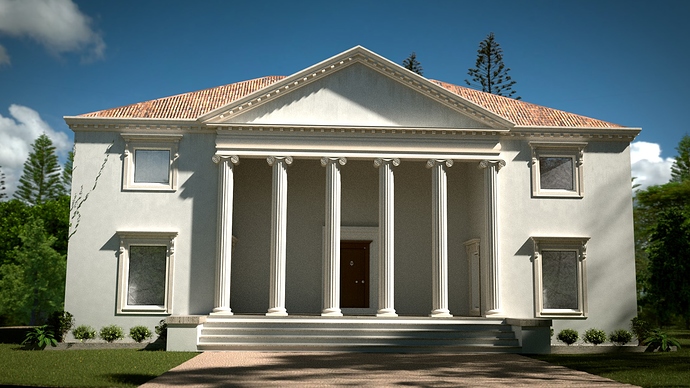 it is a really a quick shot, had no time to position the camera properly and the house is actually floating a bit, just to give the idea.

Wow @nearleyg thank you very much for the particle sistem hint, i was getting mad with arrays or displacements, this way’s better, and also quicker.

ok, this is the entire roof. 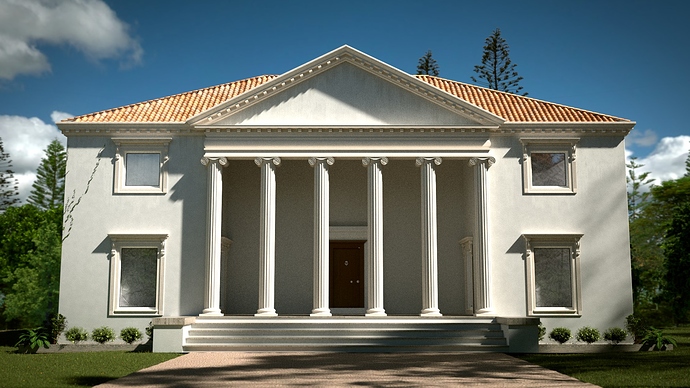 Having actually lot of trouble in mirroring it as the damn mirror modifier seems not to apply to particles,
had done the wright lateral roof, but cant get rid of the left lateral one

Wow, what a great improvement. Glad I could help with the roof. Its really starting to come together.

If mirroring with a particle system is an issue, once you’re happy with the roof that the particle system has created you can make the particles “real” by applying the modifier and then (after joining them together) you can use modifiers as you would on “real” objects. I’d be careful if your tile objects are too heavy as it might slow down your scene in the viewport (2.76 is much better so its less of an issue, but still…) so make sure it’s saved before you try ;).

The windows look a bit like mirrors at the moment for a front on shot. Are they using the cycles glass shader? Because its a bit tricky to get shadows right with. The cheat way is to control the mix of a glass and transparency shader using the “light path - shadow input”. This may well not be the problem but something looks a touch off.

An ambient occlusion pass might be nice to add a small amount of dirt underneath the window frames but be careful with this as it might be too dramatic on your roof since its now actual geometry.

Great progress dude, keep it up its looking fantastic.

sorry for the delay, few time past two weeks;
meh, the windows are temporary, the glass is ok, adjusted the light paths, but as there is no walls on at the moment on the other side of the house i made a very fast and very bad kind of curtain,
At the present time i am re building the southern part of the house and making few changings on materials on the walls in order to make it more interesting, i’ll post them as soon.
I think i’ll do as you suggested for copying the tiles, but i have to wait to have shaped the other part of the house.
For your Ambient occlusion suggestion i’ll make it a try, never used it for that purpose, but i’ll be glad to experiment!