This is the first release of Neon Ball! I made this game in ~ 3 days, and then spent a couple weeks procrastinating trying to make levels.
There are only 7 levels so far, so I may make some more at some point.

The Aim:
Drive your ball into the green light

Controls:
Arrow keys for movement and mouse to look around. Space to jump 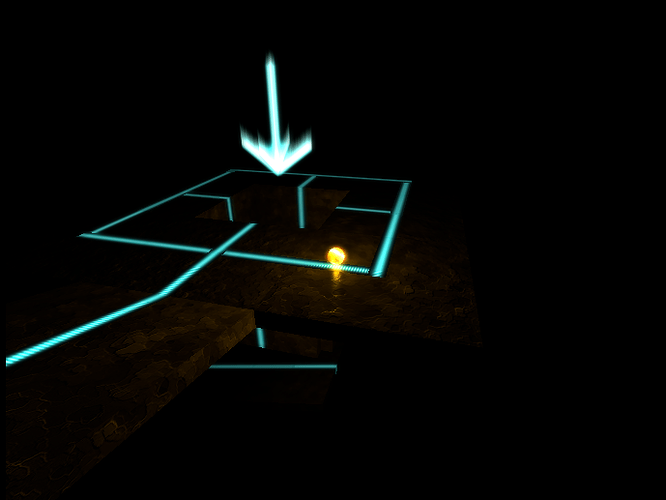 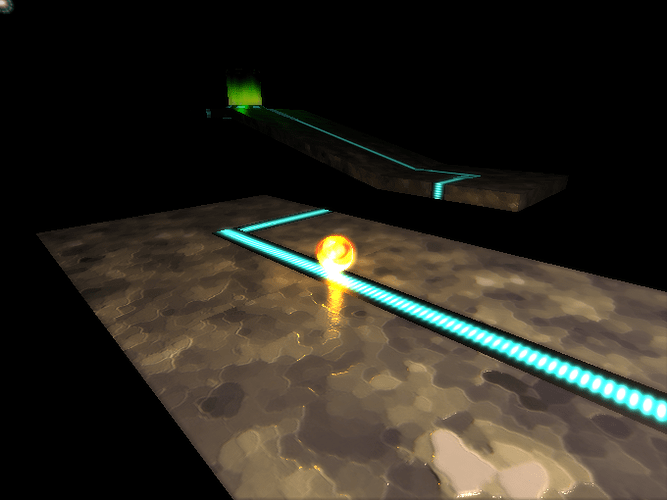 Licencing Information:
All textures, python scripts and models were made by me. Feel free to use these with the CC-by-sa licence.
The only thing I am not sure about the licencing of is the bloom shader script, which came from these forums.

PD: Good use of normals.

That’s pretty awesome. The camera got really cranky when I tried to “lookup” and it started to collide with the floor (on 2.66a) but other than that it is pretty, the music is good, and it is fun to play. You should flesh out the levels and at least put it up somewhere with a “donate” button.

@carlo697
Thanks! I’ve currently got a few more levels in the build-stage, so I’ll release a new version when they’re done.

@kastoria
Yeah, the camera has a couple issues.I think I’ll impose some more constraints on it. (It also does weird stuff when you try and look down from the top.

The long term plan with this game is as follows:

How do you start the game?
How to play? (I have never played a blender game before…)

@augustin valjean
Open the blend, and press ‘P’ on the keyboard.

Nice! Reminds me a lot of an Xbox game that had a lot of similar mechanics. But it’s cool.

@augustin valjean
Open the blend, and press ‘P’ on the keyboard.

Thanks a lot.
Nice game.

Cool game, the graphics are nice (the reflection of the ball on the floor secular is very cool).

The jumping seems to be delayed (by about .2 of a second) but it is very annoying (or at least it was for me). And the camera-floor bug happened to me too, but the game looks promising. Also the lines in the center of the track, where they intersect, look wrong (imo), maybe they could turn instead of over-lapping? Maybe making it more puzzle-focused could be cool too (there are already elements you can use from the game - eg the levitator thing). Good luck!

How are you planning on selling it, by the way? Selling in an android store could be an idea?

Feel free to add this in?

as a puzzle / level tool?

throw the ball into the hoop etc?

Had some fun making my own level, which includes a huge (could be more huge) drop at the end.

uoooow =D. This is very nice !
The normals map and te controller of ball is lol =D

it does not seem to work in fullscreen mode…

I just played through it, and I honestly have to say that this is a very well polished game (as short as it is).

The only crit. though, I can tell that you probably use a ray to ensure that the camera is never between a wall and the ball. However, you do not have a secondary mechanism that then disables camera movement in various directions until the distance between the camera and the ball climb back to a certain spot (ie. without it, the camera keeps trying to move back, but doing that triggers the ray again and gives it a back and forth jerk motion). With the secondary mechanism in place, the camera would not be allowed to move anymore until the mouse movement takes the camera away from the surface or the ball moves forward a bit. (you might need to first learn how to detect the mouse movement direction though).

The other thing I’ve thought of is that it needs those extra pieces to make it more like a ‘game’ (things like scoring which might be based on time and how many items get collected).

Very cool, sdf. The neon effect is great, thanks for sharing this.

could be improved a bit, but it’s a nice game.

Wonderful game, my only complaints would be that on most of he levels the camera started out under the ball for me, the textures on one of the levels went really funky and started flashing between blurry and detailed, and I cant rotate the camera when I am moving the ball. It is possible that these issues are only happening with me, but they brought down the fun factor in an otherwise excellent game.

This doesn’t work for me

I pass the first level and I get the “you can’t fly…” message,but nothing happens when I wait. The first time this happened, I get a ball and the camera goes in/out of the ball. Then the next time I restart the blend file, nothing happens

Fixed the issue with it running too fast on some computers! Download it again from the first post.