I was hoping someone could point out what I’m doing wrong here. I’m trying out the Network Render using this tutorial 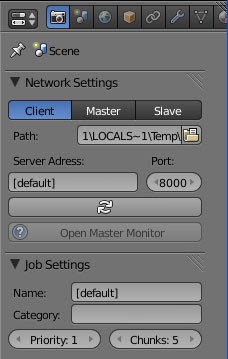 although I’ve followed it exactly (at least I think so) I’m only getting black frames rendered, but when I render as usual using BI render it’s fine.

anyone have any ideas?

I have the same problem too…

I dont have any programs association’s with .exr (which is what the slave renders the files out to), do you think that could be a problem?

I had no idea that it used .exr as the output format. I assumed it would be using what you’ve selected in the render panel of the Master.

If you come across any solutions I’d appreciate if you pass it on, I’ll do the same.

good luck to the both of us I guess?!

Hokay, I think I may have found the problem

Set up a network render with the master and slave. Then on the client, get the master IP. Then try to get the slave status. Do you get a syntax error in the console (on the client)?

I am running into this issue as well, There are a bunch of camera errors that appear once a slave node starts to proccess the blend file. The slave’s render takes no time at all, when it should take about 6 minutes per frame based on my system and scene. The image editor also shows black on the slave.

Ideas anyone? Or is there another app I can use? Does farmerjoe work on 2.54? I’m kinda in the middle of a project right now and the deadline is fast approaching.

can this be attributed to a bad path of some kind? Remember that blender is already running the slave before any of this comes up.

I was able to fix the above issue by reinstalling 2.54 to the same directory as the install, (second option in installer) so it is no longer forced to look at the Application Data directory.
Seems to be working as it should, but I still get blank frames. The slave takes 4 seconds to proccess each frame, and seems to do it fine, the exr is almost 3 megs, but I cant see anything in any of my apps that can open .exr. Could there be an error in the .exr exporter? Is there a way to get around using exr? I’m going to try running it through a composite next, maybe with an save node too…

I ran into the same problem.

The slaves rendered the frames just fine, you could see them local and throuch the master monitor.
On fetching you get all black images back and I got some py error that it can´t access the source file.
Might be something with windows and the UAC. Also running in admin mode or using userspace directories doesn´t solve the issue.

Also funky, some of the slaves (all with the same slave file) rendered with indirect lighting on, some with it off -.-

Netrender needs a lot of work, but it´ll be an awesome feature once its completed

I believe I have found the work around, you will need to modify the slave.py in the scripts\io
etrender directory.

this command actually calls a new instance of blender and starts the render, you will notice the -F flag, which sets the output format. I changed it from “MULTILAYER” to “EXR”, saved it, restarted all my blender windows, and it ran great!

Be sure to press “Start the service”. This assumes you have started a master, a slave, and a client (that’s 3 things) and have connectivity.

If this thread is still open, here a solution I’ve found:

edit the following files using the text editor of your preference:

replace all occurencies of exr by jpg (or bmp).

save the files, reset the farm.

it worked for me. Now my farm renders in jpg and no black render result occurs.

If this thread is still open, here a solution I’ve found:

edit the following files using the text editor of your preference:

replace all occurencies of exr by jpg (or bmp).

save the files, reset the farm.

it worked for me. Now my farm renders in jpg and no black render result occurs.

I’ll have to give this a try. When I get a chance I’ll let you know if it worked for me as well.