This a really bad example. But it works really nicely! I’ll give you a quick overview.

You know how in super mario 64 there’s a stair case that goes on FOREVER, if you don’t have the right amount of stars. Well, Raidium looked at the actual game and all it did was get the camera and the player’s position and set it back a few steps.

So what I did is this:
I made a super simple stair case with a cube. When the cube hits another cube, it gets set back to a lower cube. Now if you make the starcase the right size, and you put the cubes in the middle, you’ll hardly notice the difference! Plus, if you game has animation, the user is distracked by the animation and doesn’t notice the position change. It’s to fast!

My example is crap, but when I get it implimented into my game, I’ll post it up here. It’ll be my character in one room with stairs, and the stairs will never end, hopefully this will give you the idea…

The .blend is in the attachments.

I quickly set up a logic-brick version. (Although I urge people to use python!)

Well I’m learning. I getting better with python, now I need to learn how to use it with blender.
Good example there. A little jumpy, but gets the point accross really well.

I didn’t realize you could do that with just logic bricks; I wouldn’t though. I love python too much. Yes do learn the GameLogic library, it makes the game engine that much more fun. Just hope they don’t change all of the functions to variables on you… Ugh… I’m still recovering from that.

Personally I wouldn’t set the position to another cube; I’d just add a certain negative amount to the Y and Z axes- that means the player can even jump and, as long as the offset is the correct amount, the transition will be 100% completely unnoticeable.

Also, I’d make the player be set much farther back, so you can have, say, a set of three or four different paintings that repeat along the walls, and when the player is moved they’ll not jump. With a jump in as short a distance as you have, you’d have to have the walls and stairs’ textures repeat exactly the same over that distance, and the textures would end up looking extremely boring.

I know what you want to do, I just wouldn’t know how.

Can you make an example .blend how you would do that? The part where you say:

I’d just add a certain negative amount to the Y and Z axes- that means the player can even jump and, as long as the offset is the correct amount, the transition will be 100% completely unnoticeable.

Here is a modified version of yours, I just subtracted 5 from the current position.

Thanks you mcguinnessdr! That’s a much better way! Is that what captain oblivion was talking about?

Anyways, I implimented the stair case with my character! It seems to work exactly like the mario 64 star case. But seems to work ok… Does anyone have any ideas on how to make it MORE seamless?

The .blend attachment is down until I figure the problem out! 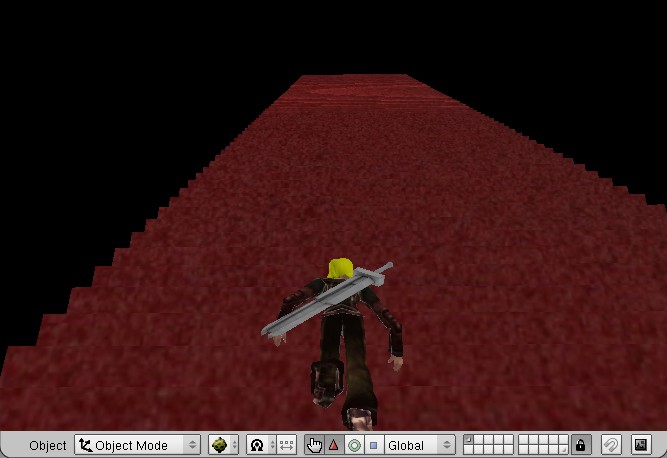 That is the way Cap’n oblivion was talking about. and I think you uploaded the wrong file, it doesn’t have your character or any controls.

agh, I’m sorry, I just noticed I was using a group from another file! I tried fixing it, but I can’t it doesn’t let me move append the character for anything!

You guys are going to have to use the crappy version until I figure this out.

don’t get me wrong, this is really good, but if you notice in super mario 64, the paintings on the walls keep moving while your “running in place”
with this method, if there were walls with detail on the side of the stairs then it would be obvious that your position is being reset…
good job on this though

yes, in mario, your position gets set back a certain position so the camera and mario line up with the paintings… At least that’s what I heard from raiderium!

But it seems to be correct so far!

Your method is basically what they do in mario, but as I said they set the character back much farther, so you pass a lengthy section of wall before it repeats.

You know how in super mario 64 there’s a stair case that goes on FOREVER, if you don’t have the right amount of stars.

I hate that stair case. so, much.

@Mentalturkey:
I nearly had a mental breakdown when I discovered how it worked.

So much anguish inflicted by such a simple operation…