quick reminder of our YouTube comment conversation…and as I mentioned and as we talked about a script to do the following would be awesome as an addition to your add-on.

First: Batch-Import all your frames with I2M (with numbered filenames so they can be sorted)
(note: This would ofc work with any objects with numbered names, no matter if you use I2M or not) 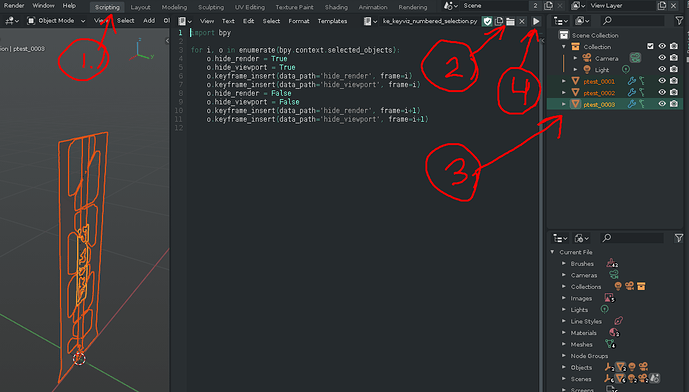 both render and viewport visibility should now be keyframed in order. and a “mesh video” (?) should be possible ;>

note: The actual number (time-stamp or whatever) in the names is not important. just as long as they are in order it does not matter what the range is or where they naming starts. Keyframes will always start on frame 1.

edit: updated script (you may need to scrub/play the time line for the view to update)
ke_keyviz_numbered_selection.py (488 Bytes)

This will save some time! I’ll give it a try. Thanks for the effort Kiellog

Ah ok, it was more of a reveal-roll-out there… I’ll update the post above with a fixed script.

Thank you for this awesome tool, it’s great for bringing handmade art into blender. (so it could be rigged like puppet warp).

One problem: In my use case there’s really no need for high resolution, I would rather have very crude geometry with transparent “overflow”. This is possible when setting the tolerance 1%, but there’s unwanted holes in the edge of the mesh regardless of smoothing setting. It would be great if the edge was always outside the opaque parts, so this would really be a one stop solution to making a mesh out of a png. Well that is an interesting approach ;> It is not as intended, but I can the see how that might be of some use. ( Though, it seems your internal res set to 32 in the example is probably too low, as it seems like it is clipping away details here & there.)
I dont know if I can help you though - I dont have an algorithm at the ready to solve for this unfortunately, and I fear it might get a little too advanced for me. But I’ll keep it in mind!

ed: You could probably try “mesh / cleanup / Fill Holes” post-I2M ? That would be my first “solution”

(meaning, if this does the job, I’ll just add a button in I2M that runs Fill Holes at the end ;> )

ed2: There are just too many variables at play, some manual tweaking will be required for this (hole-filling) to be a one click solution, even with Fill Holes. So, downgrading to “probably not”.

Are you Finnish Kjell?

Holes are not really a problem. I meant “holes” in the edge that carve into the opaque areas, as you can see in the leaves.

So if were to improve the algorithm, there’s two options imo:

I was testing low res, because I intend to add hundreds of vegetation in an animation.

Ideally I would pay for a tool that brings a whole psd file to blender and does this to all layers. Right now I use after effects for this, and it’s so easy to bring a psd with all the parts, and then just rig and puppet warp it. But I would prefer blender for everything otherwise.

Here’s the animation where the asset is from (made by me and my gf):

isäni on torniolaaksolainen, mutta emme puhuimme paljon suomea kotona…(minun suomi on huono;)
(better stick to english here anyways! I just went with ‘moi’ as I saw ‘kukka’ in the example

Hmm, ok. I think it might be better to approach this at the starting point, and perhaps adjusting the alpha (layering a blurred alpha and cranking it up with contrast would produce something close to what you want for the outline) This could be done during image creation (in photoshop or where ever the content is made) ideally. (and then using a different alpha later, the original…hmmm)
Maybe there is some utility for alpha manipulation in I2M, but I’d have to think about it (i’m not very good with (potentially) complex math/algos ;D )

Can you temporarily dilate the alpha using a temporary compositor action?
https://docs.blender.org/manual/en/latest/compositing/types/filter/dilate_erode.html

I dont know if I can ;>
However, there is some dilation code (numpy) found online I could probably implement. Maybe.
TBD.