Looks like we’ll have a pretty slick viewport to work in even if we don’t activate Eevee for full material previewing. I especially like the combo you get when combined with the 2.7x mesh color used when Cycles is the rendering engine

Now we just need the assurance that the viewport will be far faster then 2.7x in all cases (even in editmode).

Are you guys happy with the matcaps without label names?

I liked the way it was before, it was faster to see and read the names.

I don’t think we need names here. The preview tells you a lot more about how your model will look than any words you could put in a file name.

Nah man. The label names are super useful.
This might work for those with very few matcaps, but I (as a zbrush user also) got hundreds of matcaps, and some of them are groups of very similar matcaps and the only way to quickly pick the right one is by looking at their names. Waiting for the tooltip is not an option. It also kills the ability to sort them quickly, because you never know which is which.

I don’t know who had this poor idea, so yeah, it’s an insane regression to me.

Why on earth would I like to see a material without his name???

Right, but we have the ability to mix the matcaps with other effects here. This should hopefully remove the need to have a lot of matcaps that are just minor variations of the same material.

They plan on adding “instant tooltips” for labels later.

They were added as placeholder to show something until they lazy-load.
But since the load is fast and it’s hard to fit the text, and their name
is displayed already in the tooltip, we can do without for now.

In the future when we have insta-tooltips we should make them use this.

Unfortunately is not good enough.

@xrg Still will not be efficient enough as having them displayed all at once.

That’s what I don’t understand in the blender development, they always try to make the most weird and unusual things for no reason.

I think they did it because most of the text was getting cut off on the labels.

Still was an ingenuous move. Ofc there will always be cutt off on longer names and this is pretty common, and not an issue at all.

Now, removing the labels because of that is just unthinkingable.

If you have that many matcaps, it looks like scanning through the previews would take about as much time as looking for the right label.

Having the labels in the tooltips would save UI space and allow for the full name to be shown. Besides that, the matcaps will be adjustable using the material color option found in the material panels (so you could perhaps just have a white matcap instead of a bunch of identical ones in different colors).

Seriously, can’t you see how important the labels are? Then I don’t know what to say anymore.

And by the way, multiplying colors on top of the matcap is not the same as having variations of the same one.

The new set of matcaps is in the Blender now, well done to all the participants 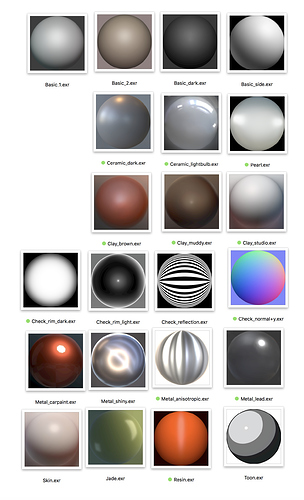 The new set of matcaps is in the Blender now, well done to all the participants

while not as precise as with NURBS the zebra matcap however will make organic sculpting for product and toy design a lot easier. heck all we need now is a surface continuity map

What is continuity map ? Never heard of that

Curvature map - I used the wrong term.
A curvature map shows how much and how a surface bends

That’s not possible with only a matcap, because of the way it works, a MatCap takes only the normal on that specific pixel in consideration and has no way to know what is surrounding it. It needs a(n additional) custom shader ,like an Ambient Occlusion with flipped normals. Something similar is already implemented in the workbench engine, but I don’t if it’s possible to customize it much (I’m using a fairly old version and it doesn’t work for me, but I have an intel HD and EEVEE shadows are broken, too). 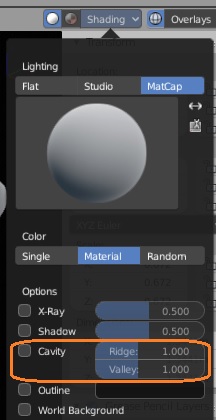 I prefer your original term - continuity map. Curvature “indication” (such as cavity) cannot be used to spot continuity issues. Zebra stripes help, but for organic sculpting for product design, ideally you want curvature combs. I have no idea how you would do it though.

Both are two different things:

Zebra shader is mainly used to look for surface distortions but primarily how surfaces flow into each other. a fluid zebra means perfect G2 alignment and kinds in the zebra along edges means not even G1 alignment.

surface continuity checks how one nurbs surface flows into the next surface when combs flow into each other but also shows how a surface bends or not.
The curvature combs can be used here to see if there is a break. in the comb where you have surface edges! This also applies to curves. 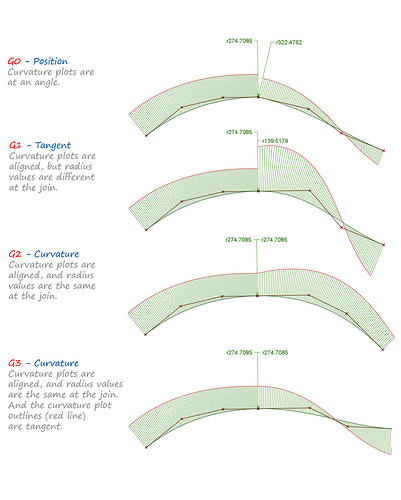 obviously curvature and continuity map can be mixed too