I have been watching Andrew Price tutorial Let It Snow I have downloaded it and unpacked
Have a new name
Using Blender 2.67 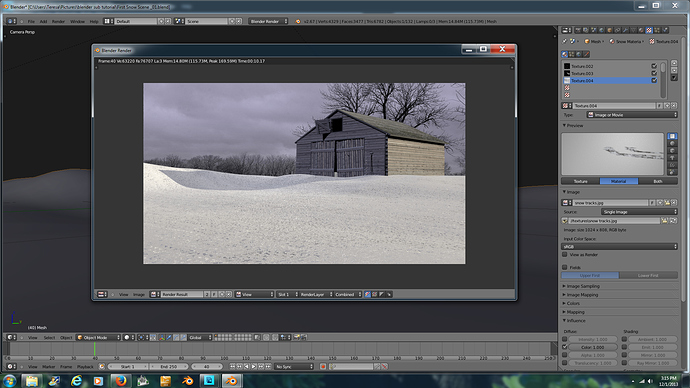 Is it using a displacement texture? Could it be that youdon’t have enough subdivision to allow displacement?

So sorry I should have mentioned this is a mask.

Craig I did a texture paint and made a mask for those tracks. It wasn’t a displacement. 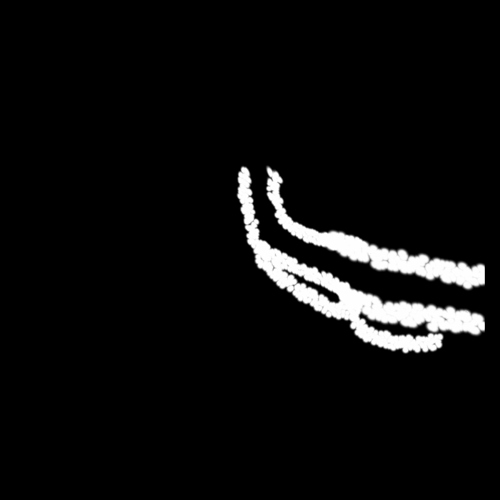 Here is an image of the mask in the preview window 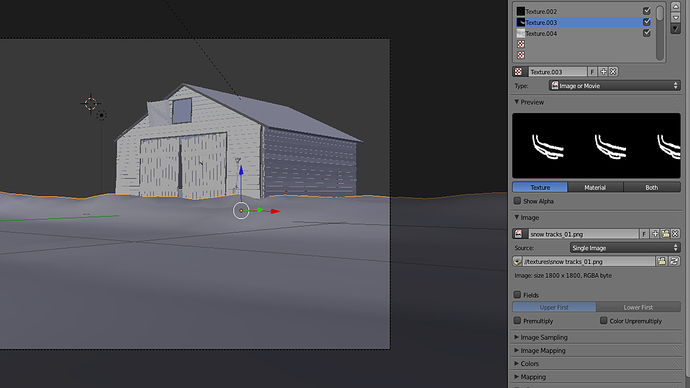 I have also been looking for tutorials on how to do masks and I found some but not with this particular problem.
If anyone knows of any tutorial on the net then please let me know.

what doe she do in the video tutorial, does he plug the mask into a bump node and feed it into the diffuse shader?

This tutorial was made for Blender Internal render. And Andrew Price was using the tire tracks as a texture for the displacement modifier. You can see this around 14:00 in the video. So, now that you have created the mask you are just one step away from the tracks 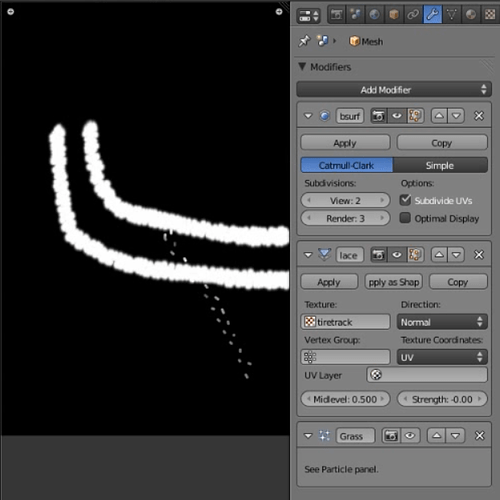 Good work on the modelling so far.

Craig you were correct it is a displacement. I should have gone further along in the tutorial.

minoribus thank you for your comment on the modeling. I did the displacement modifyer and put the strength down to -0.05 and set it to UV.

As you can see it is still not in the correct place. So now what? 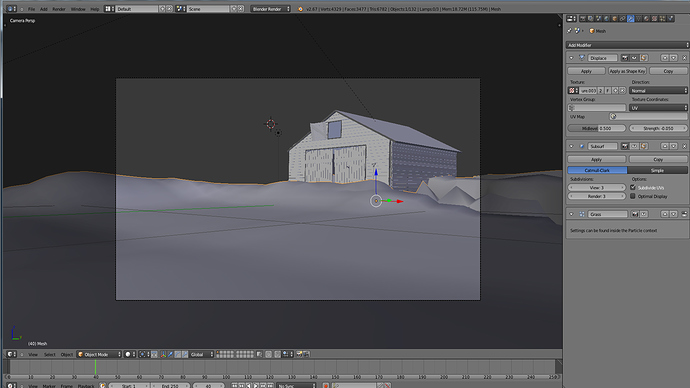 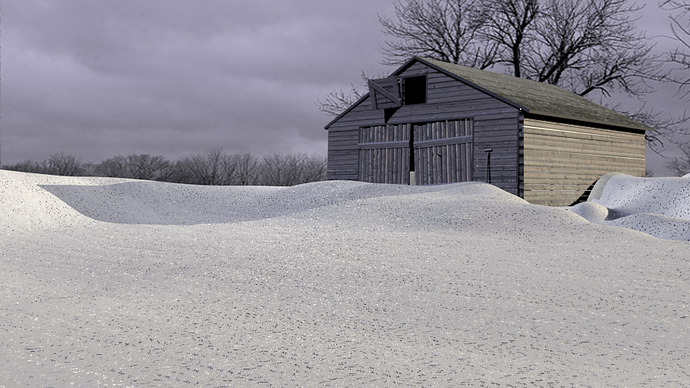 Have you aligned your UVs in the UV Image editor against the image?

Craig Have you aligned your UVs in the UV Image editor against the image?

I thought I had but I took a closer look and I found that It wasn’t lined up so I redid the tracks.
I realized how very important that is to do. appreciate it.

Great Idea to do that It made it looking at it so much easier. Thanks for the suggestion to do that. 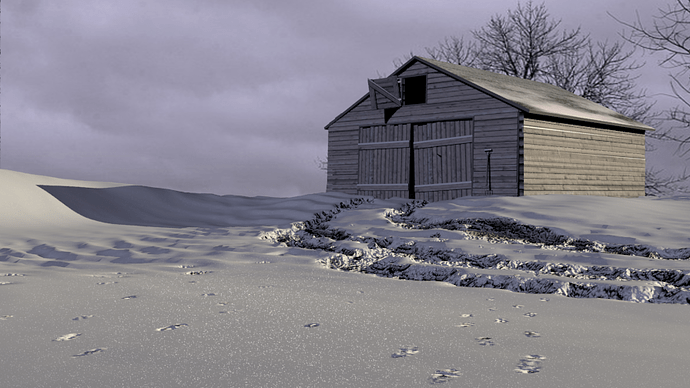 Yeah, there you got tracks.

The texture on the tracks is also nice. Very good progress.

Yeah, looking good now - I like your scene so far! Comparing before and after, it looks like you had set to UV but not properly unwrapped it, so your texture was affecting each face with the same pattern

Now you are good, all better!

Yeah, looking good now - I like your scene so far! Comparing before and after, it looks like you had set to UV but not properly unwrapped it, so your texture was affecting each face with the same pattern

Now you are good, all better!
Thanks Craig. I sure have learned a lot from doing this

Yeah, there you got tracks.

The texture on the tracks is also nice. Very good progress.

Great I appreciate it.

I am just about done with this. i have to fix that shadow and soften it more than I have. Will work on it tomorrow some more. 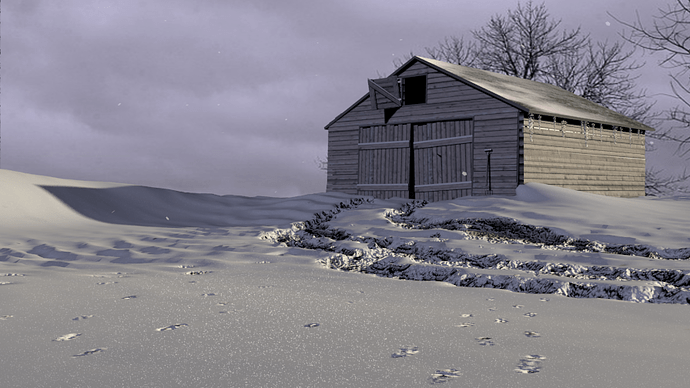 Looking much better. I suggest trying a bit of SSS on the snow, that might give it a much more natural feel. Also it’s a bit odd to have a super harsh shadow on a cloudy day.
Keep up the good work!

I suggest trying a bit of SSS on the snow,
Not sure what you mean by that. Please clarify.

I agree about that shadow and I wanted to change it so I used clicked no shadow with the spot light that I had
which is not what I am looking for so I will look at this once I get back from work. 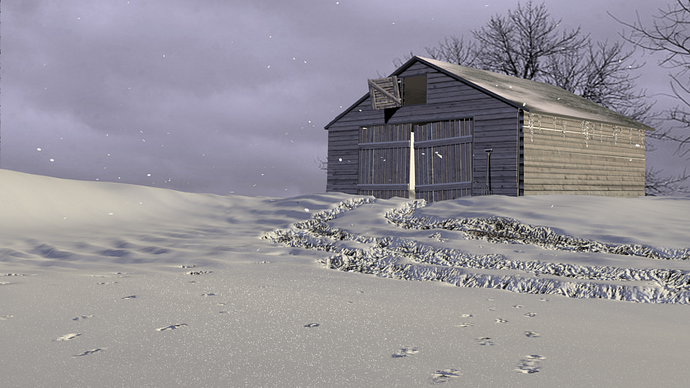 To get softer shadows with a spot lamp you can set it to ray shadow and increase the soft size. The smaller the size he sharper the shadows. You can also control the quality of the shadows by the number of samples you set in the spot’s properties. Be careful. More samples increase render times also in Blender Internal.

I am going to call this finished 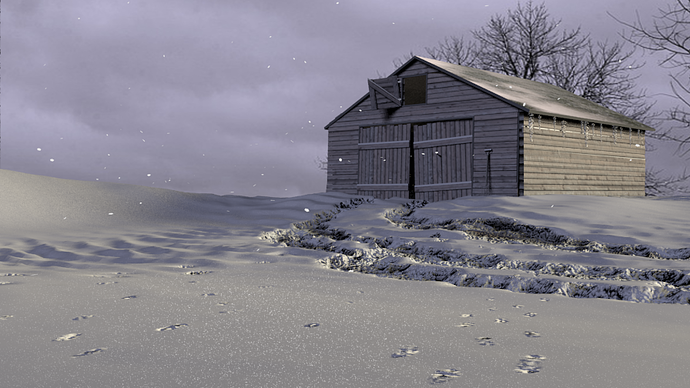 Looks beautiful, only thing I can say is to look at ways color correction or levels might give you alternatives to the render itself, but that is not mandatory. Your image is great, good work!

Yes, a beautiful image. Good job on this.

Since you’ve asked for it: My two cents are that with this big icicles I would expect more snow on the roof. Were else could all the water for the icicles come from. And the second point is that the window in the gable looks flat. Is there really a hole in the mesh?

Craig Thank you for your help in doing this. I did learn a lot. I will give the color variation a try and see what I can come up with my next render.

minoribus I appreciate your feedback and for all the help you gave to me. Actually it is a window that didn’t have glass in it.