I am not an active member here, but some of you might know me. I am not a coder, and I don’t want to get dirty with python just yet. But I have been fiddling with an idea for a while now, and I decided to sketch it out, so maybe someone might do a fancy addon out of it

The most annoying thing for me on the UI, is that basically, when I use a special floating menu (W or Ctrl+E menu), Blender remembers the last used option (For eg. Mark Seam). That’s a very nice touch, and I continually count on ith while I am working. However, when the cursor gets near to the top or bottom of the window, Blender has to move the position of this floating menu, and guess what? The last used button won’t be the last used action (For eg. instead of Mark Seam, now I am marking sharp edges).

So, as a solution I thought up two different methods. Well, actually three. 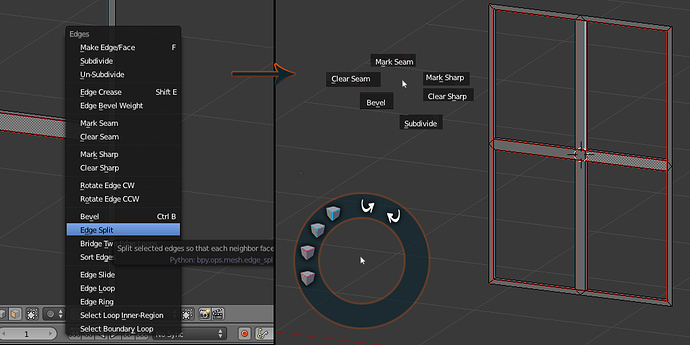 No. 1#
A nice little addon to customise these menus, so only the most used actions would be presented while we work. For example, when we work with seams and no Sharp Edges, why’d we have it lie there?

No. 2#
Make the floating menus break up into buttons, laid around the cursor, and keeping the last used button under it, so it wouldn’t matter if we get the cursor to the borders.

Make a circular selection menu, just like the Spotlight in Zbrush, and make it modular. Its crazy, right? But think about it, it might be easyer to use a stylus working like that, and I know ppl are working on tablets, even when they polymodel, but it could benefit the workflow when sculpting too.

So, what do you guys think? Am I insane to think these are possible and useful or at least fun little things that could be done, even as an addon?

I am glad that its in development already

If you go to the Info Editor Menu at the top of the default and click Window > Duplicate Window, a duplicate window appears.

I am having a hard time understanding how a “floating window” is any different than a “Duplicate Window”.

Anyone can customize a “Duplicate Window” to their hearts delight.