New to Blender gentle advice on my eye landscape 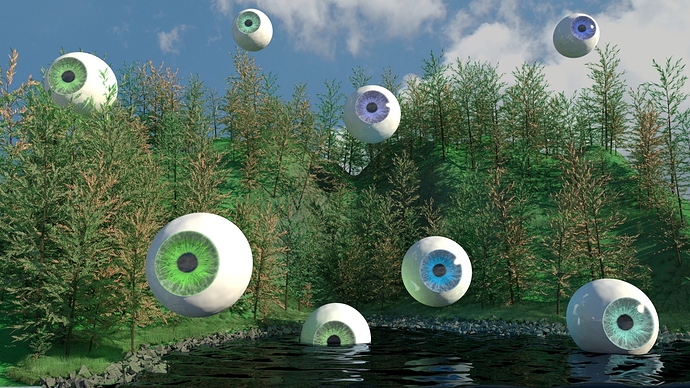 Going for a realistic landscape with surreal eyes floating in it.

I like the water and the rocks around. The leaves on the trees need work. I just added some noise displacement to break them up a bit but it does not work in the close up trees. They are a particle system with a group of three trees but I need more variety. The grass seems okay but could use a better shader.

I like the eyes but need to add more variance in the colour (some brown eyes needed).

I have tried a wide angle lens and low viewing angle to try and give a sense of size. I see the eyes as being about 2 metres tall but not sure it looks that way.

I really like the dappled light but may soften the shadows very slightly.

I think it would look better with some depth-of-field, so the trees further away were a little out of focus
The eyes might be better if they were not so uniformly white, if for example they had some blood vessels wrapping round them

Nice picture though.
A bit creepy.

Martin. Thanks for your comments.

There is a tiny bit of depth of field but I will try increasing it.

Good idea with the eyes. I will try that.

I think the materials are nicely done. Two things stick out too me and I will try my best to explain, but I’m not sure how to fix or alter them.

First the scale seems to be a bit off. I think this is because the eyes are so big my brain can’t comprehend it so it’s telling me something is wrong. I don’t know how to show the scale correctly while having objects which are not normal size in the picture.

I like what you have done. Wish I could give you better advice, but I too, am still in the early learning stages. I’m starting to see things better, but don’t know what it takes to fix.

Good luck with it.

Thanks for constructive comments. Getting the scale right is tricky.

Your idea about getting the eyes looking at different directions and maybe at each other is good, I will try it.

That’s an interesting image. It reminds me of the works of René Magritte.

Regarding the perspective on the eyes, I wonder if you would be better to put “track to” on all of them to point to the camera? (Or all except one wayward eye). I like your trees. I think it might be nice to have some dirt and/or brown grass (around here at this time of year the grass is only barely green - but then it is summer here). 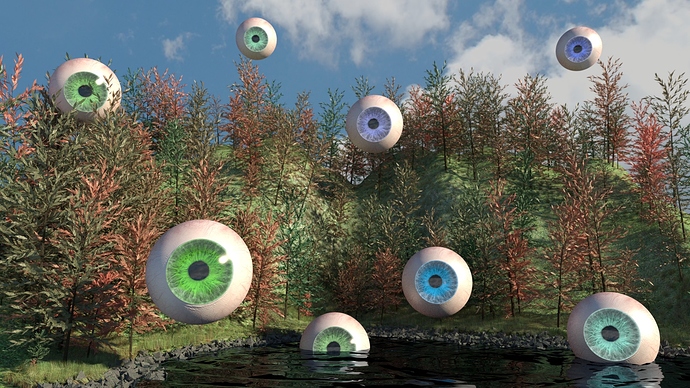 Thanks for all the feedback. I have tried implementing most of the suggestions.

The eyes are now all staring at the camera which works well but does increase the creepiness. I have added more detail to the eye white.

I have moved autumn along a bit and got more brown. The grass is more varied now and hopefully looks a bit more real.

I did increase the depth of field but it always looks too much on my quick renders and the not enough on my final. I will try increasing more and doing a full render. It does take nearly an hour to render though at full HD.

The changes are working well. The latest image looks much better.