I’m pretty new to blender, I downloaded it a while ago and just never had the motivation to play with it until recently. It took me what felt like forever to finish this rendering of my '71 Mustang project I’m building, but I learned A LOT! I know there are plenty of things wrong with this, but I don’t think it’s too bad for my first try. I probably should’ve tried someting a bit simpler for my first, but I like jumping in with both feet. I finished it off in GIMP. I’m currently working on a similar rendering of my daily driver, a '00 Mustang GT (I dig Mustangs) which is coming out a little better than this one. I should have it done in the next few days. 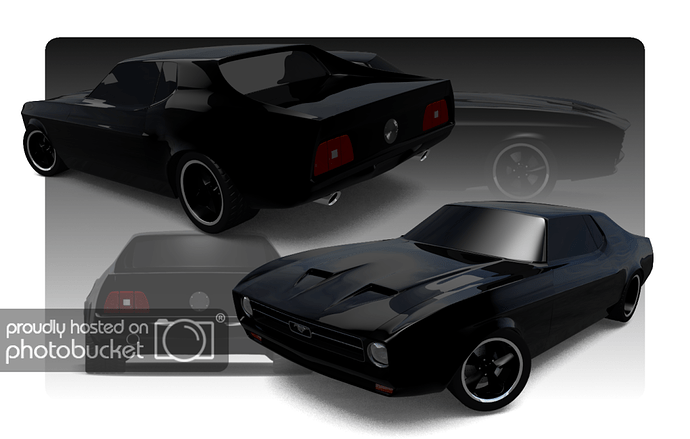 …hhmmm??? Let me know how you guys are uploading images to this site. I used a photobucket link but the quality is terrible!

Hi Obsidian71, welcome to the forums!

As part of the general fight against automated spam, new users with less that 10 posts have certain restrictions. The commonly confusing one being image uploads. If you find some work you like, leave a cheerfully constructive comment here and there and you should be able to use the forums own image attachment service.

It looks like jumping in with both feet has paid off for a first project! I know the car is quite dark intentionally, but a few more reflections on the darker side parts in future would help show off the model in my opinion. Well done.

Thanks!
As for the darkness, I was going for that look, although I agree that some more reflections would be good, I just got to a point where I needed to move on or I’d go nuts! I’ll go back to it at some point and make some adjustments when I get a little more used to how to mess with all the world settings. The one I’m almost done with of my other car has better reflections. I’ll probably post some pics of it in the next few days.

Same for me as go with the details in the dark parts. A significant optimation could be the windscreen (front, it looks a bit frosted): try to get more reflections thus matching the rear/side windows in the upper part of your image.

Here’s a redo…I actually re-did the whole car and cleaned up some stuff I didn’t like the first time around now that I know what I’m doing (kinda). I also figured out how to make my own sphere maps with accompanying HDR’s of the scene using two new apps on my iPhone

What do you think???

I like it i’ve been wanting to do a big shiny car but never got around to it, nice job

what are the apps you are using if i may ask?

what are the apps you are using if i may ask?

I use 360 panorama, it’s very simple to use but no HDR - it would be very cool to shoot HDR panoramas with the Iphone…

I used photosynth for the panorama. For a free app, I thought it worked pretty damn good! my only complaint with it is that when it stitches the shots together it sometimes mis-aligns things. If you let it do everything in “auto” mode and take the shots itself it seems to help this problem but takes a little patience to do. I’m gonna try to rig up a tripod for my phone as I think part of the issue is not being steady enough when I’m taking the shots. It doesn’t shoot in HDR, but what I did was to use a second app - pro HDR to capture a few stills of the same scene right after I took the panorama. I then adjusted the camera in blender to face roughly the same direction as my stills on the panorama, then moved my object into the camera view, rendered with alpha selected to just get the reflections from the scene, and pasted the image over one of the HDR stills in GIMP. Pro HDR will convert a standard pic into an HDR and does a pretty good job, but when I tried to convert the panorama it said the size was too large, but only by a little bit, so I’m gonna try next to shrink it slightly, convert it, then re-size it larger again in GIMP and put it into my scene and see if it looks any different with an HDR sphere map in the reflections. Over all, not too bad for a free panorama app, and a $1.99 HDR app though!

One other thing…when you shoot the panorama, you have to take the first shot roughly in the same direction your still will be in, because opposite the first shot (behind you) blender “pinches” the image when it’s sphere mapped…don’t know if there’s a way around this???

Looking good; sure there are issues, but it doesn’t stop it looking good. For a first attempt it’s truly brilliant.

I actually like how it looks; it looks like you are offering an artistic interpretation as opposed to just trying to copy real-life.