Here is a render of my newest UnWheel vehicle and a scene I have been working on for a while.
Large render; http://home.mchsi.com/~shane.horton/wsb/media/snowtownCar8.jpg Ooo… Looks pretty cool, but the lighting is off somehow.

Nice work, looks like ingame screenshot.
My crit would be this: car is just a bit too shiny, lamps don’t really look like they are working and everything is too clean, small details are missing.
But anyway I like it!

Nice scene…only crit is the street is somewhat very clean…

I like the wet pavement look, but I think the sidewalk is reflecting a little to much. I think the sky looks great. My only other crit would be that the buildings on the left seem to be receiving more light than your overall scene would suggest.

Questions:
Did you you intend to show different time periods? Your vehicle in front is very modern, while everything else, vehicles included looks 1940 ish.

How did you create the sky? Is it an image? Blender particles?

Here is the exact same lighting setup except I changed the sunlight into a lamp; large image http://home.mchsi.com/~shane.horton/wsb/media/UnWheelCar2.jpg .
OBI_Ron, I love photography and have several thousand images to use in games and scenes. The sky is one of those images.
jackblack, I agree about the lighting being off. Is the new one better? Is that all you changed? Hell, quite an improvement. Make the ground less shiny and increase the nor value to make it a bit more bumpy.

Its very good, you’ve done alot to this.

I forgot to mention it, but I lowered the scale of the two buildings in the foreground on the right side.

Looks really nice! Really well modeled street and cars and all. You should make some form of Movie in this scene you’ve got!

Here is the scene without the car. 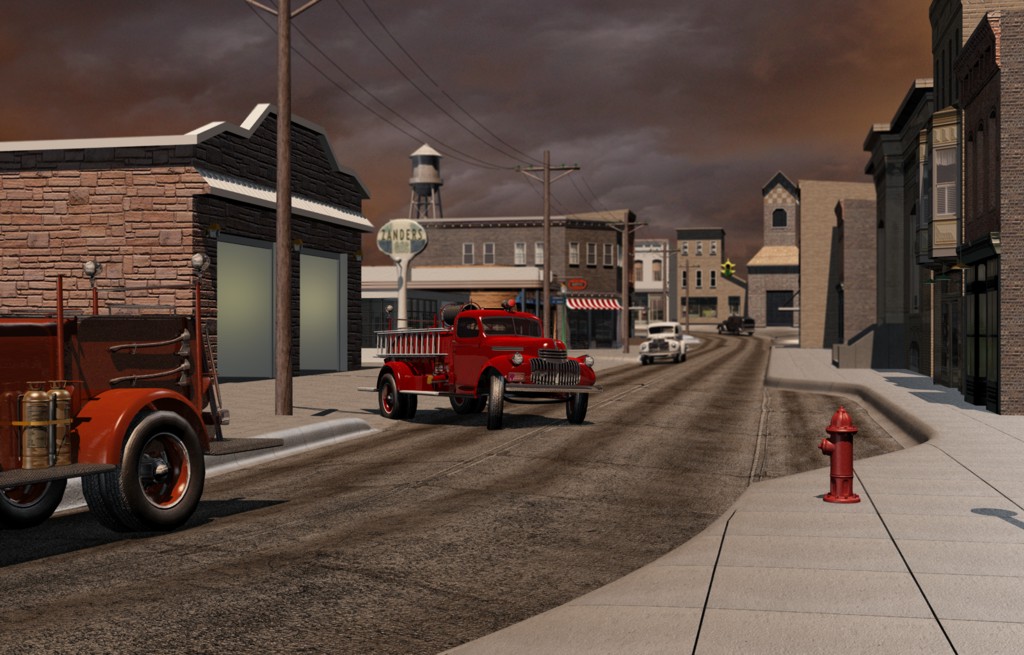 Another view from the opposite side of the street. And an image that captures a little better the look I was going for, except I didn’t like the sky. 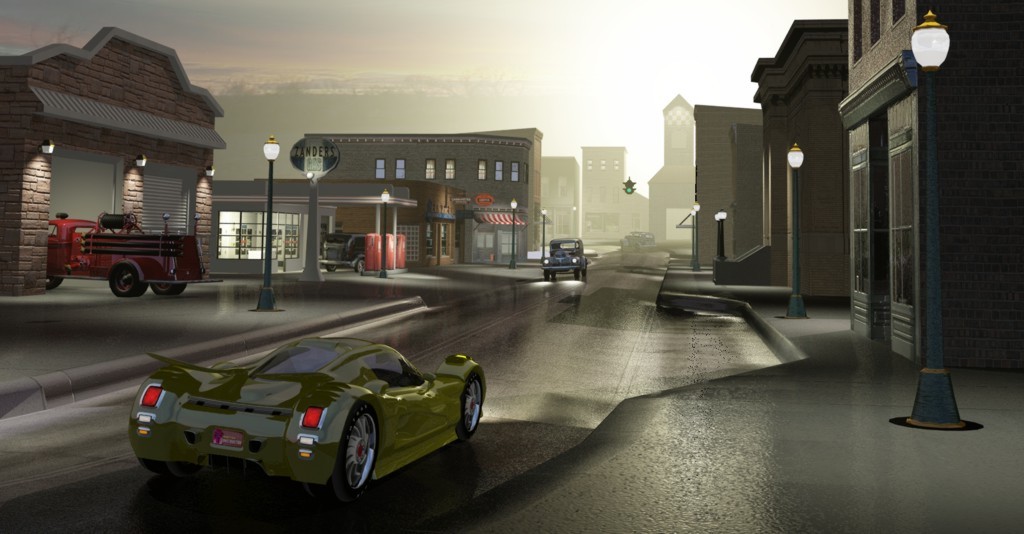 Ill give 4 stars(almost 5, but not quite). The model is regat, but the lighting is a tad iffy. As mentioned before, the lamp adjustment made a huge difference, but the emit value on the lamps is too high for hte small amount of light they are giving off.

Still, the materials and models are great. I love the window texture on the right of the image. Like bubbly greenish glass.

Any suggestions on how to improve the lighting? I am not sure what you mean by “the emit value on the lamps is too high for the small amount of light they are giving off”. The main lamp is a raytraced sunlight with an energy setting of 6.5, the other two are unraytraced sunlights with a light gray/blue color and an energy of 1.5. Renders done with Yafray.