I’m just working my way around the NAV controls now. There are a couple of commands I hope to find, but so far, have not. Blender probably has them, since much lesser programs have them. Maybe you can tell me where they are.

What does this mean ? Full screen ? If so Ctrl+up arrow. Home key for fit to view

What does this mean. Not to move the 3d curser by mistake ? If so change the shortcut to something not very common so you don’t move it by mistake

What does this mean ? Ctrl+Z is undo, F3 is history

Thanks Richard. Sorry if I was vague.

Window Fit All displays every object in the scene in the window at the same time, without changing the user’s point of view. It’s faster than maneuvering, and handy if (like me) you’ve lost track of your stuff. I see that Home sometimes does this. I asked about Window Fit All because I’ve seen it in other programs.

3D Cursor Lock would be, for example, checking a Lock checkbox that stopped the 3D Cursor from moving, ever again, until I explicitly uncheck the box. A Hide option would be equally useful.

And I see that sometimes, CTRL-Z works as I expected. I’m finding that the operation of many controls is contextual, and that the contexts are not yet clear to me. I will need practice.

As long as we’re gathered here, let me ask an even stupider question. For me, it would be great to swap Cartesian Coordinates Y and Z, so that Y was height and Z was depth. I wouldn’t be able to do that, would I? My guess is, no, but it is sometimes better to ask than to assume.

your “fit al” command(when in the 3d viewer object mode) will be “view–>view all” or to just view all the objects selected “view–>a;ign view–>view selected” neither will rotate the view point but they will zoom it out and pan it. 3d cursor only moves when you left click, if it was on a selected object(or vertex in edit mode) you can rapidly get it back after accidentally left clicking there using “object–>snap–>cursor to selected”. ctrl +z will undo but there is no control for flicking back to a previous view point.
with cartesian co-ordinates the man’s name was rene descarte, in blender x axis is left and right, y is forward and back, z is up and down. on a 2d graph y is up, but i guess that the reason we use z for up-down in 3d is because descarte imagined a 2d graph lying on a table. a quick and helpful way to think about the rotations on the axis is imagine an aircraft, rotate on the x-axis is pitch, nose up or down. rotate on the y axis is roll and rotate on the z axis is yaw. you could “swap” co-ordinates by rotating all your models and such(if you use game engine gravity could be set to act along negative rather than negative z), the automatic grid loaded into blender can also be made to appear on different axes but it would make things more confusing for you when you try and do anything in 3d co-ordinates outside of blender on your own computer.

Cartesian coordinates are implemented differently depending on the program. Poser and DAZ Studio use Y as vertical, and Z for depth. (This happens to be the way I learned it when studying magnetic field theory, so I thought it was some kind of a standard.) Carrara uses Y for depth, as does Blender. The thing is, Blender is the only one of them that offers 16 full pages of keyboard shortcuts. That’s more than everybody else put together. It is easy for a new user like me to get the idea that anything might be possible. How could I know?

More seems to perform differently when accessed from the menu than from the number keypad. I haven’t worked that one out yet. I’ve read something about Blender acquiring the ability to memorize the “view” in the next iteration of the program. I will await that. For now, I’ve found that +, -, and middle mouse button get me around fairly well.

On the plus side, I have nothing but praise for Blender’s ability to let me set the UI color and font size. Some mistakenly believe these are “style” issues for “artistes” to deal with. At 2560x1440, these are purely usability issues. The trendy gray text on a black background doesn’t help any either. At 4K, you won’t be able to read these screens with a pair of jeweler’s loops. Blender is out front on this one. I expect that in the future, Blender will also allow the icons to scale.

I expect that in the future, Blender will also allow the icons to scale.

The control below already scales icons as well as text & other UI components. 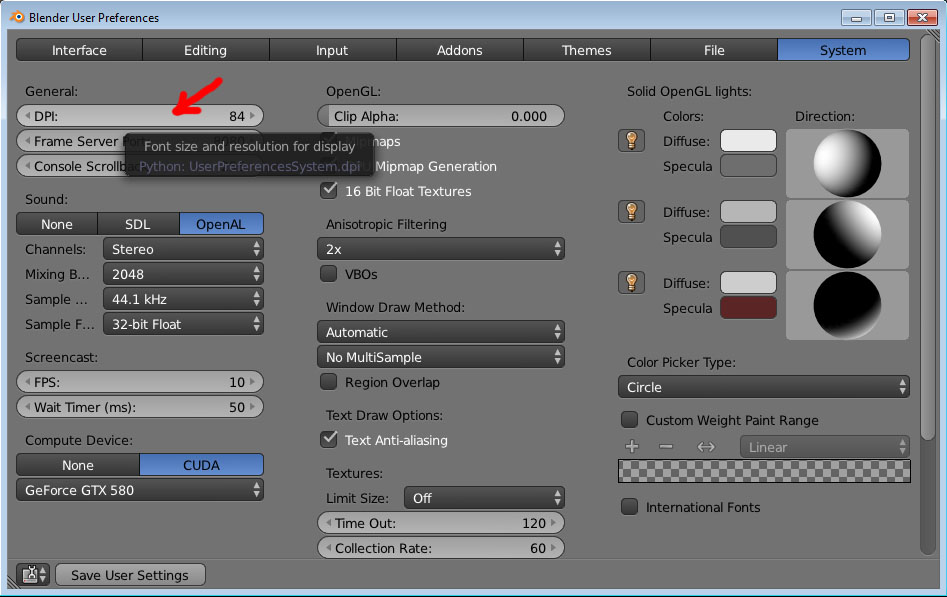 The control below already scales icons as well as text & other UI components.

Wa! I’ll be damned! You sure made my day! Thank you!

I only knew about the Themes settings. I’m gonna do my customizing over now.

This post is for the benefit of other new users.
…

I was having trouble with some of Blender’s keyboard shortcuts. Even being mindful of the contextual nature of the Blender UI, I still couldn’t get certain commands to function in a consistent manner. This week I accidentally discovered the reason.

To me, this is major. I’ve never seen anything like it. I haven’t seen it mentioned anywhere. At last I can actually try out the long list of keyboard shortcuts. If you’re new as I am, you may find this helpful.