I’m new to Blender, and after going through a whole lot of tutorials, I’m trying to model one of my favorite household items- my trusty espresso maker (see pic). 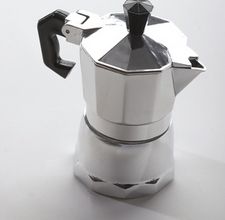 Starting with just the top chamber:

I have several challenges here:

It looks ok- but here’s my problem- I want it to look exactly the same on each surface. I don’t think there’s a “radial mirror”- is there?

Thanks everyone for your help!

Welcome to this forum

I don’t think there’s a “radial mirror”- is there?

Yes there is, it’s called the spin tool. I suggest you familiarize yourself with the different tools available. There is a good set of tutorials.
I had some problems following your description. It might be a good idea to post and image (rendering, wireframe rendering, screenshot) to bring your point across more clearly.

I would try to keep the parts as the same model but it would probably not be the end of the world if they were separate since this is a learning project. I thing is a good thing to try things out differently on your own; That is how you develop the ‘deep knowledge’ where you understand what you are doing instead of just repeating what others have told you.

I’m just learning and I started out on organic models so I have never really had to do something this geometrical. There are a couple of ways to ‘sharpen’ an edge when working with a subdivision model.

Check out my 5-second model job here. I made a ‘circle’ with 10 vertices, subdivided the mesh, extruded it up, scaled it out a bit. Then I added the “sub-division surface” modifier and added some edge loops to a few of the vertices to tighten them up a bit. I let the others alone so you could see the before-and-after. Try “creasing” some of the other edges or playing with the “edge split” modifier to see if you can get them to do what you want.

I personally don’t think you need proportional editing enabled for something like this.