YouTube’s algorithm gave me the following video of creating a VTube avatar (note- may be NSFW), and I was amazed; then noted the creator has something set up so that he can sketch out a rough cage (in edit mode?) and Blender is creating a smooth surface.

You can see it pretty clearly at 3:52, as he creates the head:

Later on he uses it to great effects creating hair, and ribbons.

Unfortunately I can’t catch the modifiers(?) or any other clues to figure out how it’s setup… and I lack the vocabulary to describe the process better to google.

Can anyone suggest what the setup is (mode/addon/modifiers?) that he’s using?

Very popular for both organic and and hard surface modeling.

Putting edges at equal distancing from each other will make a smooth flow while moving edges closer together will harden the surface.

That works a treat!

Do you know if it’s possible to have a similar display with the multi-resolution modifier?
i.e. show both the base geometry + the multires smoothed surface?

Do you know if it’s possible to have a similar display with the multi-resolution modifier?
i.e. show both the base geometry + the multires smoothed surface?

Not that i know of, it doesn’t function entirely the same way so it might be a limitation.

Yes, in the “N” toolbar, go to Tool > Options and disable fast navigate. 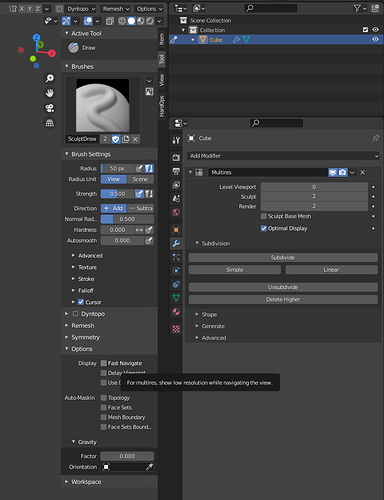