I recently finished a project in Cycles. It’s a “Nighthawk Deluxe” spacecraft. To make this one, I based myself on the french «Dassault Rafale» aircraft. I wanted to see what you would advise me to improve in this or another spaceship project in the future (perhaps less compositing for example? I feel I might have exaggerated on it). Don’t get into too complex talk with me please, I started Blender only four months and a half ago.

I take no credit for the background. 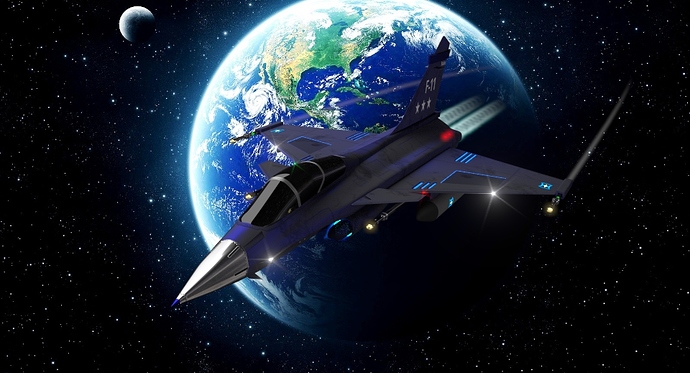 4 months! Did you have experience in CG before hand? Pretty good, one thing being it looks like a normal plane, but that’s actually an interesting take on the idea.

The cockpit looks a bit low-poly though. Maybe smooth it out a tad.

No, Blender is the first 3D program I’m trying. Well, I did try using Google Sketchup a few years ago, but I found it too difficult to use and stopped mere days after having started.

I tried adding loop-cuts on the cockpit’s window, but that didn’t help. I don’t think the problem doesn’t comes from the window being low poly, what I think is that there is something wrong with the flow of the vertices of the cockpit as I used the subsurf modifier. So I tried moving vertices to make the flow better. The things is that, when going to wireframe display, the flow looks normal in some places where the reflection looks strange, while in others I can’t fix the flow.