Hey there! I know I haven’t posted any work here lately, but now I’m at it again. This is my latest project, by which I intend to improve my rendering (mats/compositing/lighting), but I have the feeling that I need help. I’ve looked at so many of my crappy renders that I think someone’s fresh eye could find a lot of mistakes that I haven’t.

So here’s what I’ve got right now. I’m out of ideas to improve it.

Lighting is a custom hdri texture I made with Gimp, there’s no other light source, and backdrop plane only has camera ray visibility.

Please be as harsh as posible, for I know there must be a lot of things to improve.

Thanks in advance,
Impreza09

Nice model overall, not quite true to its real counterpart but nevetheless recognizable.

I like how rims look, they really, and I mean really, look good in you render, so good, that break disks and calipers look cartoonish - colorwise. The break disk does not look like its made out of metal, and it does not look like cheramic one either. For realistic sake I would go with stock breaks and caliper, some metal look to it, so that it blends well with the rim, I think it shouldn’t stand out, make it even smaller. Because now its very eyecatching (if it looked realistic color wise it would not be a proble) or move caliper to the other side of the disk, so that is covered by the rim a bit, but for example tyre is not visible at all, make it visible, not really well, but at least to the amount you can see a little bit of thread.

Color of car body is pretty good, but at the same time it looks kind of fake, I think thats because there are no light reflections in it, e.g. multiple lamps being reflected etc., now it looks like game model because of that (apart from rims which are very lifelike IMHO).

Also you can make ground a bit reflective, so that you can see washed out reflection of the car in it. it might add to realism a bit.

You see now it looks very simplified, there is not much going on, like I said, more reflections, both on the car body, windshields and on the gound, more detailed render of tyres, make them more visible, better color/textures for breaks.

Thanks for the critique. I’ve taken in mind what you’ve said, and I think that wheels do look better now. However I still have mixed feelings about carpaint / lighting. I think it’s those highlights that I’ve added that were lacking, however I couldn’t use an hdri to do this so had to make all the lighting from scratch. However, since I haven’t found any photos of the Skyline in a studio ambient, I don’t know what colors to aim to… 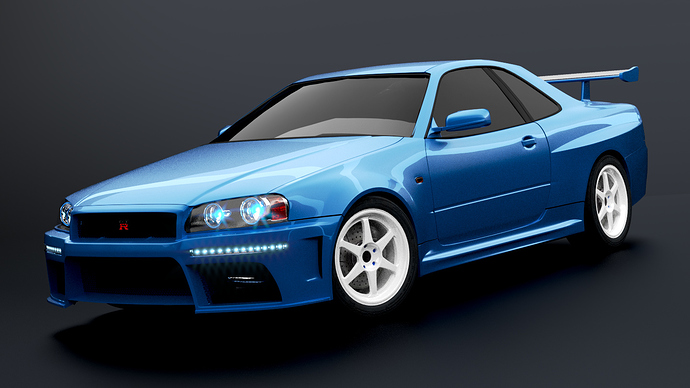 Be aware that the background is not the final thing, and I know the GT-R Logo is a bit behind the grille. It’s fixed now, but I don’t want to wait for it to render again…

Most of it is looking pretty good. I’d say the nest thing to improve would be the headlights if possible, just my opinion though.

because of the massive dark shadows on the ground the cars seems to float above the ground. i would reduce the shadow density in the front area for this purpose.

Thanks for comments. Will fix the Skyline as soon as I’m done with another project. You must understand that I spent quite a long time with the Nissan, and I don’t kinda work on it anymore right now… Which doesn’t mean I won’t finish it.

Hey there, I have finally something to post that I’m somehow satisfied with. A lot has happened in my since I last posted here, but after some deep talks with some friends and a school trip to Paris, I has an inpiration of what I wanted this car to look like. I’ve also discovered where I was wrong all the time in rendering… There isn’t a perfect way to do it, but it’s rather art, and thus subjective.

Yet I’m posting my renders here, because I feel that I can still learn much in the area of compositing, since I’m quite lost, seeing the things people do with the node editor, and haven’t an idea of what to begin with…

So yeah, critique, please, if you will.

Also… to those who remember… BMW 850 CSi is getting finished finally!

PS: Would a slight vignette do any good?

I keep trying… This time I went for a more agressive, less clean look.

Please do tell me what you think… anything, absolutely any thought is appreciated… I still don’t know what to do as a final render… I mean, are #8 and #9 an improvement? Which one do you prefer, #8 or #9? What can be improved/changed?

I keep trying… This time I went for a more agressive, less clean look.

Please do tell me what you think… anything, absolutely any thought is appreciated… I still don’t know what to do as a final render… I mean, are #8 and #9 an improvement? Which one do you prefer, #8 or #9? What can be improved/changed?

It’s looking really nice.
There are a few things only bugging me:

The grain on the right-side, and the front right wheel that doesn’t seems to be touching the ground right (I don’t know how to explain, but I think it should be a bit more “flat” due car weight)

Thanks! I’ve fixed the wheel, even though the way I’ve changed the camera angle doesn’t show it… I couldn’t really fix the grain, because I’d have to change the lighting in a way it would mess up the whole thing

… Don’t really know what bugs you about it… Is it distracting, does it take too much attention?

Anyways, here goes the next version. My friend Xelus, whom you may know from having his cars featured in the gallery several times, has pointed out to me some topology issues and gave me some tips. Thanks a lot, man! So this is the result…

As you can see, it is a mix between #8 and #9, and I think that should be fine. I am quite content with the current state, but I really want it to be as perfect as possible before posting in on the Finished Projects page, so I am totally open to any critique.

I’ve been very busy with studying this week, but it’s finally Friday and I have time to work on this again! Tbh, I still have some detailing to do on the rear end, which is why I haven’t posted any renders of it, but atm I’ve been working on the lighting, which thanks to some friends I’ve had some inspiration on how to improve it. So this is it:

Is it an improvement?

PS: forgot the vignette… but will not forget next time

I think the modelling and materials look pretty damn great - though I’m not sure what you’re trying to achieve with your renders. If you’re trying to do a studio render, make the ground look a bit less like asphalt, and either get a studio HDRI, or even better: manually place lighting planes to light up the scene and get nice tailored reflections in the car paint.

Thanks a lot, you made my day answering so fast! I was going for a studio render (I’m also planning to make an outdoors scene and a backplate integration, but seeing how things are, I doubt I’ll have the time anytime soon), but I thought it would be cool to add something of interest to scene in which DOF could be appreciated, just for the sake of experimenting. The lighting consists of a custom gradient texture applied to the world + an emitter plane with a gradient on the side to get the lower reflection and also some planes to enphasize the grille with the GT-R logo and give some reflections in general to the bumper, but just mildly.

I will try the “full studio” setup as soon as I have time.

So this is it… however I’ve been told it looks flat and unrealistic… Don’t really know what to think right now. Again, this is becoming so much more complex than I thought…

As you can see, I’ve used very soft lighting, which is what was used in the photographs I like. I personally like it… but, sometimes, after working a lot on the same projects I’m a bit blind.

I like the latest render the best. The windows should have some transparency and I would remove the glare streaks in the headlights.

Thanks! I think that’s the style I’ll stick with for the final render. I’ve decided to redo the headlights completely, and will change the post-pro in them too. I’ve posting most progress here tho: http://www.smcars.net/threads/skyline-r34.41064/

Yes its look flat and unrealistic. For car renders, its all about reflections/specular passes what counts. Usually car render doesnt need Global Illumination (GI), because there are almost none objects near each other. Thats my opinion anyway

looks better and better! a little bit of glowing at the light areas (need for speed style) would fit well. like your improvements!

Thanks a lot! Will see what I can do (when I have time that is). I don’t know when I’ll post the next update since I’m not done with school yet (egh) but at least I’m oficially done with modelling, as you can see in the SMC thread.