Chip said “Please chime in if you have any better ideas”. What you are doing is very good but does not match perfectly to my specific desires. I’m waiting for a stable Animation Nodes, or perhaps Everything Nodes, for B2.8. Programming or specifically node style programming is not the style for everyone but for me this really will be a game changer for creating parameterized models.
(I’m a very tiny support of yours a long time ago by getting a license for GridModeler for Eon’s Vue.)

GridModeler… Goes back a few years. Actually launched it a few weeks ago when I needed to make some tileable textures and was surprised it still worked.

Discussion about Blender, and the commercialization of the Blender ecosystem
bkjernisted (bkjernisted) June 7, 2019, 2:43pm #26

If these tutorials are anything like your eevee tutorials they will be outstanding. I am looking forward to their release.

Hey all, I have the first video up at

Sorry it took so long. I’m starting on the second video now.

Pretty cool! Keep it up!

Try Fusion 360. Its has a non-destructuve workflow.
Here’s one simple example that could be a bit harder to do with poly modeling: https://www.dropbox.com/s/focce8y0x9opo1r/Example.obj?dl=0
Here you can easily change shape of the “box”, radius of the hole(s), bevels, and number of holes. All being non-destructive.

I don’t know Fusion 360 and Modo how works.
I used Maya’s Hard Mesh.Only Boolean modifiers, nothing else. If delete history means apply modifier. It will not edit.

In Blender not only Boolean modifiers, but bevel , screw, solidify,array, pipe, etc and without apply modifier. Blender Winner !!!

Try Fusion 360. Its has a non-destructuve workflow.

CAD is typically thought as an engineering tool. If you look at the computer keyboard you are typing on today, chances are the keys are plastic. To be able to manufacture something with such exacting requirements needs a program that can keep track of very small tolerances, while still being able to create the “constructive solid geometry” that is needed to create a mold for the item all the while calculating offsets to handle things like shrink factors, sprue location, ejector pins, draft angles, and other plastic molding techniques.

These programs can also help create the molds, do stress and heat analysis, create machine paths for metal cutting and so much more. And many of them typically cost so much more as well.

Solids are so much better for working in the real world, and if you had a 3D printer, you’d understand instantly. 3D prints are “watertight and manifold.” This means they’re solid. CAD programs can only create solids, just as you can only create solids in your workshop with wood, nails, glue, etc…

With Blender, it’s easy to create non-solid models. It may be a microscopic hole or a flipped poly or a one sided surface. There are a myriad of ways to build non manifold geometry in surface modelers. Trying to fix it can be very time consuming. I used to use surface modelers for my 3D printing, then switched to Moi (a solid modeler) and all of a sudden things got so very much simpler.

The other thing is surface modelers work with polygons, not NURBS. So, the “atomic” unit of a surface modeler is a face or polygon, which has a “facet” and so it’s not possible to represent exactly a curved surface in a poly modeler. This can come into problem when you’re trying to solve for multiple continuous surfaces, such as where a car fender meets the hood of a car. A very difficult math problem indeed.

One HUGE downside to CAD and NURBS is the convert to polygons issue. It’s very difficult to create any sort of clean (and human editable) mesh when converting from NURBS. Moi probably has the best converter I’ve ever seen, and it still has problems. The resulting mesh is typically impossible to work with unless you retopo it. Check this CAD to Poly mesh I created years ago to help show the problem. 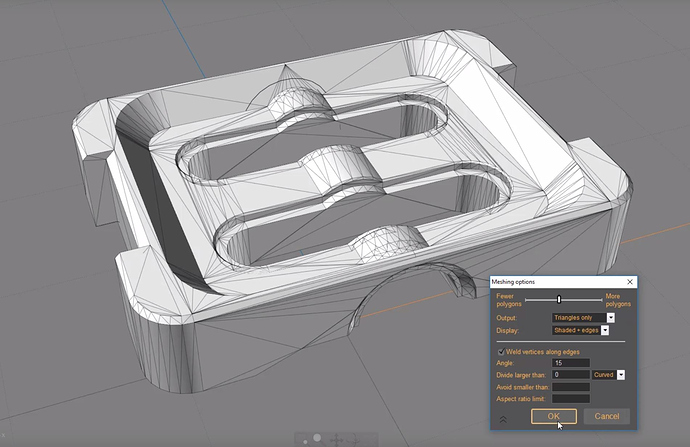 Even if you don’t put too much weight in poly topology, CAD topology is just horrendous. Perfect poly topology is great if you need to animate/deform a character (think stretchy bounce of an M&M). It provides much less value for Hard Surface models, and in fact, IMO, the Sub-D route is overthought and overused.

I don’t know of any other poly modelers which have the modifier stack like Blender (perhaps Houdini, which I don’t use). Certainly an UNDO history is not what we’re talking about here. NITROX3D is focused on the iterative manipulation of the modifier stack to infinitely tweak proportion and details. That is not possible with UNDO. While it is possible (to an extent) with CAD, there is significant work in setting up such a parametricized workflow.

Here’s one simple example that could be a bit harder to do with poly modeling: https://www.dropbox.com/s/focce8y0x9opo1r/Example.obj?dl=0
H

I don’t know Maya’s plugin, but if it’s API is anything like Blender’s, this process should not require an addon or plugin. The features are already there in the program.

I do doubt that MeshFusion could easily replicate this workflow. Consider the number of polys used to create the full geometry.

in fact, IMO, the Sub-D route is overthought and overused.

any other poly modelers which have the modifier stack like Blender 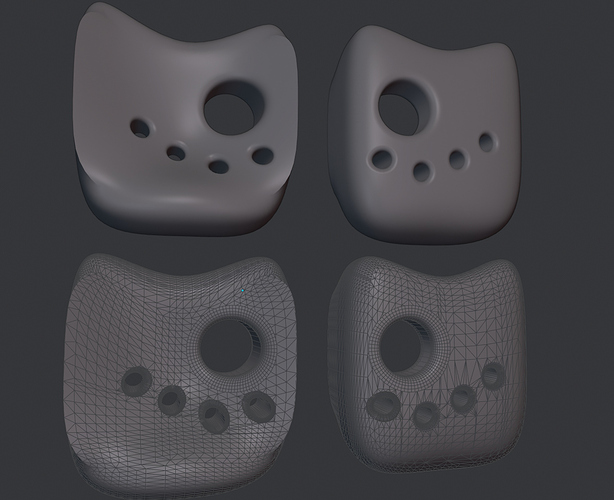 Note, the big hole was cut by me using Offset Cut, had to test it. The rest could easily be done with subd modeling.

Thanks MACHIN3, didn’t know-- always hated Max. Does it work like Blender’s?

I’m not even sure what that is? Seems very arbitrary, and easy to duplicate in a myriad of ways. Not even sure I’d call it hard surface modeleing…

Note, the big hole was cut by me using Offset Cut, had to test it.

As far as I remember yes, but it’s been a long time since I’ve used it. They even had an edit mesh/poly modifier back then, which means you can do manual mesh edits in the stack.

They even had an edit mesh/poly modifier back then, which means you can do manual mesh edits in the stack.

yup, and an analogue of Bevel modifier which called Chamfer in Max https://www.youtube.com/watch?v=4421PPbAHLw

I wish Blender has Edit Poly. It can be very powerful.

This is all very interesting. Thank you @chippwalters for getting this ball rolling.
I myself am a Product & Concept designer. I went from Autodesk Inventor to Fusion 360, but I have been actively looking for a replacement as the Fusion 360 -> Blender Cycles workflow is a pain to say the least.

This modelling technique, however, is difficult to wrap my head around (as it’s very different to solid or poly modelling). It’s much simpler, I suppose, when you have a reference, but how does it work with creating concepts? How far do you have to plan ahead? Can you just work-and-create?

Thanks again, can’t wait to hear more about this!

I used 3dsmax for more than 10 years.
3dsmax modifier stack is a lot more powerful than Blender’s.
Max can also do a lot more complex and powerful mesh operations.

But I am still very new to Blender and its very likely that I simply didn’t find how to do same things in Blender yet. My intent is not to crap on Blender.

I really love how fast it is to do something in Blender. It has very fast object manipulation and direct modeling. Max is crappy in that aspect.

Awesome!
Sorry, what’s Offset Cut? I wasnt able to find anything on it.
I’m still new to Blender.

EDIT: I see… https://www.youtube.com/watch?v=GKQIv29oow8
Its your addon. I dont have it yet. But I’m very interested in getting it because that stuff looks outstanding.

I’d like to see how to achieve similar results to my Fusion 360 example in Blender with the goal to possibly get a cleaner mesh. Do you plan on doing some examples like that?
Thanks!

Feel free to take a look into Fusion 360 (free for learning). Maybe you get some ideas from it