No One Knows Where This Video Came From Or How It Was Made, And It’s Freaking People

No description of any kind with a sensational headline? I don’t think I want to know where the link goes then.

Weird
some dude rambling about virus’s and stuff

but I think the skeletons gave away the troll attempt.

Obviously this is the illuminati warning us of the end times and we should all bow down to the secret one world government that is controlling our minds to make us believe this is a hoax.

you know,
deus ex is only a video game and xfiles is only a tv show
just saying.

… and these writings are just some lines. To blind there’s no light. (?)

The site the link opens on. 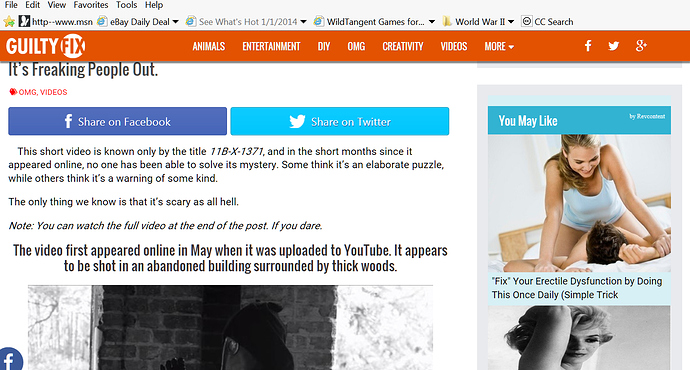 It appears that it might be some type of psychological warfare weapon design to convince some anonymous internet viewer, or viewers, to make an attempt on the president’s life. In other words some world power is attempting to assassinate the US president.

No One Knows […] How It Was Made, And It’s Freaking People

Huh? I see nothing in this video which would be difficult (or even impossible) to make with halfway current video and sound editing techniques. Why would anyone freak out about a random hoax video by some pothead, who obviously watched “The Ring” too often?

who exactly is it freaking? only, this is the first i’ve heard of it so it’s obviously not the massive event you’re implying it is.

However, it should also be said that it is never a good idea to create, or to promote(!), a video that advocates an act of violence … against a Head of State or otherwise.

In addition to this being a Federal crime, it also promotes depriving two beautiful daughters of their Dad just because the man signed up to try to do the most-impossible job in America for eight years. And it won’t accomplish a damn thing.

If you’re frustrated … and you should be … then focus your energies on doing something about it. Not promoting violent crime.

you know,
deus ex is only a video game and xfiles is only a tv show
just saying.

Except that a shadow government exits. That was denied until recently.

The title of the damn thread was copy and pasted from the site in the link. I thought maybe the younger blender heads on here might be interested. In other words it was not my intention to imply shit. I simply didn’t use quotation marks. Be rest assured it won’t happen again.

I didn’t watch the vid…just the stills…but it screams ‘art student project’ to me. I have seen a lot of art films, and have attended an art school where this kind of imagery was the bread and butter. the lighting, the camera motion, etc. convinces me it is some persons art project. I don’t think it’s intended as a message.

I dunno man, an art project with an anagram that says “kill the president” seems a bit over the line don’t you think?

I didn’t notice that part, but it is possible the video was never meant for general public consumption. It is the style of the thing that makes me see it as an art project. It is geared to make the viewer feel uneasy, like the film ‘eraserhead’, and the feel of it is not unique. this was made by an artist, who studied art. they may have added that just to add to the disturbing quality, which clearly is the aim.

I dunno man, an art project with an anagram that says “kill the president” seems a bit over the line don’t you think?

If it was, then posting it on BA may have constituted a serious breach in the forum rules (if the thread wasn’t already afoul of them because forum policy frowns on threads that just give a link with no context).

There’s nothing funny about promoting an assassination of the US president and he should be thankful if the mods. let him off easy.

I know this video was supposedly filmed in another country, but here in the states threatening the president is a federal crime. In fact, correct me if I’m wrong, I believe it’s a crime to threaten anyone, it’s just taken more seriously when it’s the president.

What I think a lot of average people don’t understand, because they don’t think the same way, is that there are people out there who have different thought processes. This video, in my opinion, was intended to take advantage of those who look at things differently. Of the thousands or millions of people who see this film there are going to be a few who look at the video and think that it’s some type of message ‘meant’ for them.

For instance Charles Manson believed that the song Helter Skelter was speaking directly to him and instructing him to do the things that he did. People like this still exist. The difference here is that, unlike Helter Skelter, this video was purposely produced to ‘speak’ to those people. This video was, again in my opinion, produced by someone that knows this.

It’s the perfect crime because if one of those people do actually attack the president they have no ties to any covert organization or foreign power, no one knows who was behind it. The US has many enemies, it could be any one of them.