Nobody ever models bicycles.

I’m taking a class on 3-D modelling, and one of the assignments was to model our car. I don’t have a car, so I made my bicycle. I did a quick search on this forum to see if anyone else has made a bicycle, and I really didn’t find anything except motorcycles, so here’s one.

They didn’t appear in the render, but I have paths laid down for the cables to the gear shifters & brakes. Modelling those things are going to be crazy. Note the nubbins on the bottom of the top frame bar that the brake cables pass through. There’s going to be lots of detail here… too bad I don’t like texturing. I’ll probably just do something shiny and chromey.

The seat is air cushioned. The steering is psychic. 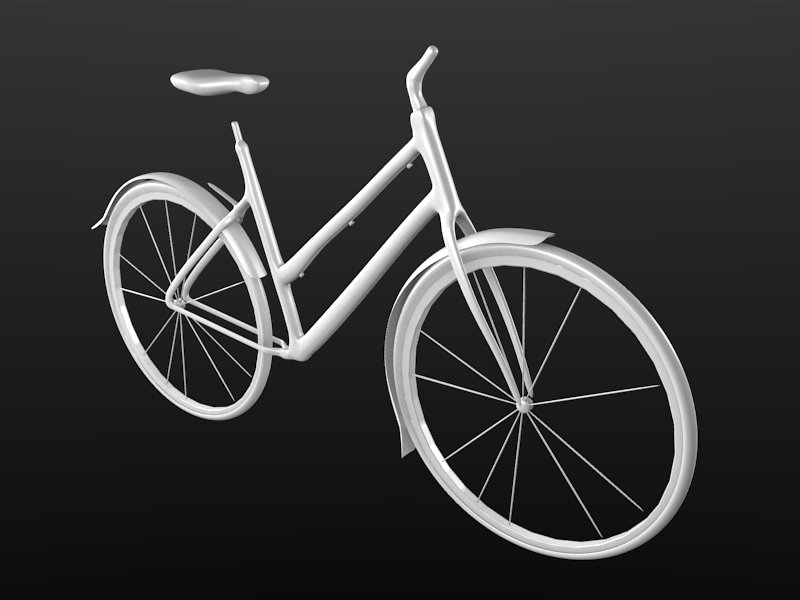 how will you turn the front wheel when the fork holding it is part of the frame ? i think you need to fix that little problem…

i would break your meshes down into more parts to. its easier to model, and if you don’t like to texture that much, it will help with that process to.

definetly take a look at the front fork. you will see what i mean if you actually try to picture turning the wheel in your head.

nice call. I haven’t considered that at all, actually.

Did you check with your instructor that a bicycle instead of a car was ok?

A car will be quite a bit more of a challenge in general and thus your instructor might not consider such a substitution acceptable.

on katorlegaz.com you can download (?) blenderman magazine, the second issue has a really nice bike chain tutorial. If i have that name wrong, google katorlegaz, or blenderman.

Lol, Knellotron you ride a girls bike :]
Unless you are a girl, then it’s not funny.

Pseudo teenage BS aside, i’d say, being a day to day biker myself I wouldn’t dream of modelling my bike.
All those screws and chains, yuk.

Stephen has a point. it’s also on the backfork.
The fork holds an axis and that axis screwed to the fork on the side, but i’m sure you found that out by now.
But I guess you’ll have to check your teacher for what kind of detail actually has to go into the model.
With a bike you can go extremely far if youhave to model the brakes too.
P

It is a girls bike, but it’s not my bike. I just thought it looked nice. My ex-girlfriend was a professional cyclist (she was in the Olympics) for a couple years, so there’s sort of a reference to her with this.

The class I’m in is way too laid back, and the teacher likes everything I do, so the bicycle isn’t an issue. In fact, it’s so laid back that the teacher lets me use Blender when everyone else is in either Maya or Strata. It’s just a general 3-D imaging class, but the emphasis is on modelling. I am learning Maya for the class and for my own interest, but I can work much faster in Blender. It gets that compliment a lot, I’ve noticed. There was another guy in the class who did a motorcycle, but that had less detail than this model already has.

I have the front fork worked out now. It’s seperated from the main frame, then connects to the top piece of the handlebar, like a real bike. I’m planning on adding a lot of detail to this. I won’t be uploading that many more pictures until it’s finished, but here’s the same thing with ambient occlusion on.

I really like the use of creases on the tires. Even without the textures, you can tell the metal part from the rubber part. 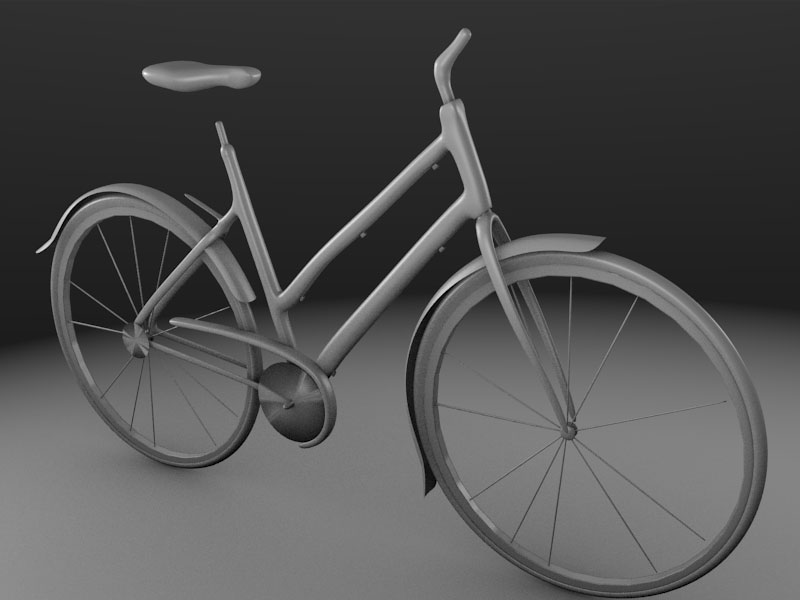 Looking good so far. I would consider more realistic spokes. The ones you have seem to be distributed non-uniformly. I did a bike tire and wheel myself…unfortunately I don’t have the model here with me right now. Use dupliverts for the knobs on the tires if you want that much detail. Good luck!

Actually, I’m not using dupliverts / spin for the spokes because I don’t want them distributed evenly. Real bike spokes are rather complicated.

I am using dupliframes for the chains, though.

there was a dude, who modeled a really impressive mountain bike with just using meta objects, forget the link though…