This is a sketchy description of a half-baked idea for an improvement to the Add Node menu.

One thing that slows me down when working with nodes is finding the right type of node to put between existing nodes. Sometimes I want some curve or ramp node, or maybe a math node, but not sure where to find a suitable one in the existing menu - “Color”, or “Vector”, maybe “Converter”? 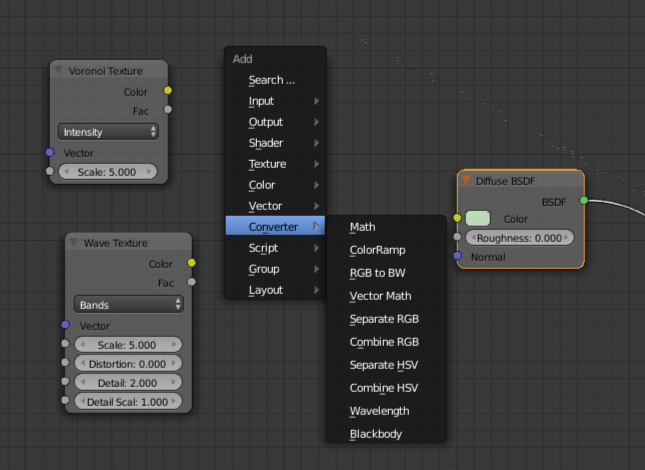 What I do know is: I have a yellow source, and want to feed a yellow input. I also know I don’t want an ultimate input or output node, but an in-between. Wouldn’t it be nice to pop up a menu showing all inputs-yellow-outputs-yellow node types? Or I might be trying insane experiments, and want to know what nodes could be fed the green output of a shader., besides the Material Output or Mix or Add shaders.

Among the Ramp and Curves nodes, it’s never been clear which one I should want and where to find it quickly. “Takes blue and puts out green” is clearer in my mind than categories like Texture, Color, Converter etc.

What I have in mind is something like this: 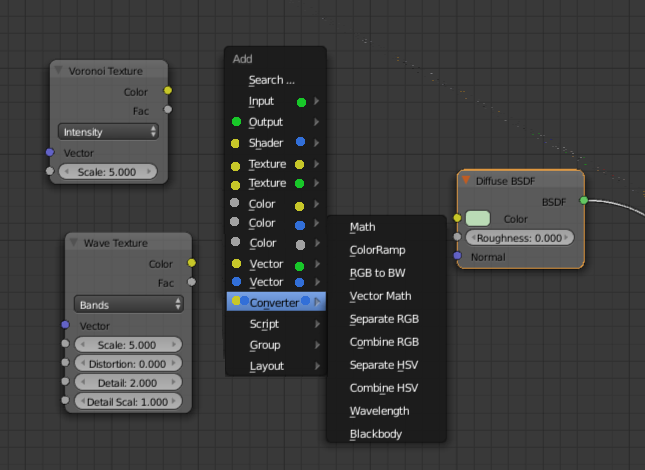 This was hacked up without regard for reality - colors picked at random. Just the idea that the menu could show what types of signal a node takes, and puts out, with the nodes sorted into separate categories. Not sure if I want “Color” or “Converter” or what, but my eyes can easily spot a pair of yellow dots or whatever combo needed.

Nodes with two or more different types of inputs, well, I don’t know. Many nodes take scalar (gray) secondary inputs which may be assumed, not needing to be shown, unless gray in/outs are the only in/outs. For example RGB Curves has a yellow color input which is the “interesting” input, while the “fac” input can be quietly assumed to exist.

Or maybe put colored dots in the submenus only, with the specific nodes, and keep the top-level menu the same. (The wind changes direction often during my brainstorms!) Then we wouldn’t need redundant top-level items, like the three Color items in my hackjob example.

Okay, your turn… play with this idea, tear it apart, poke at the thought balloons… I don’t recall seeing this idea floated in any forum anywhere, so far. Let me know if this is redundant with some old rejected proposal of long ago, or has been tried and discarded with last centuries worn-out disco records. For now I expect only discussion and further brainstorming, not to see a shiny new feature anytime soon.

Expanded, that might make a nice PDF to print on a color printer, laminate and have on the desk on top of that pile of paper that never seems to go away.

Hi Daren I get where you are coming from but as you use the Nodes you will realize that that color scheme is actually helpful but misleading - almost any node can usefully be connected to any other (except for some like the BSDFs and material output). So the sooner you get an idea of what the nodes actually do instead of going by the colors the sooner you can start really using them…

edit: Take for example the RGB curves node that you mentioned. This node can manipulate single value data, color data, or normal data. In fact it’s the only way to do some of these things. So you see the scheme of things is more complicated than it looks!