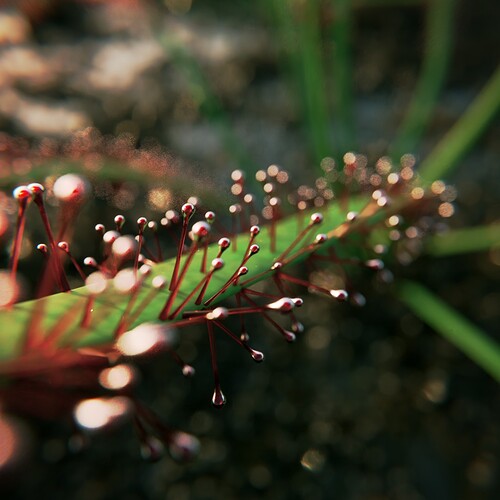 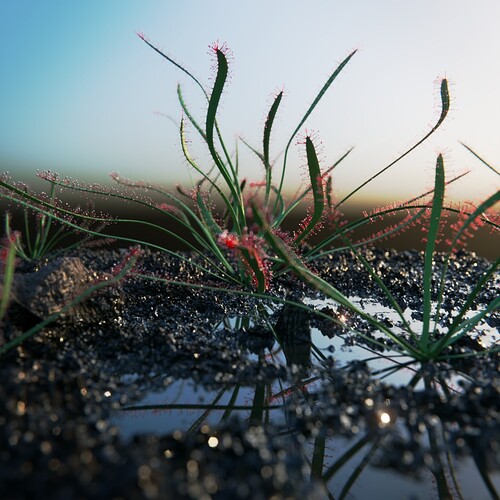 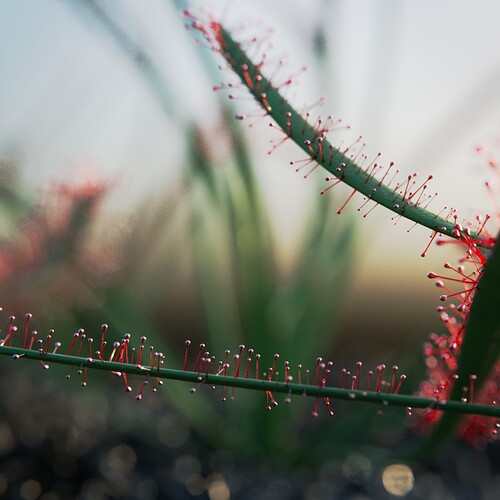 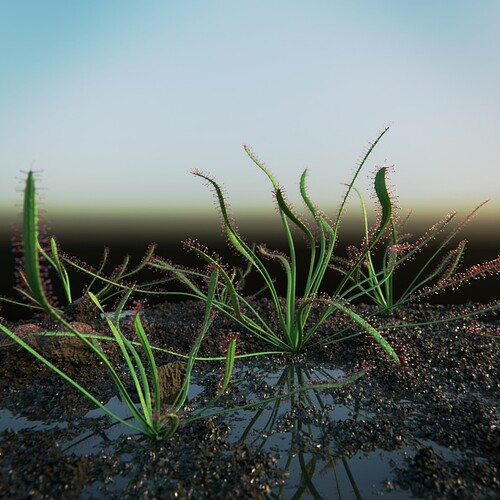 Nodevember22 Prompt 6: Brutal Machinery, Drosera capensis
The Cape sundew. A carnivorous plant which wraps it’s sticky tentacles around it’s prey.
So for flies this is quite some brutal machinery.
Might do an ‘fly-eating’-animation for it sometime later, but for now this still has some room for optimizations.
Mainly due to the fact that there’s a lot of those tentacle. So this might be an excellent candidate for Curve/Point- rendering, or baking everything for bigger scale scenes. 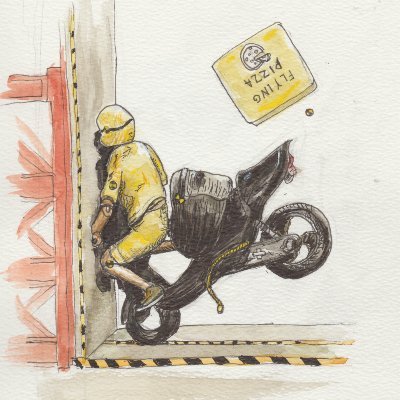 No Wireframe today, due to the missing tentacle-optimization. But some single variation.
Unfortunately everything is rendered without the proper SubSurfaceScattering/translucency-map, which i noticed way to late. 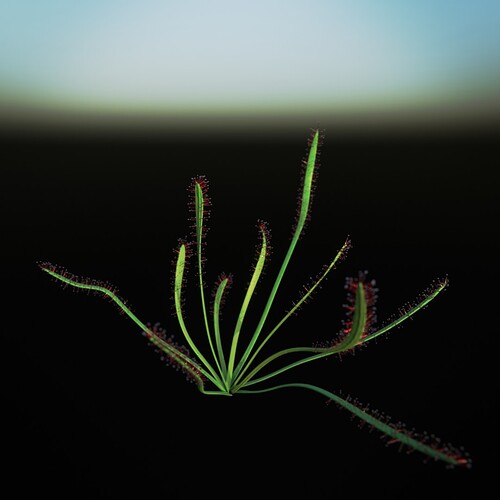 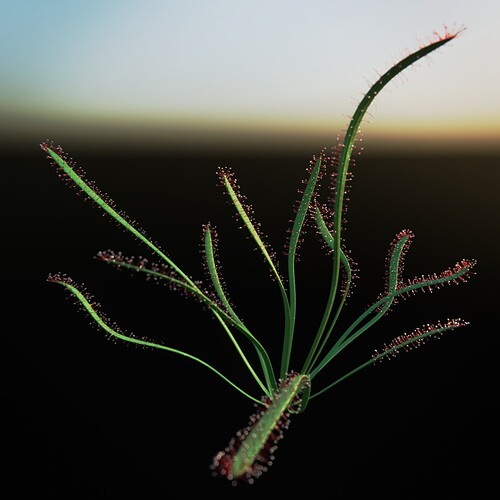 Anther problem i’ve encountered is the tentacle distribution. which isn’t really random at the plant, but spaced out nicely. I’ve tried first with Poisson Disk and a much higher factor for the sides the the top.
which worked kinda ok for the top, but sides were still not dense enough not matter how much i cranked it up.
Might been caused by working on a very small scale with poisson-disk?

So I’ve ended up Instancing them also directly on the points of the Side,
which makes for a better silhouette, but is also not very optimal at all.

Here are the Nodes:

I’m thoroughly enjoying following along with your work this Nodevember, it’s such a fascinating way to approach this and the results are incredible. You’re inspiring me to potentially get good enough with shader nodes that I can do something similar with birds next year (I love birds)! I would say “get good enough with geometry nodes” but I don’t think making birds using just geometry nodes is feasible

Maybe next year you can prove me wrong

Thank you Joseph!
Glad to hear this.

ohh, I am quite a birder too! would be a lovely project.
Yes, please! go for it! I’ve seen some pretty amazing feather-generators made with gn already.
which i think is a quite feasible use-case and might be a good starting point

A whole bird is a bigger challenge ;D
For nodevembers time-limitation though, maybe it’s better to compartmentalize it?
Like feathers for one day, next day the beak…etc

But for me personally, think i’ll stay with plants. Still a lot to learn about it.

You’re picking some really cool plants. Where are you located geographically? I’m seeing a lot of my PNW plant friends in these.

I once found a patch of sundew growing on a floating log in a lake in the coast range of Oregon, they are quite striking in the sunlight.

Thanks! Sundew’s quite a beauty. but rare due to it’s rare habitat.
This particular one is called after the Cape of South Africa.

Used to have one as potted plant years ago, but can’t keep those alive for long. Not even the fact is helping, that I am a qualified gardener ( And as a professional, i just choose my house-plants to need less care thb. ;D sundew doesn’t fits my lifestyle yet)
Usually i prefer real-life specimens i can gather in the garden as reference, like the horsetail. but for nodevember i am also doing some research to fit the prompt, and use image reference.
So it has to be common enough, to provide sufficient reference-material online.

Some Plant- genus like Horsetails or sundew are spread quite a bit around.
I envy you for seeing one in the wild!
The native middle-European sundew is extremely rare, so i went with the Cape sundew. (to finally answer your question)

Looks better than my attempts! I know the focus is the plants but I also think that the wet soil looks great.

I once tried to make Drosera regia (another from SA) but had the same issues with tentacle placement (and this was pre-good geometry nodes). This was as far as I got in an old scene (I had to quickly update the textures and nodes for this as it was done pre Blender 3). This is just the usual instancing on points approach.

I could probably make a much better attempt these days, but honestly I want a break from biological models for a bit! 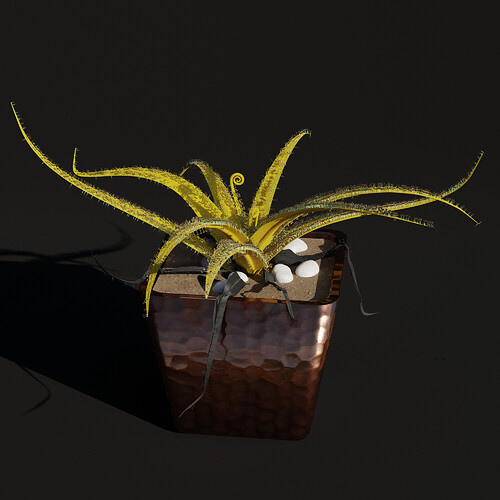 These nature projects do make me think it would be great to have some other distributions of points implemented to geometry nodes however - it’s clear that Poisson disc and “random” don’t really quite capture a lot of how biological structures are arranged.

Used to have one as potted plant years ago, but can’t keep those alive for long.

I’ve been growing carnivorous plants for 20 years now. They are easy if you can get them bright light, distilled water, and crap soil. D.capensis doesn’t even need a dormancy period.

Hey, that’s looking great!
Yeah some alternative way of distributing points would be awesome! there’s probably some tricks i don’t know yet which might help too.

I could probably make a much better attempt these days, but honestly I want a break from biological models for a bit!

I feel you, sometimes a bit variation is great, i had a break from noding plants and created some environments, and it’s refreshing! But atm it’s fun, and generally i like it a lot too.

I’ve been growing carnivorous plants for 20 years now. They are easy if you can get them bright light, distilled water, and crap soil. D.capensis doesn’t even need a dormancy period.

Thanks for encouraging. might get one someday. doesn’t sound that work-intensive and it would be a good study-object

But usually i like my houseplants to survive at least a month without water. So I mostly have succulents.
Have enough plants/work in the garden, so inside it shall be easy.

The Mud is from this very good Tutorial by Erindale , I highly recommand.
Really using this Material a lot, it’s really nice to have around