(Noob) Having trouble rigging my model

This is a relatively simple problem, I think.
Basically, I’ve been using blender for a month or two now, and I’ve improved in a few areas like modelling and using nodes. However, I’m awful at rigging, and it hasn’t worked a single time for me, not even remotely.
I don’t even need a complex rig (with facial expressions and stuff); just the basic limbs and fingers stuff. I’ve made the rig and posed exactly how I need it, I just have no clue as to how to parent it. Could someone please help me?
I guess I’m just too stupid to understand the absurd amount of video tutorials online.

Substitute “relatively inexperienced” for “too stupid” in your statement! Very few people are actually stupid - George W Bush was one I can think of, Tony Blair was another…

To parent a mesh to a rig, Select the mesh, SHIFT select the armature, key CTRL+P and chose “With Automatic weights” that will give you a good start, assuming your rig in good.

BTW Welcome to BA! - often it is good to post images as well as you blend file here, so we can see quickly what you have been up to.

I’m pretty sure I’ve tried precisely that like seven times, but I will again.

Also what’s with the hate? There’s no need to get insulting/political about this. I just legitimately don’t know how to do it. Surely that’s what these forums are, at least in part, for, right?

I’m pretty sure I’ve tried precisely that like seven times, but I will again.

Also what’s with the hate? There’s no need to get insulting/political about this. I just legitimately don’t know how to do it. Surely that’s what these forums are, at least in part, for, right?

No hate implied, sorry if you took it that way - it was just a joke at George W’s expense, I was saying that you should not say you are stupid, clearly you are not, just inexperienced like we all are at times. Please don’t take offence, none was intended.

PS. I will look at your rig and see what is wrong later…

OK, I have just had quick look at your file and note the following: 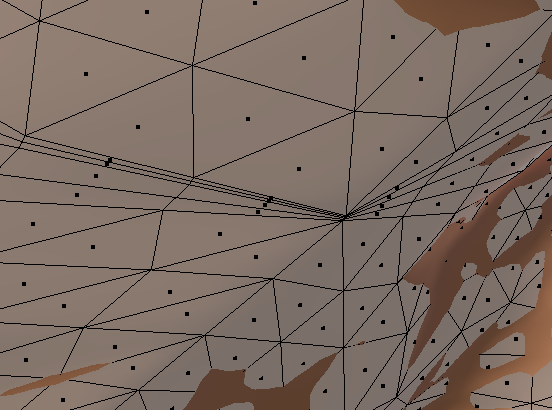 10 ) You need to get your vertex distribution far more even, i.e. don’t have big, then tiny polys - try to keep them more uniform.

But there is a lot of promise in the character if you can correct these faults. You should do ALL edits in Edit Mode, i.e. rotations ,scales, etc. or you should apply the rotations and scales afterwards by selecting the objects on Object Mode (note for the armature) and then key CTRL+A and select “Rotation and Scale” from the resultant popup. It is also a good idea, although not necessary, to have the mesh and the armature with the same origin point - you can move the origin points anywhere you like, it makes for easier animation in they are coincident. But at least you have a good naming convention for the bones.

Fantastic! This shouldn’t take long to fix. /sarcasm
So why do faces with three vertexes not work? that seems a little odd.
Also, could you maybe upload the model with the modified armature? I’d just like to have a poke around it and look at it first hand. Thanks a bunch by the way, you’re awesome!

I haven’t forgotten you - Mrs. C has a jobs list for me…