Hey guys, I have the following problem. I am figuring out normalmaps and I am pleased with the result (2048x2048 looks much better even) but upon saving and reloading, I get the result shown on the right. When checking the object, the normalmap texture is all black, even when again selecting the right normalmap image from the dropdown menu for texture source, it stays that way.

I assume I am forgetting to save a temporary result, but I don’t understand where. Is it because the UV map is overwritten by the normalmap so blender doesn’t know the coordinates?

How do I fix that?
Thank you in advance 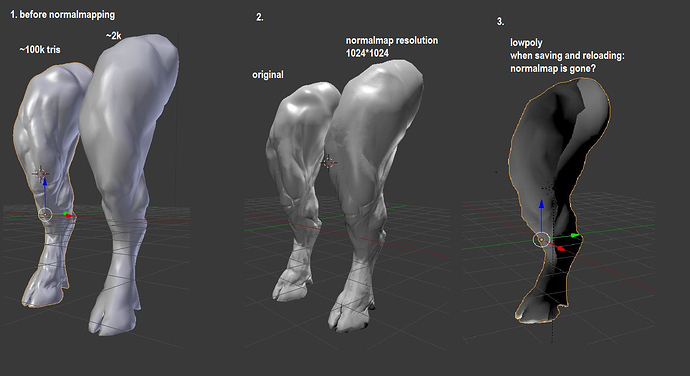 Did you save the normal map texture ? It does not get saved automatically when you save your blend file.

Did you save the normal map texture ? It does not get saved automatically when you save your blend file.

How do I do that? Do I have to save it seperately and reload it manually every time I load the project?

Ah I seem to have gotten it, by pressing image -> pack image as embedded png

You must also use the “Fake User (F)” button to make sure that the use-count of anything that you want to keep never becomes zero.

When Blender builds its in-memory data structures (that is, of the things that can be saved to a file), it maintains a “use count” that indicates how many other things refer to them. Generally, it does not “dispose of” anything during a session. Instead, when saving the file, it saves only the structures having a non-zero use® count.

“Fake User” artificially forces the object to have a use-count that is one greater than it otherwise would have: ergo, the count never becomes zero, and the object will always be saved.

If something “isn’t there when you reload,” that’s undoubtedly the cause.

Ah so essentially that comes into play when I decide to not use the texture on an object but want to keep it for later use, otherwise it would not be saved

How do I do that? Do I have to save it seperately

100% safe way is to check on UV editor menu Image -> Save. Blender does not save images created in UV editor by itself - that’s left on user.
After you have saved image you can Pack it. It’s pretty tough to get rid of image once it’s registered in blender - you have to explicitly Shift-click on X in UV editor to delete image User near it’s name on menu then save and re-open blend file to clear last traces of it.

Again - Save images you worked on BEFORE you close blend file. Do this in UV editor - look on menu there.