I’m working on an animation that will use a non-photorealistic style. This is an image of the seedy motel bathroom where the murder takes place.

The look of the film is inspired by the art of Ben Templesmith, the comic book artist. None of this would be possible without blendernpr.org, which pages I have studied assiduously at work. The colors and brushstrokes are either projected by light, composited, or projected by light and composited. Freestyle is used for the lines.

At this point, I’m not looking for specific feedback; however, I’m interested in reading whatever responses people have for me. I appreciate the help, thanks. Ah one of the npr users. Looks very good, have not tried it myself. Gives a good mood for a shabby bathroom scene. What style are you gonna go for the characters? Same or different? Btw if you are interested I spam a lot on the google+ “3D anime” forum, feel free to join.

love npr compositions! i’ll be interested in you can keep the brush work from “jumping around” frame by frame - i’ve had problems with Freestyle linework jumping around if I use anything other than perfectly straight lines. keep us posted!

Thanks for the feedback! The characters will be realistically proportioned, but rendered with paint strokes and lines. I just saw the animation shorts at SXSW last week and there was a lot of jumpiness in the hand drawn animations. Stop motion is rarely smooth, as well, so I’m not worried too much about that. I’ll keep it to a minimum on the characters by having them rendered with short, neat strokes, along the lines of what you see in the mirror. I’ve considered painting their UVs by hand, also. I’m not there yet, but I will be shortly, because this scene and another short scene will constitute a “trailer” that I can use for fundraising.

Here is an updated render: 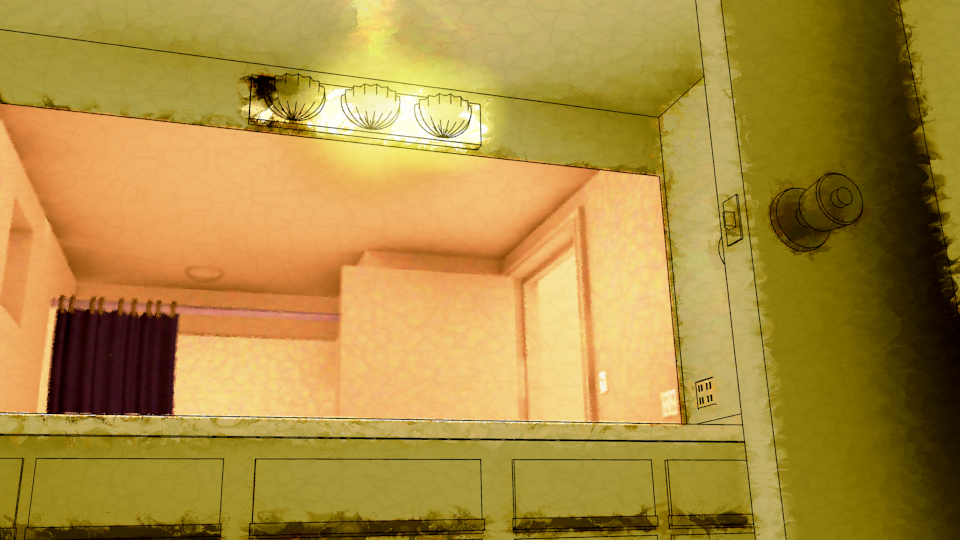 Suffered a minor setback with the computer in the shop, but it is back and better than ever. I think I’m close to finished with the setting for this scene and will be moving on to the next scene that will be in the trailer. 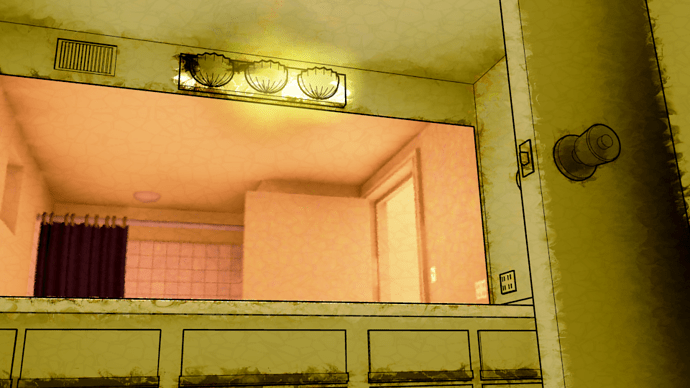 Fascinating approach and I will follow this to see where it’s going. Let me just get this straight. You are actually modeling and painting this entirely in Blender?

Looks creepy cool! that is a very good thing…

Really interesting so far. I look forward to seeing where you go

Thanks, everyone. Yes, everything has been in Blender so far. I’ll be using NiMate to do full-body motion capture, and the alpha 7 of MakeHuman for the character models.

I haven’t had to paint anything, yet. Everything is procedural. I’ve adapted a node setup, intended for a watercolor effect, from blendernpr.org to my own ends–kind of a messy sponge paint look.

As far as I know, I will have to draw lines in the mirror reflection to match the Freestyle render because Freestyle doesn’t appear to do reflections. I’m torn on whether I should. The lack of lines in the reflection helps to indicate that we are looking at a reflected image in a mirror.

I had no idea that site existed. Thank you. Now just a thought. Is there anyway you could paint the scenes in Krita even with animation in mind? What you are attempting here has suddenly become damn interesting.

I started with the tutorial linked from this page: http://blendernpr.org/inking-watercolor-effects-with-blender/

I did away with the transparency and the bottom half of the noodle that shades everything in white and draws lines using the compositor. I used Freestyle for the lines, instead. Also, the tutorial recommends using a different light and noodle setup to “paint” each object. I wanted to shorten render times, so I pre-color corrected objects, using shaders, that I wanted to have different hues–making them bluer than they would appear, so that when the lights paint them in orange they appear their natural color. So, the shower curtain, for instance, has a very saturated dark blue shader. This allowed me to use one noodle and one set of lights for everything, cutting my render times down to about 30% of what they were working out to be with only one additional light and noodle setup.

I also created my own texture for the brush, from a bone texture photo that I found on wikipedia. That creates the messy sponge look.

And that is why I think it would be a challenge to do this in Krita. You could export the UVs and paint on them, but that wouldn’t give you the look of painting outside the lines (at least as far as I understand). You could, of course, paint each frame in Krita.

Also, I’ve added a procedural texture to the lights themselves–which will be animated to create this sense of reality coming apart.