A few hours ago, NVIDIA open-sourced their PhysX SDK 5.1 with Some 662k lines of code out there… 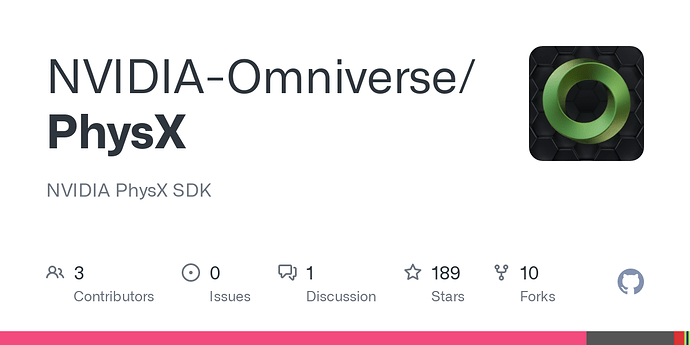 NVIDIA PhysX SDK. Contribute to NVIDIA-Omniverse/PhysX development by creating an account on GitHub.

Wow, that’s actually good news and unexpected from nvidia (they very rarely open source something, tbh i dint recall anything open sourced from them recently).

Is this license compatible with GPL? As far as i understand its almost CC-BY.
They only require “Copyright (c) 2008-2022 NVIDIA Corporation. All rights reserved.”

Looks like a standard MIT licence to me. So yes, it is GPL compatible.

I believe they started open sourcing linux GPU kernel modules under a joint MIT/GPL v2 licence a few months ago as well.

I hope the UPBGE guys (and the Blender devs.) have a path away from Bullet Physics because I can see it going EOL now (at least as a general-purpose engine). By Nvidia’s announcement, that path looks to be them integrating PhysX and helping in its development.

Yes, Nvidia physics is way more performant and stable with more features also.
And production prooven in so many triple A games.
While Unreal and Unity proposing other options than only Physix with Chaos physics or Havoc as a paid option.

Currently CPU compatible… If I got it right, GPU binaries are closed source and they don’t plan to make the GPU features open source . I think that’s kind of a turn off for most developers unfortunately.

Good news, CEB Studios is already starting working on it

That would just be for the baking of the simulation right? I don’t know if I would mind that and then do the render on the GPU.