I was backing up my website yesterday and for whatever reason decided to peruse some of the old stuff I had lying around on my external HD. I came across a rendering titled Oasis that I did years ago, well before I knew anything about texturing. Anyway it inspired me to make a new version of the scene and render it with Cycles.

This new Oasis scene was rendered in Cycles at just over 1400 passes at 14hrs, it’s still a bit grainy in some of the darker areas, but overall I’m pretty happy with the result. Added in a bit of fog, lens flare, glow around the moon, color balancing and gamma correction with Blender’s compositor. 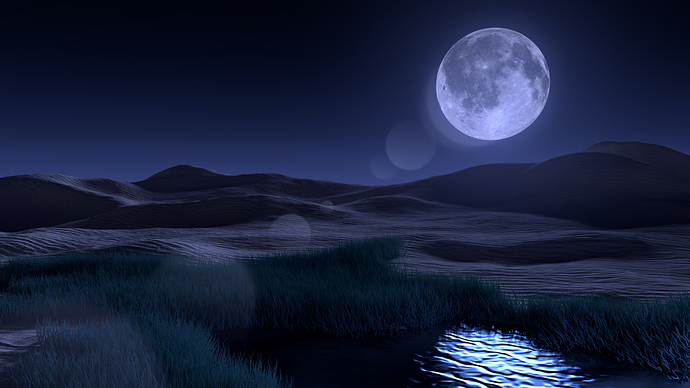 Oh yeah, here’s the original from which I gained inspiration:

P.S. I don’t think the glow and lens flare was added with Blender’s compositor in this version of Oasis, I probably used GIMP for that or something because I doubt I knew how to use the compositor when I made this.