I’m working on building an ABHA Coil, but I’m having trouble trying to get my object to go along a path. 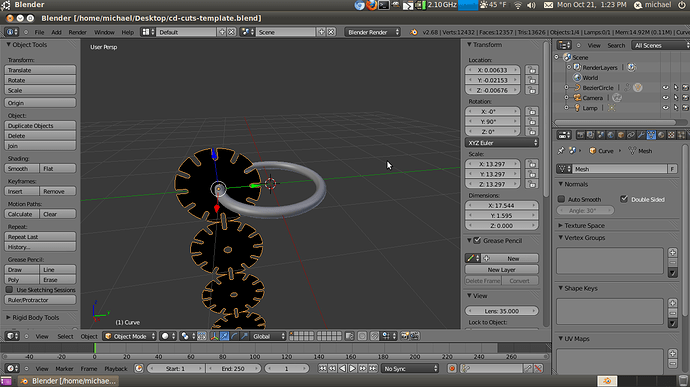 The frame was originally made in Gimp, then converted to a svg modifed a bit in Inkscape and then imported into Blender, converted to a mesh, and then I set the mesh parented to a circle curve, and added an array modifier, but I see no option(s) to have the array go along the parented path. 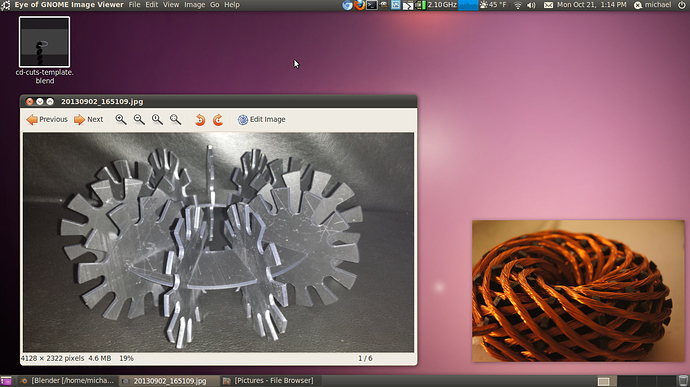 This is my goal creation in Blender at this point.

idk if it’ll help, but this is my current project file.
cd-cuts-template.blend (518 KB)

Any help is greatly appreciated.

I’ve included a file where on the first scene layer it uses the original array with object offset, and on the second layer array is removed and it uses dupliframes instead.

To make the array with the offset work, you first need to apply rotation and scale for your gear object because array modifier arrays the mesh and not the object. Ctrl+A -> rotation & scale in object mode.
The path object already has its origin point at the center so that is a good place for the new gear object origin and for the offset object. Select the path, shift+S -> cursor to selected, select the gear and ctrl+alt+shift+C -> origin to 3D cursor, and then shift+A -> empty. Uncheck relative offset from the gear array modifier and enable object offset, point it to use the Empty. Now when you rotate the empty, an array of gears goes around the empty. Since it’s in the same place as the path, it appears to go around it too.

Heh… Nothing quite different in this - JA12 beat me. To get your svg shape (which could be modeled in blender too btw) clean use limited dissolve on selected faces.
And you can write 360/11 in Z rotation field on N-panel… http://www.pasteall.org/blend/24753

Thanks you two, you’ve been a great help.