Object became invisible after some manipulation

Recently I’ve tried to create a subway scene with hanging wires along the tunnel. I’ve modeled the wires and then something happened (possibly, I’ve pressed some key combination) that now I’m unable to see the wires. I didn’t notice it right away and then it was too late to undo.

When I use Edit mode on the object, I can see the amount of vertices, I can select them with “A” and move them. The object is not hidden. The layer is visible.
The object is invisible during the rendering too.
Blender version is 2.73.

The first screenshot shows the scene with invisible object (Cylinder) selected and in Edit mode.
The second - in Object mode.
All other geometry is hidden as it’s irrelevant to the problem. 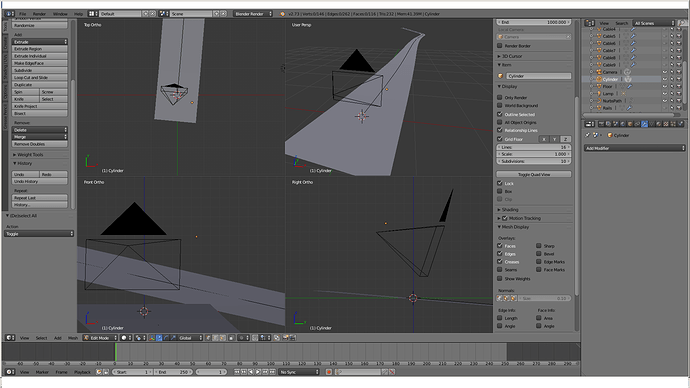 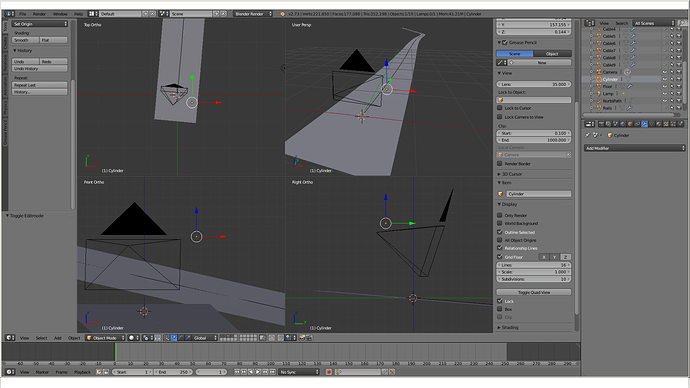 Hey guys, does anybody know what should I do? Come on, show me the community spirit

Did you move something to another layer in object mode? Other than that I’d say to alt-H to unhide stuff, but you already said it’s not that.

Thanks for the reply Paul.
I did move something to another layers. But as you can see on my screenshots, all layers are visible (they are dark gray in layer selector).
And according to icons in objects list, the cylinder should be visible and renderable.

When something like this happens, I reload the file and restart from when I last saved.

Since you’re apparently new to Blender and you didn’t provide your blend file to look at, it’s hard to say what might have happened.

Go into edit mode. Select all verts and press the period key on the numpad. This should center the view on the mesh. You may have accidentally moved the object far outside the scope of the scene.

Go into edit mode. Select all verts and press the period key on the numpad. This should center the view on the mesh. You may have accidentally moved the object far outside the scope of the scene.

Sorry, didn’t have time to respond. That was the answer to the problem! Thank you.