Object open itself and no normal map when using armature. Humanoid model

I have two problem the object itself and the normal map when using armature (When the bone is moved). This is a humanoid character and it’s Blender 2.79. And I use the automatic weight bone.

1.- First problem, I will show two images, it’s the shoulder.

When I don’t move the bone it’s all normal but when I move the bone(Depending all much I move, the more I move, it get worser): 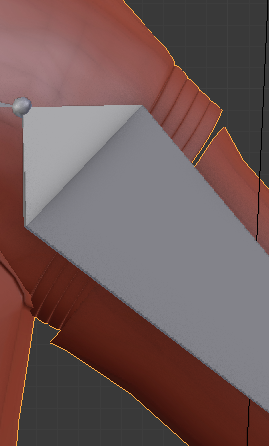 As you can see, the object itself separate.

As I say, this is a humanoid character (First time doing), and I did it by part, I mean the hand is one object, the head is another object, the body, etc. So, what you see above, was two object separated, but now it’s united as one.

When the model is finally finished I used “two ways” to unite them, the first is by using ctrl + J and the other is using a addon sculpt that has union,separation,difference like the modifier (I think they are the same but in an addon), but unfortunately, both way give me same result.

2.- The second problem, I don’t know why it’s happening since I have made another model with armature and it didn’t gave me problem about the normal map of the model.

But this time the normal map of this model slowly disappear when I move the bone (Just like above, it depends how much I move, if I move a lot, it get worser, I mean fading away).

I made this character in T pose.

I need someone to help me get out of this, I already have almost 3 months making this model and no result to give.

Thank for the reply, it’s Blender 2.79. My computer doesn’t have the opengl requirement neccesary.
I will edit the post.

Ok then I could help you. You can upload your blend to let us see what is wrong with your rig and normal maps. I had similar problem with wrong deformed (detached) mesh even if weights were normalized to be deformed by 1 bone it was deformed with some offset. I don’t remember how I did resolved this but I think I will recall if will see problem. But normal map issue you described sounds new to me. What you can try is to append your character in fresh new blend file and see if problem still exists.

Sorry for such a long time reply, I was uploading two files of 130 mb (the model) to Google Drive and well, upload internet is only 100kbs (I’m sure like any people here…).

This is the blend file where all parts of the model are separated:


This is the blend file where some parts are united, the right side has been moved slightly, but you still can use the left side to see (It’s the shoulder):


The normal map is in the “Zhurong Arm” material, it’s just a simple material, the Normal Map Image and a Node group.

I think the problem is the weight, since the two parts (When united) has different weight (One is yellow and the other is red), but the problem is I don’t know how to apply a new weight after applying the automatic weight.

Sorry for delay. So i looked at your blend. Arm need a little weight paint tweaking. Just enter weight paint mode choose add brush, press auto-normalize checkbox in brush options, switch to wireframe mode, select arm bone and accurately weight paint your arm at ‘seam’. You should make all vertices to have same weights in that place. Then it’s ok. Also you can use blur brush to smooth weights a bit.

As for normal map issue i have no problem with it. Don’t know what it may be.

Thank for the answer.

I will try it within few days to see.

As for the normal map, maybe it’s the problem of the light, I might have to change the position of the HDRI.