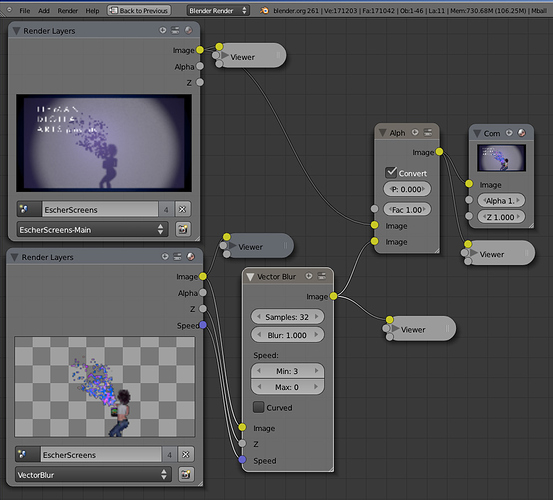 This is the Compositor noodle, very basic V-Blur setup. Note the presence of the particle MBalls in the Render Layer node on the bottom. 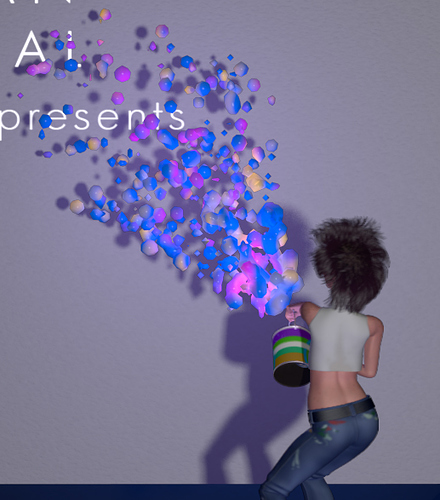 This is the composite image. The character is slightly V-Blurred, the hair much more so, but the particles are sharp as a tack though they are moving quite fast – the entire splash takes less than 10 frames to hit the wall.

Did you bake the particles?

the particles show no sign at all of responding to the Vector Blur. Are they not included in the Vector pass from the Render layer node? That seems like a huge omission if so. Or maybe a bug?

I have not looked into this matter, but I’m under the impression, at least in this case, that if - you - ,a professional, can’t resolve this issue then neither can I.

But what I just wanted to comment on was that I remember a couple weeks back you posted you were experiencing some weird behavior with Mballs as particle objects(I think). Well I fiddled around, and found that when I set an Mball that is being used as a particle into Edit mode that there was some erratic behavior. For example the Mballs would unexpectedly spawn from the actual Mball particle and spin. Maybe I am doing something wrong…

I, personally, am under the impression that the Metaball code is just not being actively managed. Either the devs have their hands full with more important issues or they just aren’t that interested in Mballs. So what I am saying is that I wouldn’t doubt that they either simply don’t have Vector Blur support or it’s a bug.

But, who knows, maybe a dev or someone could come along and say otherwise. I am curious to find out.

I get 'em spawning just from doing Scene Layer changes! Makes a mess of the UI but doesn’t seem to affect the rendering at all. Yeah, Blender seems to be rife with orphaned (and sometimes a bit crippled) features and code, it’s always cool getting new toys but if the old ones are busted and never get fixed, it brings down the entire rating imo, like one voice in a choir that sings way too off key.

I often post queries in the hopes someone else has run into the issue and can point me at some confirming documentation or sumpthin.’ At the very least it can help others who might meet up with the problem. For example, I found an OK workaround – using the Compositor I can apply a dab of Directional Blur to the particles alone that does a decent job of faking motion blur. The problem isn’t [SOLVED] but at least it’s been [DODGED] 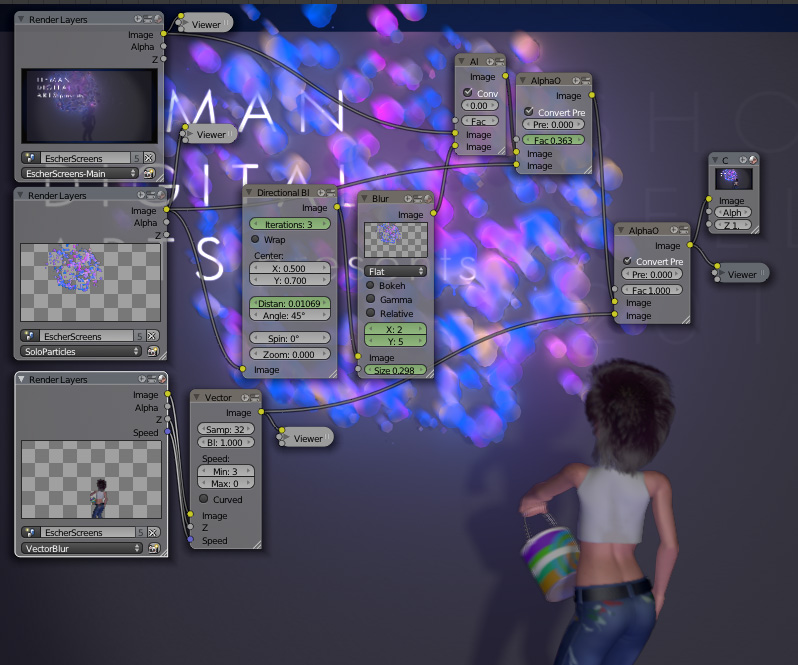