This link send you to Pro users page… you can download it, but you can’t use it. I once make such mistake 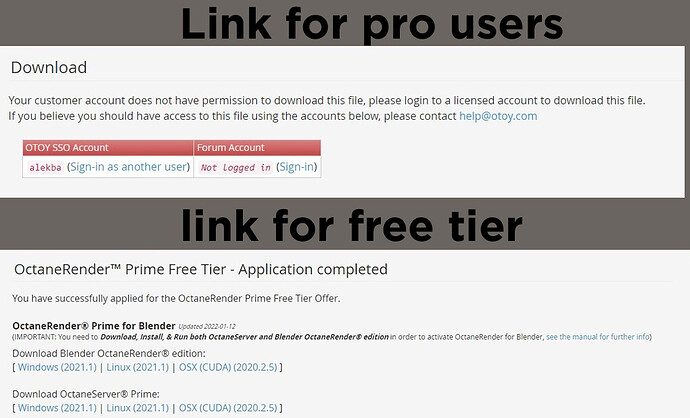 What do you mean? It lets you download Blender_Octane_Edition_2021.1.4_26.0_beta right? What happens after you install both the program and octane server?

If you install payed version and try to render you get error message. First picture show how it look when you try to download payed version.
Second picture show how look download page for free tier… Octane which work.
Well, maybe I’m wrong, try it and show result. Maybe I do something wrong.
Octane check you license status, if your account are limited to free tier, he don’t work.

You just need to scroll further down on the link.

Side note, anyone find Octane initializing particle hair system much slower than Cycles?

You need an account at Otoy and then go here and scroll down to the second post. There are links for prime version.

Ok thanks a lot
We are not proposing octane shaders for our starter library, waiting for official 3.0 support to support the asset browser properly

I must say, currently on the go with a laptop & 4gb of VRAM and octane was very hard to use

Couldn’t load more than a few vegetation assets w/o going out of memory. Any tips to clean up VRAM while using blender?

For a laptop it’s going to be difficult, also 4gb is about as low as you can go with Octane. Make sure that you don’t have any virtual desktops in use. I would shutdown any other programs that are running as well although it will probably not make much difference. Turn on out of core memory, probably not help with instances, but it will help with textures and geometry. Having more system memory will help with this as you will be using it instead of vram (see shutting down other programs).

This would be on the more extreme side, but you could install Linux on your laptop, if you are not already running it. Linux’s footprint is much smaller than Windows, uses resources more efficiently, and can be a bit faster in some cases. This probably will not affect vram usage much as it would be the same with Octane for either OS.

There are some other things you can do within Octane like choosing a render kernel that has a smaller footprint on the GPU (not sure which one would be the best, my guess would be Direct Light). Some settings in Octane will use less vram than others as well, but that is getting into the weeds and I’m not sure how much vram it would save you. It would depend on the scene, but basically any setting that sacrifices vram for speed would be the ones I would concentrate on.

Didn’t knew it was possible thanks !

This would be on the more extreme side, but you could install Linux on your laptop, if you are not already running it.

My main problem is chrome browser, it’s using bit of GPU memory too I believe

Thanks for helping out !

We have made many improvements since XB0 and we’re happy to bring you XB1 of 2022.1.

We’re also releasing XB1 for MacOS, but as mentioned previously, please be aware that there are some known render regressions we are working on. Also, at the moment it is not possible to use CUDA render nodes with MacOS standalone.

The MacOS builds below will only work correctly on MacOS12 and Apple GPUs.

As with all experimental builds, we advise to not use this release for production purposes. We are trying to, but we can’t guarantee that scenes saved with this version will be compatible in future releases.

OctaneRender™ for Blender plugin. Windows, and Linux versions. The download links, provided on this page, are for Enterprise License Holders.

When will the free tier version will be updated to match this?

It appears it has been.
Haven’t downloaded it yet to check. 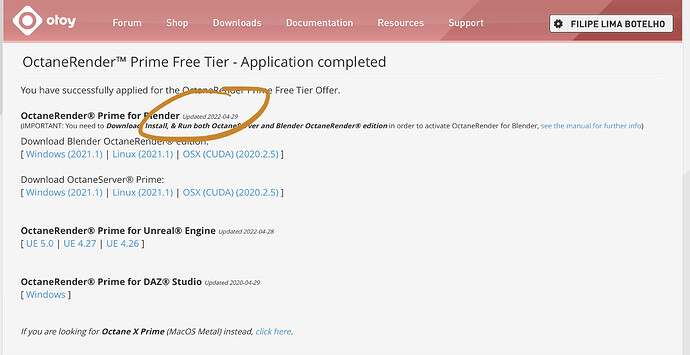 Weirdly the MacOS Metal version is still stuck at Blender 2.83. I wonder if they will update it at all?

That would require OctaneX and while its already there for C4D, there are still many issues.I guess the plugin developer wait for support before adding it. Kind of Otoys problem, to many external developers. Redshift is progressing slower, but in higher level and the Blender plugin is one of the few external render, that are true add-ons.

So is Octane finally an addon or is it still a separate build?

Rumors are we won’t see an addon version until Octane 2022 version.

Separate build is not big issue for me. After all, always can save scene in ‘normal’ Blender, and open in Octane Blender. I meantime can take beer or two

I wish that there is some even most simplified texture preview in viewport for texture. When import image texture and adjust scaling, projection, it’s inconvenient to have GPU rendering all time. But I guess that this is not possible, Octane for C4D also don’t have such possibility, for example.
btw. this can be interesting comparison, great artist which render same scene in C4D with Octane and Redshift ( hardcoding scene ).
ZAKI ’ on Behance
So chose your poison

Well, it’s not their fault. The Blender SDK is said to be in a bad shape and many company and add on developer complain of lack of support for C++ Api and more control for add-ons to manipulate the host application.
So far, its for them twice the work. And more then this plugin render work on how shader nodes work in other application, just not like it is in Blender.
On order to bring things together both parties need to move. And I think the developers of Octane have a huge knowledge of how to add their stuff. Its just Blender Devs seem to take the whole thing not as important.
For example, if I use Octane in Modo, everything is supported without even adding a single thing to Octane. So all textures and shaders work. Special functions in shader can be obtained by adding an overwrite, that automatically translate the shader to an Octane shader. So I still can use the default render and still have the Octane override. Both live in the same world.
Of course going deeper you need to know much more and test things. Like sport likes being different, displacement and noises work different etc. But if I take a normal Modo scene and just let Octane render, I get almost the expected result, without changing anything. Blender is lightyears away from that.
Things might get better when Blender supports new shader formats that allow unified shader definition. Maybe that can make even Blender shader work in other renders… maybe, who knows.