After the unexpectedly big discussion on mice, I’m looking to get a new desk chair.

I’ve had my current one for a good 5 years or so, and it’s by far the longest surviving chair I’ve owned, but it’s starting to show it’s age, and is quite tatty, and not quite as comfortable as it used to be. It’s a DX Racer (not sure which model)

I know that they get stick, but honestly, it’s served me well, but it’s time is almost up I fear.

I’ve tried many of the cheaper bog standard office chairs, but they have never lasted more than a year or two before something goes wrong with them. My last “cheap” office chair completely snapped…somehow. (I’m not that fat…honest!)

I’m kinda over the whole “leather” chairs too, and I think I want something that’s fabric or something instead, as the leatherette always wears away, splits, and flakes, and it’s kinda nasty to look at after a while.

Im in UK land, so anything European access is going to be better. I hear good things about the Noble chairs, which are of a similar vein to DX Racer, but seem to be better quality. They’re a little on the expensive side though.

I’ve also heard ok things about the IKEA chairs, like the Markus, but I have no idea. They’re reasonably priced.

Just please bare in mind, I’m not minted, and don’t want to be spending £800 on a chair, so although I’m sure you mean well, please don’t mention herman miller lol…

Both of these chairs are stupid expensive but with good reason. Once properly adjusted to your body, you’ll be hard pressed to find anything better. In larger cities there are usually office surplus stores that buy used office equipment in bulk and both these models usually show up for $150-250. Take a look at your local used listings. I went to one of these to try out both the chairs and found the Aeron was just not right for me, but the Leap felt right at home. Ended up getting a 12 year old Leap on craigslist for $200 that seemed to be in great condition. 3 years later and it’s still holding up just as perfect as before, with many 12+ hour days. For reference, I would always spend $100-150 on new office chairs that would fall apart within a year or two.

I can not recommend you a specific one but I would not cheap out on a chair. It is something you use 8 hours or so a day and your back will thank you later.

I work from home full time. I have been using this for the past few months and quite enjoy it. It rather forces you to sit up straight. I don’t have a six pack yet, but that’s hardly the stools fault. 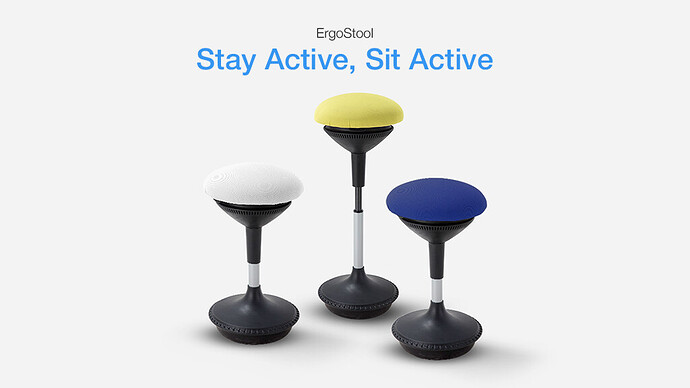 Say goodbye to being sedentary at work with ErgoStool. This office stool will help you stay active in the office, help better circulation, and strengthen your core.

I think you need to decide a few things first. Gaming chairs are almost universally terrible to merely OK for a huge mark up. Performance wise you can get something much cheaper of the same “quality”. A chair like an Aeron, etc is great for ergonomics and very high quality, but a chair that is very ergonomic will discourage bad habits which can mean it isn’t as comfortable as a chair you are used to. If you don’t currently have any bad habits, then that is fine. If you have bad habits that aren’t giving you trouble you wont enjoy something very ergonomic but it will be good for you. If you are looking for comfort, primarily, then find something in a store that is comfortable and start reading reviews. I like amazon and sites like that where I can read reviews from people that have had the chair for a while and see if they had issues down the line.

We have herman millers at my office and while it is a “good” chair, I am not a fan. Not very comfortable. Not uncomfortable, just not relaxing to sit in to my mind. The chairs we had in office years ago I liked so much I bought one for home. It was a couple hundred dollars USD and still looks like new 6 or 7 years later. Can’t remember the brand but I’d buy another in a heartbeat if it had an issue.

I built my own chair. Made it from 2x4 lumber. It has a hard seat, but is strong.