Hi folks, I’ve been working on a TMNT fan film for about 2 years and everything is done with Blender Internal Render.
Here’s a look at my film edit blend, as you can see the film is about 6 mins long so far. 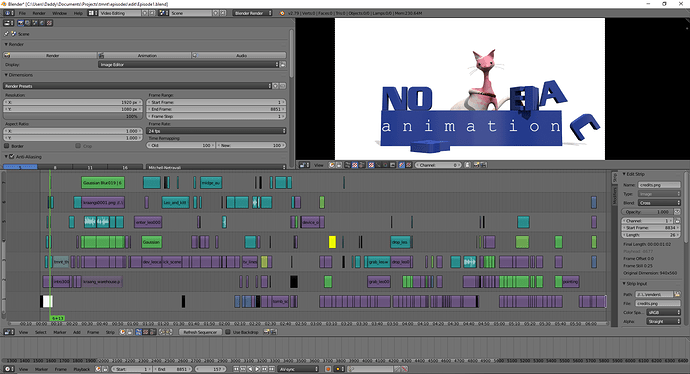 So my question is, am I going to have to stick with 2.7 until I finish this project (got about 20 shots left to do) or if I switch to 2.8 (when it’s officially released) would I have a huge task of setting up everything for Cycles. OR is EEVEE compatible with Internal Render scenes?

Maybe you can try out the daily builds of 2.8 to check it out yourself.
But make sure to save it as these are not stable and tend to crash.

I wouldn’t do a major version change in the middle of a project like that with any software. Even if it claimed there wouldn’t be compatibility issues. Given the huge number of things that change in project structure for 2.8 (materials if you were using BI, groups/layers, linking workflow, etc), I personally wouldn’t risk switching mid-project.

tl:dr: I’ve seen simpler 3D projects than this get derailed by smaller software updates than 2.8

yeah… updates even can cause new bugs. I would not shy away from starting to work in parallel on 2.8 though. There is no reason to fear moving forward. If it was a project for a client with a deadline I would avoid it like the plague. But for a personal project I would say explore 2.8 separately and try porting a few things over and see how things go. The pay off of new features might be worth it.

yeah… updates even can cause new bugs. I would not shy away from starting to work in parallel on 2.8 though. There is no reason to fear moving forward

That’s some great bits of advice there guys, thanks so much.

I never really got into Cycles because I always had older equipment but now I have a really fast machine and i don’t want to get stuck in the past again.

once you finish the project, eevee will likely be much more complete. right now its not worth messing with.

when the beta is released (at least) you can try and port your project. maybe do a 2.8 version to show off the new release.

make sure to keep a full backup of the original.

Don’t even think about it. Go to the end with the release you’re most comfortable in. If everything works, there’s no reason to upgrade, unless there’s something you really need in 2.8.

Thanks for the reassurance kabu.

But there is no loss really. If you are working on a personal fan project, likely a large motivation is the process of exploration and growing your skills. In a “professional” environment where you have to deliver on a deadline - freelance or otherwise - then you’d be a moron to switch.

But by contrast, here you will be doing nothing more than exploring 2.8. In fact I would highly recommend doing that as soon as possible. Download the new versions as major things are finished. Don’t use it for your project. But don’t be afraid to import assets and play around, get a feel for it. The sooner the better so that you can be tracking with the massive changes coming.

You might even find that in the long run with Eee Vee you might save massive amounts of render time and have some much better looking renders. And then some of it done in cycles. Or also using Eee Vee as look development with shaders before rendering.

The pipeline (proposed) for 2.8 is far more advanced and should boost your productivity.

I would look at it in the context of that, without committing fully first.

I think part of my problem is that I’m in a comfort zone right now, I know how to achieve (mostly) the things I want for my projects and the thought of re-learning Blender scares me a bit.

Well sure, I suppose if that is the case, comfort zone is a factor. Can’t argue with that.

For me… this is hell time right now because I am so busy. But also like you I am in the middle of a project and it just so happens we have been focused on asset creating mostly. But I am about to embark on the animatic and I want that to smoothly transition over iteration to the animation for the final rendering. And I had the same thought as you. Thankfully for me I can put a certain number of critical things off for a bit.

But maybe if your head is so into what you are doing don’t sweat it.

But I think it is going to come down to deciding at some point to dive in again. But maybe most of that back off has to do with your current project, which is understandable.

I was just saying, you know… take a few bites off here and there.

You forgot to say what is your motivation to switch your project to 2.8? Does 2.8 offer you some features that will make your work easier / faster / better? If it is only about the coolness of using the newest, I would forget about it and continue with what is working for you. The results is what counts, not which tools do you use.
Personally I am sticking with 2.7 for next few years, because even there are many improvements in 2.8, it will only make my specific work unnecessarily complicated.

Not sure about OP, but my motivation would be that people are now encouraged to learn 2.8, and legacy Blender will become obsolete. So anyone making plugins are forced to transition to 2.8, otherwise their product might be considered legacy…

Your motivation is that people…

I think it is not important whether 2.7 will be considered legacy or obsolete, the priority should always be to stick with the tool that works for you and your work. Anyway, switching to 2.8 won’t be difficult if you master 2.7, just switch keymap to 2.7 and you are ready to go. And Eevee is almost the same as Cycles to setup…
But if 2.8 doesn’t bring you any advantage at the moment, why to switch? Of course if you are a beginner and you don’t have any specific project to make, then it is better to start with 2.8 right away.