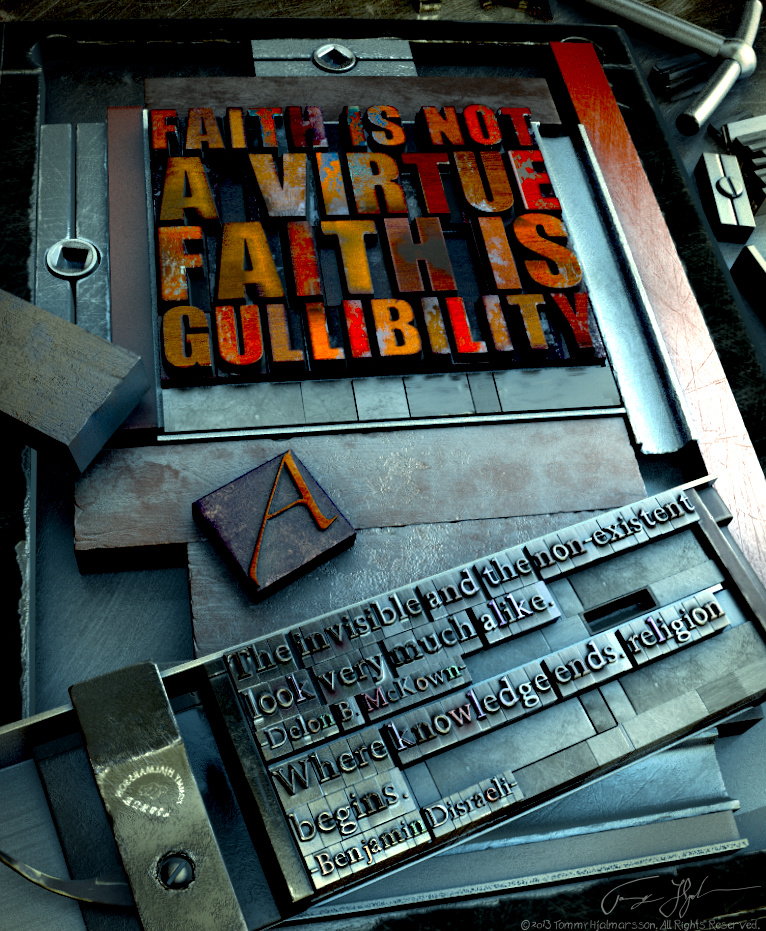 That looks very realistic. Beside the fact that the type face in lettercases is mirror-inverted.

I tried non mirrored first, but I couldn’t read it. I made this scene because I wanted to do type faces to use, but it was so boring to do Aa Bb Cc Dd Ee…
So the scene was a help to go through it all, with a goal before my eyes.

Nice render terrible quotes and ideas. Religion I s knowledge of something higher than yourself.

powerful image,i like the cinematic vibrant colors.Dynamic composition,a persisting sense of movement is there.after googling i got to know abt Delos Banning McKown!

Wonderful rendering, excellent quotes. 5 stars! I just laughed a bit when the comment of Sandstorm made me realize that the letters should be inverted. Is this to print crypto-satanic messages?

It’s definitively material for the gallery… but I guess it won’t happen. Bigots always deny the right to atheists to speak as loud as they do.

Five stars from me. Religion does need to be strongly spoken against. It’s about time we woke up to the delusion of faith.
Anyway, apologies, wrong forum to be discussing that. About the work - great textures, lighting and I love the pallete.

Being called a bigot for Jesus is my pleasure. I am sorry, but faith is not gullibility faith is belief in something. What do you believe in if you are an atheist yourself. If you have no higher being then how do you base your morals? How can you call Christians bigots? And I am fine with atheists speaking it’s just the fact that everyone should know that they are wrong that I am concerned with.

People are only delusional if they give up in the God they are should be faithful to. And personally I bring Jesus into everything I discuss, how could you not.

@PhoenixSmith:
“If you have no higher being then how do you base your morals?”

So those are you morals? Kinda sad don’t you think? I mean I have an all holy father and a book of his words and you have some metallic text. And I agree that woman should be treated fairly, humans have certain rights, and that democracy is great. But I do not agree with that second one at all. It is actually ruled against in holy books. So obviously they are not words from holy books. But thanks for the sub title anyways. And why can’t we all just slaughter each other if all we are are advanced chimps? You have no ground to stand on. Your morals are not based on anything. You are like some dust in the wind pushed about by the whims of this world. I however have my “Holy-Book” to lay down proper guidelines.

I’m against slavery and your book is not.

What proof of that do you have? Because slave and bond servant are two different things. The bible is not for slavery!

In the bible slavery was not just against Africans and it was completely different than what went on in america. Slavery then was not the same thing at all. And how can you say that slavery is wrong? Just because that’s you or your friend opinion? I am completely against slavery, but the bible says to treat others as you would want to be treated I do not want to be a slave. Your poster didn’t say anything about slavery…

However, you may purchase male or female slaves from among the foreigners who live among you. You may also purchase the children of such resident foreigners, including those who have been born in your land. You may treat them as your property, passing them on to your children as a permanent inheritance. You may treat your slaves like this, but the people of Israel, your relatives, must never be treated this way. (Leviticus 25:44-46 NLT)

If you buy a Hebrew slave, he is to serve for only six years. Set him free in the seventh year, and he will owe you nothing for his freedom. If he was single when he became your slave and then married afterward, only he will go free in the seventh year. But if he was married before he became a slave, then his wife will be freed with him. If his master gave him a wife while he was a slave, and they had sons or daughters, then the man will be free in the seventh year, but his wife and children will still belong to his master. But the slave may plainly declare, ‘I love my master, my wife, and my children. I would rather not go free.’ If he does this, his master must present him before God. Then his master must take him to the door and publicly pierce his ear with an awl. After that, the slave will belong to his master forever. (Exodus 21:2-6 NLT)

When a man sells his daughter as a slave, she will not be freed at the end of six years as the men are. If she does not please the man who bought her, he may allow her to be bought back again. But he is not allowed to sell her to foreigners, since he is the one who broke the contract with her. And if the slave girl’s owner arranges for her to marry his son, he may no longer treat her as a slave girl, but he must treat her as his daughter. If he himself marries her and then takes another wife, he may not reduce her food or clothing or fail to sleep with her as his wife. If he fails in any of these three ways, she may leave as a free woman without making any payment. (Exodus 21:7-11 NLT)

Christians who are slaves should give their masters full respect so that the name of God and his teaching will not be shamed. If your master is a Christian, that is no excuse for being disrespectful. You should work all the harder because you are helping another believer by your efforts. Teach these truths, Timothy, and encourage everyone to obey them. (1 Timothy 6:1-2 NLT)

When a man strikes his male or female slave with a rod so hard that the slave dies under his hand, he shall be punished. If, however, the slave survives for a day or two, he is not to be punished, since the slave is his own property. (Exodus 21:20-21 NAB)

Again slavery was different then than it was recently. Slaves usually were POWs or in debt or some other problem. And they were set free after six years, but some slaves would stay with their masters. What African american slave would do that if they were set free.

The Bible moral is that you can own a person as propety, and hit him so hard so he dies after two/three days.
And Jesus agree.

I completely disagree. Firstly Jesus did abolish some laws such as stoning people to death and sacrificing animals. We don’t run around killing neighboring people groups either so the old testament is not the same in all places as the new. And let me ask you this, do you believe in abortion?

Jesus said:
For God said, ‘Honor your father and mother,’ and ‘He who speaks evil of father or mother, let him be put to death’" (Matthew 15:4)