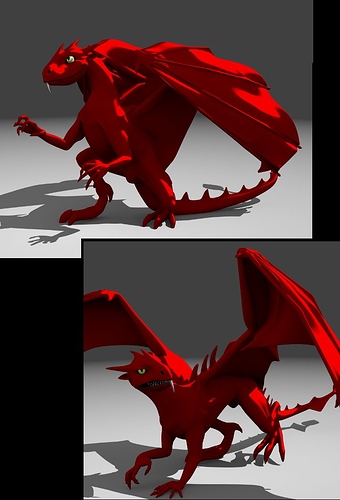 In reference to Toothless from “How to Train Your Dragon”, I called him “Onetooth”.

The rig is mostly complete, but needs some fixes and minor enhancements.
Largest issue is, that I rigged the neck, spine and tail as simple as possible, using single segmented B-Bones for the bendy areas, which works well, but unfortunately distorts the spikes on his back, which were meant to be rigid … probably meaning that I have to switch to a more complex spine rig pattern (which I’d hate).

UVs and textures are TBD, too - the character mesh still uses a mirror modifier to allow quick and painless topology rework where needed. I’ll first make a couple of animations, before I switch over to texturing work.

Helmut, very nice work, I like the dragon although I would like to see some dragon scales texture on him. The animation is good, still could use some smoothing or exageration since the dragon is somewhat cartoony, as well as maybe a bit better deformations. Perhaps adding cloth sim to your wing membrane could also add a lot to this animation

I like the set where the animation takes place

All in all, very good work

Thx for your C&C, Jeannot!

I just did not yet do any UV related stuff - wanted to see the deformation test (this animation) first, in case I had to rework topology.
Did you spot any regions, where deformation is particularly bad?

Btw, the wing membranes actually have cloth sim … but obviously it’s too stiff.

Certainly a Onetooth. The model is great, and I’m not sure how on earth you rigged those wings so realistically! Looking great. If I were to critique I would say that he should have more bulk and brawn around his waist area, and he shouldn’t be so bright red. But it’s coming along nicely.