Now attempting to rework it with Ubuntu, Blender 2.4 and Yafray 0.0.8 and things have taken a turn for the worst.

On the font based rendering, (second link on that page) the form submits the 3 letters to php which creates an image. blender fires up and loads the scene, then the image that was created and applies it to the ring as a nor map.
Previously I was getting a nice clean “engraved” look but since altering the server and the version of blender & yafray it is really chewing the hell out of the bump map.

No setting have changed in the file. I am suspecting that it might be the version of GD that is compiled with Ubuntu’s server setup. Any thoughts as to where this is going wrong?

I have attached a comparison between both version. (Watermark on the first image is the old company where I worked on this) Note that even the watermark looks rough, this seems to point to GD’s imagecreatefrom* as the problem. 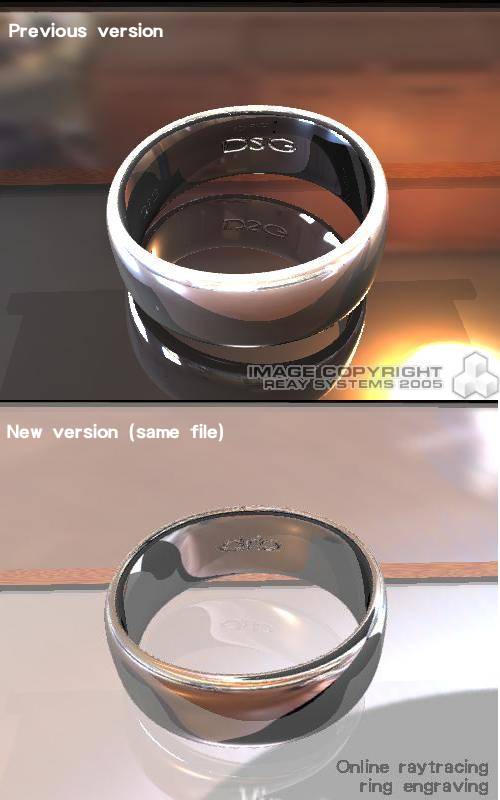 I don’t have any idea what your problem might be, unfortunately… you might be better off asking in php or gd forums or something… but may I just say that those are very nice images and I think what you’re trying to do is a very cool idea. Best of luck to you.

The waters are muddied a little by me changing so many aspects of it at one time so it is hard to nail down where the big problem is occuring.

The end result I am aiming for is to create a front end in flash for a drumkit, you select drum sizes by scaling a top down view (See any premiere catalog for an example) and then picka finish.

Flash send the data to php which then feeds it into blender.
Blender and yafray redirect the rendering to a local network attached to the server and return the render to the php script.

Php then reloads the image back into the flash front end.

My guess is that with network rendering you can cut the render times dramtically to give an almost realtime photo real representation of the kit you are selecting.

Obviously the current setup is pretty basic. (spheres and cubes %| ) but there are some useful applications that this could be applied to. Well…more useful than me engraving ASS on a ring

I’ll go fiddle and see if I can get it working properly.