I thought with blender using only opengl this could interest some of you. mind you need a dx11 type graphics card to be able to use opengl 4.

opengl 4.0 has really stepped it up with the same feature set as dx11 in particular, compute shaders and tessellation.

opengl 4.1 includes even more then dx11 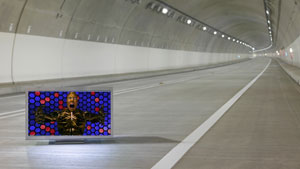 The Khronos Group has updated OpenGL to version 4.1. Version 4. API.

The potential of WebGL is the key to the future of OpenGL.

Feature parity with D3D is very important, but, let us be clear: The general choice of D3D over OpenGL was largely due to the fact that you were developing on some Microsoft platform, where the tools/support were all based around some DirectX api.

I think the choice of D3D over OpenGL was rarely based on " I can do something with D3D that I can’t do with OpenGL ", even back when OpenGL was a lesser API (in comparison).

WebGL will change everything, and if you’re smart, you’ll start learning OpenGL now, because when WebGL hits ( which, I think is inevitable ), the whole net is liable to change completely, and there will be a high demand for a new set of 3D web apps.

You need a card that is designed to support hardware acceleration for OpenGL 4.1. What version of DirectX the card supports is neither here nor there since these are just APIs to access hardware acceleration. Nvidia recently released drivers for 4.1 but it needs a card with a Fermi chip. The Quadro cardsstill only support OpenGL 3 and DirectX10 as far as I know.

i heard ogl was being split into two branches because what the cad people wanted was different than what the game people like carmak wanted. has the split occured yet and if so is it safe to assume this is the game version and not the cad version?

I also got much good things from this blend forum.I told many time about this to my friends but they refuse to accept it now they agree on it.