Opposite rotation of armor, father and daughter

Hello I am new here in this forum, and I seek your help too.

I create animations for a game of amusement parks, where I found a problem during the animation of the models.

I have two different armors responsible for moving objects in the scene, the base object is felt clockwise rotations, and the armor is ‘father’

In the second armor, performs the object moves counterclockwise and armor is a daughter, the first armor.

What happened is that the armor ‘father’ rotation performed correctly, armor and ‘daughter’ does not do the animation in the opposite direction, as I do with that, even with two armatures connected, they rotate at different sides, making with the first, somehow influence the animation of the second.

The movement that I seek to accomplish is possible to be seen in this video, the real ride.

http://www.youtube.com/watch?v=UHxpshrxEQA (As can perceive the support base revolves on one side, and banks which holds the cap to the other, and causes, with the movement of the base in the opposite direction causes the cap to make the movement appear ‘wave’)

Sorry for my english I’m Brazilian and I do not usually practice a lot the English language.
Many thanks to anyone who can help me 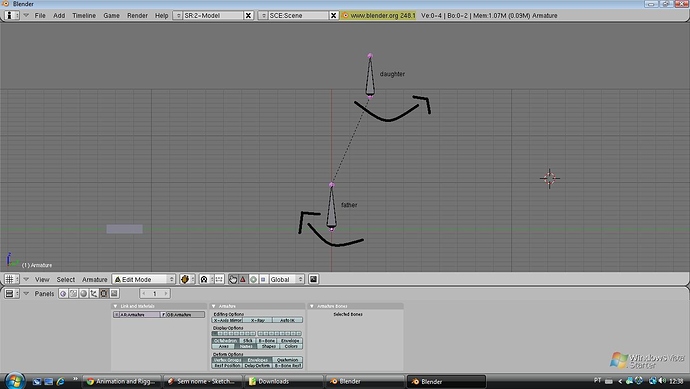 oppostie rotation.jpg1360×768 97.6 KB
Here’s a picture of what I want to accomplish, armor turning to one side, and another to another, but only the bottom armor performs turning, while the top remained static.