I’ve been messing around with vectors and stuff, so this is a quick game that I came up with and slapped a cheesy name on. Don’t bother trying to understand the code, I didn’t comment anything and it’s all over the place. If you’re interested in how the basics go I can give a brief description for you.

Controls:
You use ONLY the mouse for this game. Left mouse button and movement.

How to play:
You click and hold the left mouse button to bring up a vector. You can aim the vector and stretch or shrink it. When you let go of the left mouse button, it will spawn a ball and it will shoot out. The ball will ‘orbit’ the red circles. The goal is to get the ball to hit the green pads. Once you hit a pad you will go to the next level. If the ball hits one of the red objects, including the walls, it will be deleted.

WARNING: The console will have a lot of errors… ignore them.

WARNING: There are only 3 levels, so once you beat the 3rd one you’ll just get more errors.

I will add more levels and obstacles. I also plan on a simple level editor mode and a free-play mode. (Very simple to do with the current set up). I will add more easy levels and a better description of how to play later. Please don’t comment on the graphics. :spin:

Screenshots(old), both are of level 2:
drawing a vector 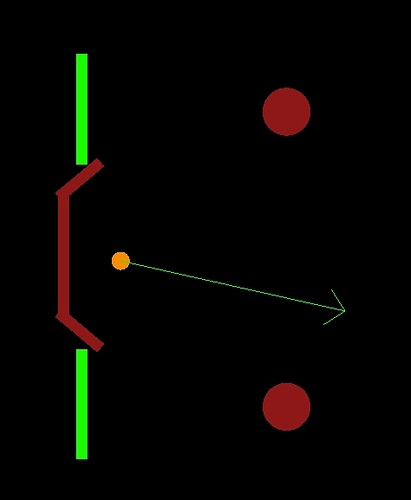 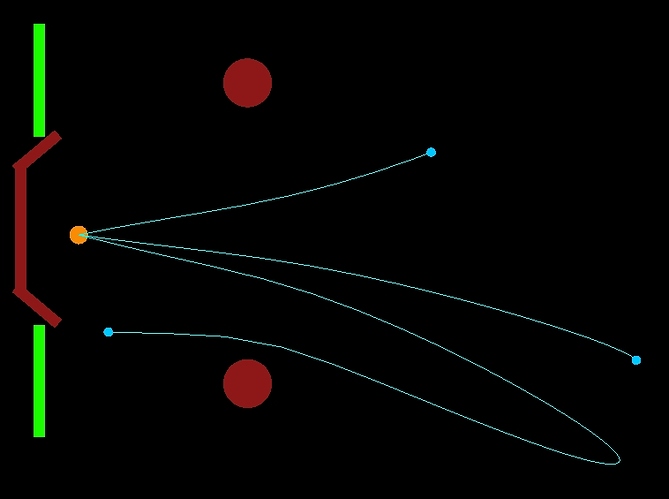 that was a fun little diversion

thats really cool. it’d be cool (though maybe hard) if the vectors bent slightly to show which way the orbiter would go

Elmeerkat - actually trivial - just do a simulation and use the curve from the simulation as the arrow curve.

I had a lot of fun playing the game. Now, all you need is some fancy pantsy artwork to go with it and you’ve got yourself an iPhone hit.

In the update:
-3 new levels
-all other levels modified
-one slightly difficult level. (to demonstrate better what harder levels can be like) 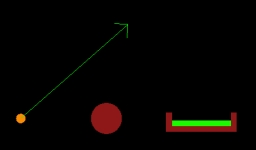 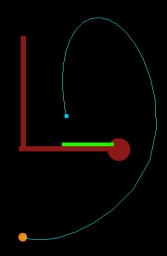 hehe :o… did you get the last one?

Awesome. I ended up getting over 130 tries on the last one. Only because I clicked as fast as I could and just watched the lines.

I had a lot of fun playing the game. Now, all you need is some fancy pantsy artwork to go with it and you’ve got yourself an iPhone hit.

I agree, that was a fun little demo! Cool idea too!

very nice game took me about 10 minutes but it was very worth wasting them.

An Idea for the art: Make it a space game were the ball is your ship, the gravity points are some black holes and the red stuff rocks and parts of other ships

Nice… real nice :D.
Level 6 is pretty easy… its just level 4 I think (with the two large orbit) that caused me some problems.

P.S. with a game as good as that you should REALY add some sounds and art… I’m serious !!!

Great game! I really like the gameplay.
Hope you make more levels. 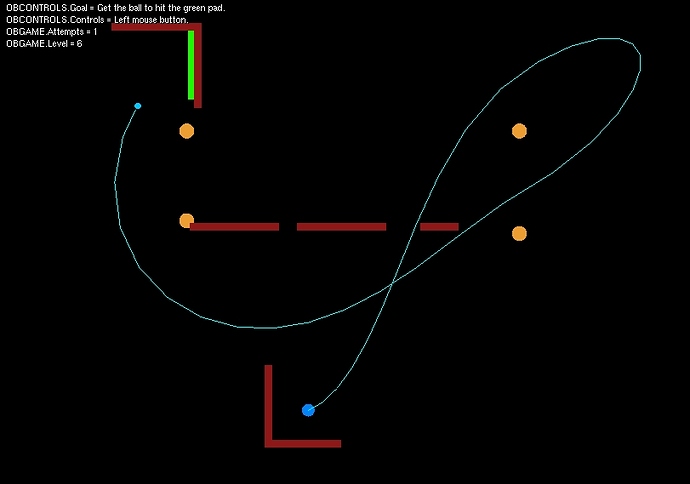 I added 2 more levels and changed many other levels.

PLAY IN THE WINDOW ON THE LEFT! It’s lined up better than the one on the right. Do not zoom it in or out.

I had to upload to pasteall because the file exceeds the forum’s limit.
http://www.pasteall.org/blend/2008

Don’t expect many updates any time soon. This game was more of an experiment than anything else. If I am to continue with this game I will most likely re-do all of the coding and graphics. If anyone is interesting in the equation I used for the ‘gravity’, I used Newton’s Law of Gravitation except I didn’t square distance and I used my own value for G.

If you have a request for a level or if you want to know how the levels are made or any other questions just ask.