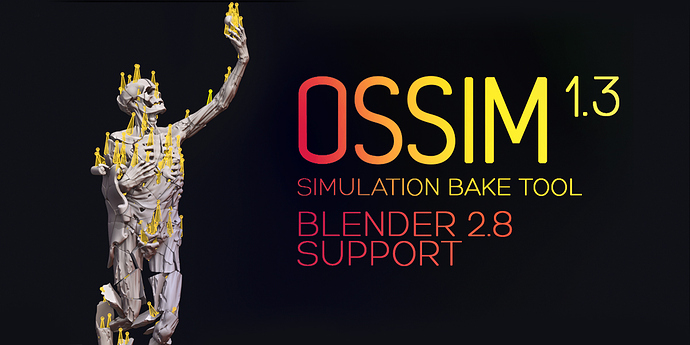 Geometry for simulations can be made in a lot of ways. There’s built in addon for Blender called CellFracture.
Or you can bring it from other 3d software.

I hope that make sense

Nice to hear that! I will definetely buy it, don’t know if this month though, because I already bought a dozen of addons and soft lately

But since I am working with UE4 almost exclusively, I think it will be very useful to me. Keep it up and have a great weekend

It’s always nice to see some features from other 3D softwares to be re-created in Blender.
Do you play on creating an addon that will with liquids?

Thanks!
I actually didn’t look at other implementations of this concept, figured it out on my own

Can you point me to other softwares that do the same? Could be interesting to look at some ideas I can use. I imagine there is something like this for 3ds max but I’m not sure.
Yes, fluids is on the list, there is plenty of features that are planned such as auto keymapping, overall nicer workflow and so on.

Hello, can I make a suggestion?
Nowadays I often manually create associations between bones and vertices on softbodies/cloth simulations to export them to Unity.
My suggestion is for you to expand your addon to work with softbodies and cloth, maybe with modifiers as well. I know that Naughty Dog developers made a script to do exactly that, export simulations to their engine by associating a bone with each vertex.


As you can see on the video, they are calling it “skinning a deformer” which is creating an armature for a modifier, in that case an ocean modifier.

If it could automate my process it would be great. I’d do it myself If I knew how to code, but maybe your addon can be my go-to solution. I’d gladly pay for it.
Nowadays this is my process:

As you can see this is very tiresome work. It would be similar to creating and associating manually each bone of the fracture example you give on your addon page.

The secondary armature is necessary to avoid cycle-dependency, because Blender is unable to differentiate singular bones on an armature on a dependency hierarchy, it only considers the entire armature, therefore if the main armature is controlling the pinning/goal of the simulated dupli-object, therefore parent of it, and therefore is also parent of the empties, if you use a copy transforms of the main armature to the empties direcly (instead of passing through a secondary armature) you create a dependency cycle.

Hi! Yes, cloth is next on my list for 1.2 update as well as export templates (ue4, unity, etc).
1.1 release is almost done, it will include bugfixes, ui/ux improvements and autokeyframing. Thanks for the video, I will take a look - seems really interesting.

If you have any suggestions for features let me know!

I have a suggestion regarding the cloth simulation that you will implement.

Since I believe your addon will add a bone for each vertex of the original cloth mesh, maybe there could be a couple settings to control how many bones the addon will generate because clothes are not the same as debris, in the sense that on a cloth every vertex is connected, while debris (explosions, breakage) every piece are separate objects, therefore every broken piece must have necessarily an individual bone for it, while clothes could have a bone not only on every vertex, but also only on every second or third vertex, and still work. It would only appear to be of less resolution the more space (vertices) there is between bones.

So these are the options that I think would be interesting:

If the option above is greater than zero, this means that on the boundaries of the cloth some vertex are gonna be lacking bones, and maybe the user wants the boundaries to have a vertex every bone to guarantee more fidelity on the edge movement. So it would be good to have a:
-option to place bones on every vertex of the outer edge (extreme boundaries) of the cloth,
-option to place bones on every vertex of open spaces boundaries in the middle of the cloth.
(If you press F on edit mode with a mesh with holes in it selected, blender will try to fill in the holes with faces, maybe this code can be used to detect boundaries of holes in the mesh, and place bones on the vertices there).

-option to place bones on every vertex of a specified vertex group, so the user can have more control over which areas of the cloth will have it’s baked movement more detailed. (This could also be used to place bones on every vertex of the edges, but would require the user to create a vertex group containing the edges, so it’s more convenient to have the option separated.)

Thank you for you suggestion! I will definitely consider this as an implementation option maybe in a form of operator options or in the general ossim tool panel.

Let me know of any sorts of bugs or feature ideas.

Hey guys. I’m about to start porting this addon to 2.8, feel free to suggest any new functionality ideas as well as any improvements!

Where can we find version 1.2? Blender market has version 1.1.

Hi,
Sorry about that, I forgot to change the banner image. It’s actually 1.2 version there.

Thank you! I actually thought what you said might have been the case so I went ahead and purchased it anyways, and was glad to see it was version 1.2. We want to use it for getting cloth sims into a mobile Unity AR project.

Do you think It’s possible to bake liquid simulation?

Only as a continuous surface I think. If you want stream like liquid sim I suggest using vertex animation.