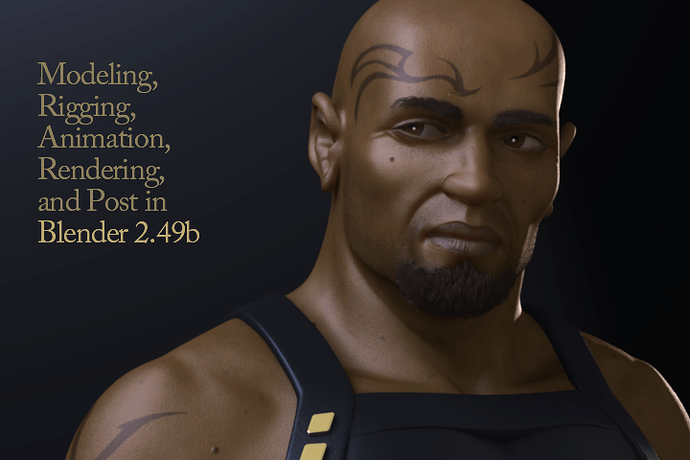 Othello: An Excerpt from the play by William Shakespeare

See it on Vimeo!

Get the face rig responsible for it all! Othello face rig V2-CTRLS.blend (1.17 MB)

The rig is version 2, with a full set of controls. It’s not been exhaustively tested (that’s what the Blender community’s for, right?

) but I’ve put it through a fair set of paces. It works in 2.50a2 as well, though I haven’t used it much in that version yet, just a quick test drive of the main controls.

Two text files in the .blend tell more than you prob’ly want to know about the rig.

The downloadable .avi uses the Xvid codec, so you’ll need that for viewing (you should have it anyway, it’s sweet & Open Source & everything). Also, I’ve found that Virtual Dub (which I used for multiplexing the audio & video) is also a great viewer app – gives much better picture quality than any other viewer I’ve ever used, besides being a major player in my production toolbox. Much better that VLC for playblast reviews during animation, and it can play back sound, unlike the Blender internal player. Also Open Source. Go get it.

The d/l vid is full size (720x480) and plays back a lot smoother than Vimeo, so it’s the best venue for seeing all that Blender can do.

the eyes lack expression–expression that is direly needed for a performance like this. In any case, what you have here is impressive, and on a much higher level then what I’ve managed to do myself.

I noticed the lack of forehead expression in the video–there would be a lot more wrinkles/furrows, because he’s sorta mad when he’s saying those lines.

then again, how dare I criticize something that good. :no:

Well done! Indeed, a step beyond my humble capacity.
It feels a bit like a “blocking” pass on the animation, more activity in the eyes and around the eyes should help, a bit stiff at times, as they don’t lead the action of the head but turn at the same time, but again, well done, nit-picking aside.
If you get a chance to watch this passage by an actor, you may have a better feeling for the next pass on the animation.
Paul

damn! I don’t have anything bad to say, seriously. This. With Blender. I ditched the animation, but now I want to try it again. You inspire me, chipmasque!

Yes, really, a little more work on your facial expression, and you’re a professional, sir.

Thanks for the vid.

Amazing rig! I’ll take a good look into it.

Some minor flaws with the animation, but other than that, GREAT WORK!

Thanks for the comments & crits, folks! Glad you like it for the most part.

I’ve tried to look at the animation dispassionately, and the eyes aren’t broadly expressive as is often seen in cartoonish characters, but (and this is easier to see in the d/l vid than on Vimeo), there are a lot of subtle shifts in both brows and lids – perhaps too subtle. I found in reviewing the full rendering that much of the finesse that was very evident in the playblast versions was muted by lighting and shading in the final – one of those effects you really can’t see well until it’s rendered. Doesn’t show in stills (the credits images are examples). Upshot is that the “eye acting,” which I intended to be understated but very perceptible, lost a lot of impact I guess.

The eyes do precede the overt head actions, exceptions being used for emotional effect, but most of the time they are locked on a particular spot, as if the lines were being delivered to an off-camera Iago. There are lots of small darts and shifts that contribute to the “acting” but they also have been muted, it seems, by the lighting. Guess in this case it’s necessary to “overact” the character to get the desired final result. I see it because I know it’s there, but if it’s lost on the audience, I need to revise it.

In terms of emotional tone, I wanted to play the character not as angry, wrathful, or enraged – indignant that Iago would suggest his wife was unfaithful, adamant about the need for “ocular proof,” and definitely threatening the consequences of Iago failing to prove his claims, but not really angry (yet). Iago is, after all, his trusted ensign, a man Othello has been in battle with, has trusted to watch his back. I think he’d be slow to anger even in this scenario.

Also, Othello is a general, a soldier of some experience, unlikely to be overtly emotional even in extreme circumstances, grief & guilt over Desdemona’s death being the exception to the rule, of course. I’m always impressed by actors who can portray deep emotional tones with little overt expression – the “steely-eyed glare” as opposed to the “Dirty Harry scowl,” or even Gollum’s often very broad facial contortions. Finding ways to accomplish that with a CGI character is quite a challenge.

I may revisit the sequence and see if I can pump up the emo perceptibly without getting into the realm of “robustious periwig-pated fellow[s who] tear a passion to tatters,” to misquote Hamlet.

The main fault I find is that the mouth corners are not moving but keep in place during all the mouth animation, giving so the effect of not a mouth but a beak.

I find this very hard to crit, but here goes:

I like the modelling, Very strong! for my taste I think that the forehead is a little too much a flat plane…

for the animation, it’s really difficult to describe,
after a few viewings i thought that the face stuff was much better than I originally saw…

…but I think that the upper body motion is too frantic, too “spliney” and could do with much more definate holds. There’s so much movement from his chest that it’s hard to focus on the subtle facial acting! the head is waving like a pendulum… Holds that allow the user to see one key thing, read it, get it, than move quick to the next would add punch…

It’s a hard thing to do though.

I’m slightly disappointed that so much of the play time is on stills and title cards… but I know how much work goes into this and think you’ve already achieved much!

I really like how the face deforms! The model has really nice deformation with a simple but clever rig!!

Thanks for posting the blend file for us to investigate!!