is the multires performance really that bad or is there something wrong with my system?

If it crashes at 800k polys, there is probably something wrong with your system or there is something more than just multires involved.

Most of people are , at least, able to reach 3 millions and some can reach one, two or three dozens of millions of polys.
That being said, it has been frequent during 2.8 and 2.9 series, to see newly introduced features, not immediately supported by multires modifier.
Ace_Dragon already said it. Other developers are involved.
So, there is a latency about when new stuff is supported in multires.
Just saving .blend file after addition of modifier should solve several of annoyances.
Most of times, users have been warned in release notes that a feature is not supported by multires modifier.

But it is always possible to discover an unknown bug.

If it crash at 800k polys, there is probably something wrong with your system or there is a something more than just multires involved.

Most of people are , at least, able to reach 3 millions and some can reach one, two or three dozens of millions of polys.

Yep - my system is getting on for 6 years old and it wasn’t absolutely top of the line when I bought it - Core i7 5930k, 32gb Ram and a single 980Ti graphics card. My biggest sculpt to date is 2.6 million triangles and aside from a couple of brushes being a little sluggish, I don’t think I have had a crash yet.

Dunno… it might be because i previously decimated the mesh with vertex group. I have the feeling that the mesh not being uniformly dense might not help. My system works usually well, I don’t see why it should have problems here. If i multires a sphere i can go much higher, but i guess that’s not a real world situation. Same mesh in zbrush obviously subdivided in an instant up to many millions polys.

I would like to stress again the fact that I don’t wanna throw empty critics to the devs, i love blender, i use it daily for my work and i think it’s awesome. There are still areas that are lacking however, that’s all… the multires i feel is still not really there for production use

If i multires a sphere i can go much higher, but i guess that’s not a real world situation.

Well. A sphere with a regular geometry is probably closer to a real world situation than a mesh with a chaotic topology.
Multires modifier is supposed to be used with a clean mesh issued of a retopology process.

Modifier is supposed to handle a topology containing some triangles or Ngons.
But a decimation can produce degenerated faces and loose geometry.
That does not mean that a crash should be expected.
Just, that this scenario may be out of usual workflow.

Yeah i guess you have a point. However seeing how it’s possible to handle the same mesh (zbrush or 3d coat) there’s definitely room for improvement

This should be already by default in Blender for any new user.

That’s why i like Zbrush, essential and new features already included, most of the time as free updates.

Is the skin modifier really that bad for this sort of thing?

You add, edit and pose spheres on the fly, and without switching tools as you stay in sculpt mode.
It’s better workflow than skin modifier.

Thanks for clarifying. Yes i know its a different workflow. It simply working more like what folks are used to from other apps is justification enough to have it as an addon. What I was asking was if you felt that blender’s skin modifier was unusable for this type of thing. Like is it too confusing to setup, or is the output a lot worse than what you get with z-spheres. Ok, so you are saying that you just don’t want to switch out of sculpt mode in order to set it up. Personally, while I’m ok with its output (blender isn’t missing basemesh creation tools), I think the skin modifier should be its own object type instead of a modifier. It’s too easy to apply it to a dense object by mistake, and its output is only useful when you subdivide it with another modifier. It feels like it should be a new object with a self contained workflow.

Looks interesting. Too bad your Skin modifier patch didn’t make it to Blender. What’s the reason for that?

Personally, I’m a fan of starting with the Remesh modifier in Voxel mode to combine and Boolean-subtract arbitrary shapes into a seamless basemesh. When done with the basemesh I usually convert it to a mesh, continue in Sculpt Mode, and finally use Quad Remesher (the add-on) to turn the result into a neat quad-poly structure.

Isn’t my patch I’ test it but the image in the thread show the results with skin modifiers in blender. The implementation in blender don’t have the complex math in the original paper 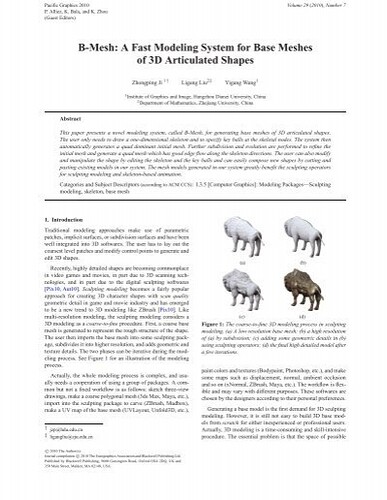 A Fast Modeling System for Base Meshes of 3D Articulated Shapes

A Fast Modeling System for Base Meshes of 3D Articulated Read more about modeling, mesh, shape, system, figure and balls.

Seriously, why is it not in master yet???

Yeah, the extra OpenVDB options in @scorpion81’s version are very nice. It’d be great if that version could be included in Blender.

Experimental option to highlight objects when switching between them. This allows sculpting with multiple objects without extra overlays that may affect the colors in the scene. #b3d #devfund https://t.co/ruUoveXTDG
14 Likes
julperado (julperado) April 8, 2021, 2:27am #7913

Hey sculptors, please check out this build by Bartek Moniewski with additional controls to change the saturation, brightness and gamma of the matcaps, and give him some feedback before he submits the patch to be included in master

This build includes additional matcap rendering features. - Saturation, Brightness and Gamma sliders for adjusting matcap look. You can type values from 0 to 5 in brightness...

I personally love being able to desaturate a matcap completely and use it with random colors for different objects, or to display textures, such a quality of life improvement!