Guys, any news about face sets and sculpt vertex color with multires? Tried the BMesh Multires branch, I am guessing this is still in the works as they are not part of this branch or are any of the devs working on them?

When it comes to Sculpt Mode vertex painting I guess the Sculpt Dev build is the one to keep an eye on, including the Experimental options in the Preferences.

Pablo worked on a flash overlay for object switching.
That is indirectly related to colors.
Currently, there is a Fade Inactive Geometry overlay to grey out all meshes except active one.
That is a problem if you want to see right colors of those meshes.
So, flash overlay happening when you switch to another object will be a substitute confirmation about active object you are painting on.

Object’s switching is a basic feature supported by 2.7x keymap, that was lost by switch to left click to select. It is waiting since a long period in experimental status, now. It should become a stable feature with a pertinent shortcut for Blender 3.0.

But except that, Pablo mainly worked on documenting todo tasks for future dyntopo and multires, and bugfixing during past month.

Thanks for the info, guys. I will have to be patient then. There are still a lot of things that have to be sorted out. Hopefully looking forward to when they get added to Multires

Did you find a way to turn that off? Seems overkill, imo…

@rpserge - how did you get that pie menu working? what is the shortcut key, please? 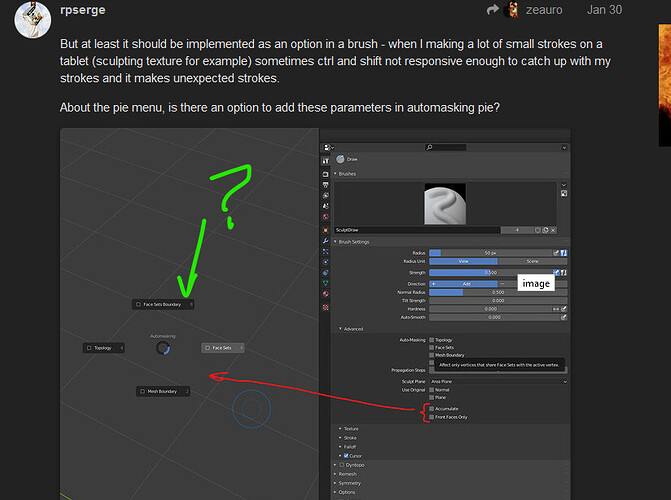 Feature has not been added to sculpt-dev branch or master. I just saw videos. I did not test the patch.
I thought there will be an option to turn it off in Overlays popover.
It is possible that Pablo did not created it, yet ; but will do that, later.

how did you get that pie menu working? what is the shortcut key, please?

Feature has not been added to sculpt-dev branch

is that a new feature? haven’t seen it before though.

It was a new feature for sure. 7-8 years ago

I guess that “feature” should be it’s own brush/tool. Does Pablo still work on new tools or did he left that field?

he seems busy, he has been doing a lot of twitch streaming for example

I think I see what you mean.
Psy-fi who developed the feature was not ready to make so drastic changes to sculpt mode that Pablo did.

Implementing this, as a stroke method, was allowing its use with all brush deformations without creating a new tool.
But it has disadvantage to force user to reconfigure brushes or create new ones, each time, user wants to apply a sequence of several distinct deformations to a spline.

Original proposal of Pablo contains the idea of brush nodes.
A brush deformation defined by nodes could correspond to a sequence of several current ones.
If Pablo makes that a reality ; just using curve stroke method for a brush with brush nodes would be equivalent or more powerful, than a dedicated curve tool able to switch brush deformation mode.

I’ve kicked the Buildbot for a Sculpt Dev branch update. Pablo merged the Master build on April 28th, so this version includes that.

As Pablo has just merged a new Master build with the Sculpt Dev branch yesterday, I reinitiated a build today. The new build is available from the Experimental Downloads page again.

It’s in the same Experimental Builds page, but it hasn’t been updated since I initiated a build on April 27th.

I believe anyone can kick the buildbot to compile a new build. You just go to https://builder.blender.org/admin/#/builders , then:

The building process takes a while (usually about 30 to 40 minutes), and sometimes there are too many errors, but if there are few or no errors, the new build will automatically appear in the Experimental Builds page.

Wow, nice. But wouldn’t it be better to leave that to devs?
Democratizing that tool will increase BF servers workload I’m afraid.
…I myself was almost starting a build “just because it’s possible”