I have been trying to paint rudolph antlers and when I go to uv editor screen to finish the painting of the antlers I don’t get the round paint tool. What did I do wrong?

I have been thinking about entering in the Blender Guru Christmas Contest. But I have been having problems with this. Most of the time I can figure it out but I have not been able to with the paint brush. And yet when I paint on the right I do get the brush as you can see. 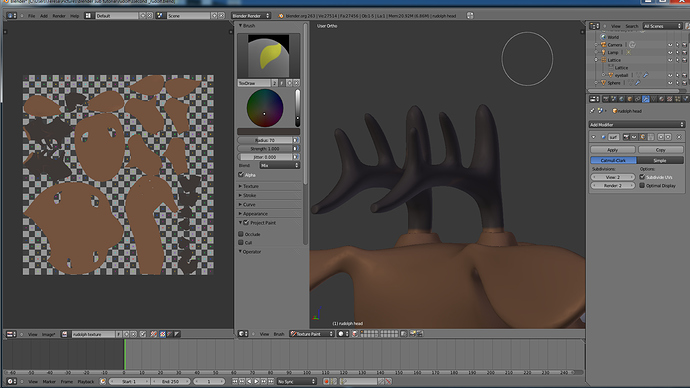 As you can see I have a long way to go with this. 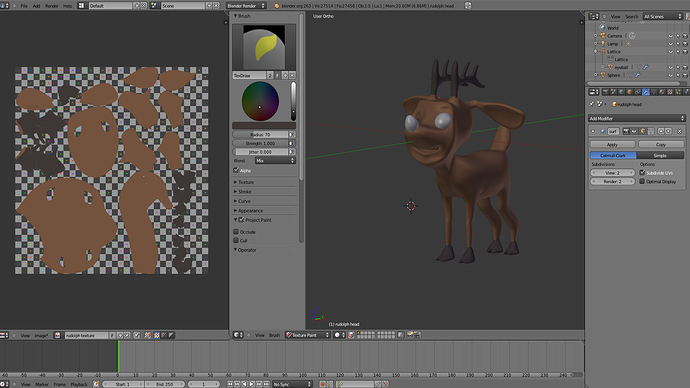 In your UV/Image Editor, see the icon to the right of the pin icon, click it, select “paint”. I hope this helps.

josef That did help me I do appreciate your help.

But when I opened the image up I got another problems that I can’t figure out.
Rudolph is a different color and when I click on him he got darker.
Please help me
Is there a color picker that I can from one image to the other 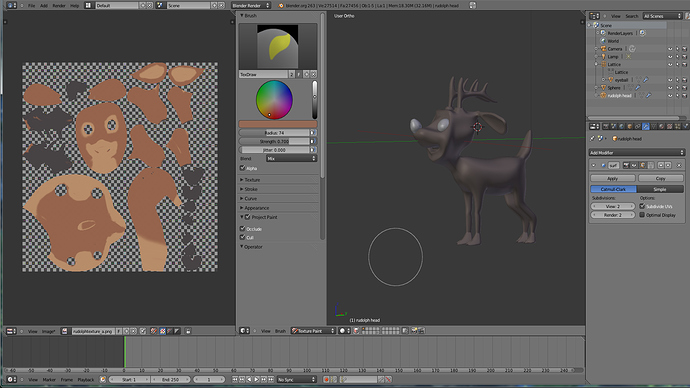 You need to have some lights in your scene to be able to see your texture painting - I usually make a group of point lights and hide them with the H key so I can not have them in my way when painting.

Color picker: You can open another little window, change it to UV/Image Editor, and load in any image you want, even if you already have another UV window open.

Also to keep in mind: if you make changes to the uv image or you paint on the model itself, make sure you save the image in the UV window before you move on to something else or it won’t save your changes.

Well I am finally almost done with rudolph the tips that I did receive did work for me. I kept having some trouble with the texture paint but at least I got it.

I will be adding some fur to him and will work on getting his nose to glow.

This is my first modeling that I have done to almost completion.

I will be doing that Blender Guru Christmas Challenge but I am not sure what to do for it. I had a couple of ideas that I am still thinking about.

If you have any suggestions I would be appreciative with your ideas.

CC would be welcome 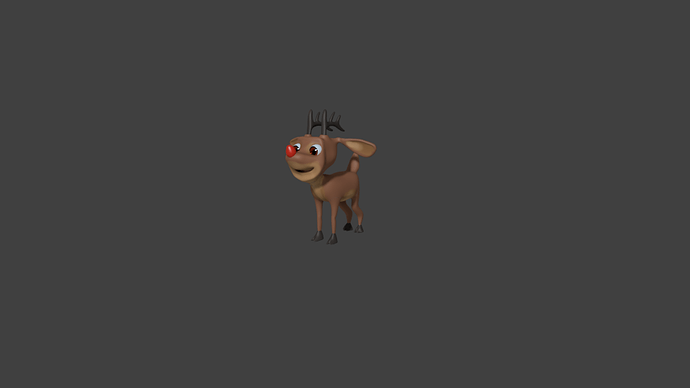 I was so tired from working with this that I had forgotten to thank safetyman and craig jones with your comments it I tried both and it did help me. Thanks guys

peter18 I will upload another image later today and have it closer Thanks.

You can use the setting in the N panel to ‘lock camera to view’ and then zoom in and pan about until you get the camerahow you want it, then turn off that lock again.

Craig thanks for telling me that. It sure helped

Please CC this. I think the eyes are too big for the head and on them is an orange small spot Not sure where that came from. How can I fix that?
Also the eyes are connected to a lattice.

Here is the close up 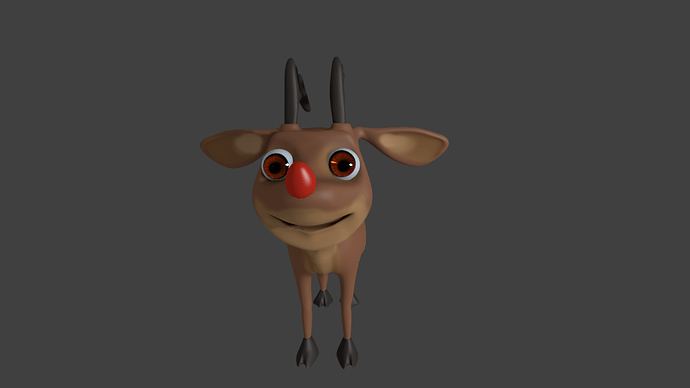 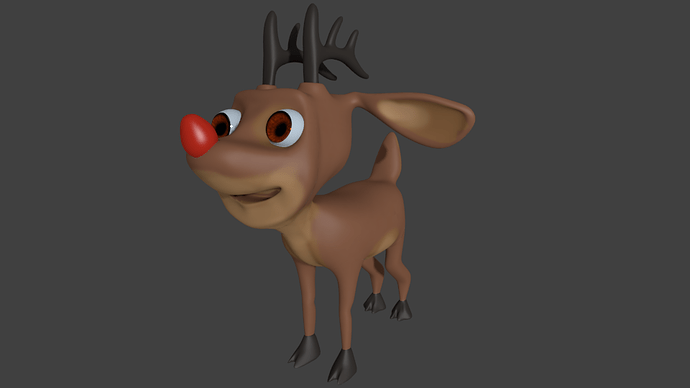 Well this is what I have done so far. Not sure where I am heading for with this. I will be adding more element.
Been experimenting with different idea. 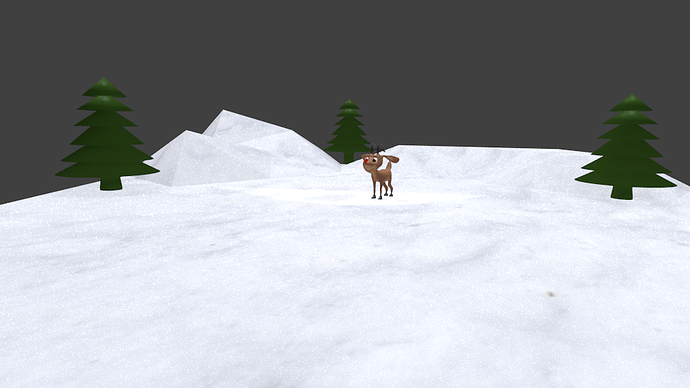 The reindeer looks somewhat lost in this big scenery. But there is no need to “hide” your model. I think you should put him in the foreground. The scenery is a little bit low poly at the moment which is a different style compared to the reindeer. Bur this can work if you focus on Rudolph and use a depth of field effect to blur the background.

Do you still plan to give him fur?

I finally added the sky to this and I did move rudolph to the foreground.

Would a sapling from addon and model a pine. Then duplicate that with another one.
Would that better match rudolph?

I also was thinking about adding a rabbit, a bear, and few toys to this scene. Which would be
pretty simple since I am a beginner. I am not sure if I should leave the image along and do
depth of field after changing those trees.

I wanted to do Santa with a bag of toys I have an image that I could use in the backgound
on a different layer but not sure if I could do. And again it would be a simple coloring

I would really appreciate some feedback on my image.
Yes I will be adding some fur to rudolph and have his nose glow more. Not sure how to do depth of field so I will need to look at some tutorials on how to do that. 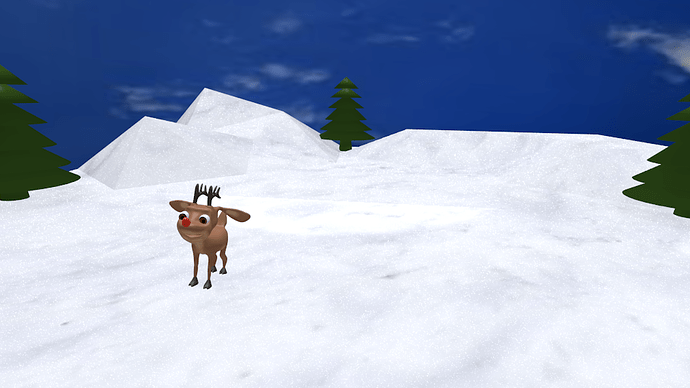 I am trying to get hair onto Rudolph and I get this. What am I doing wrong?
Please help me.
Thanks 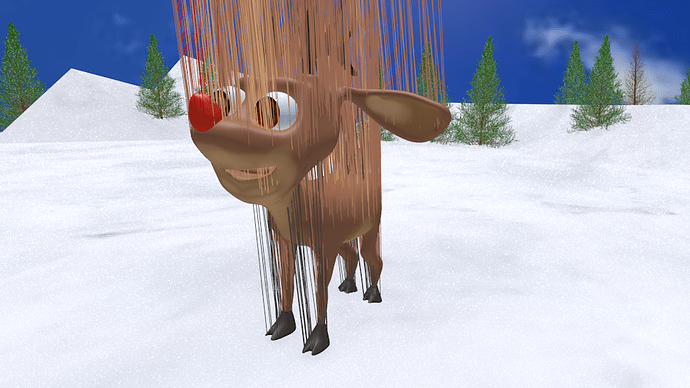 Heh, well for one you’ll need to shorten the hair length. Also I imagine you’ll want to do some hair sculpting. I’d suggest looking into watching a tutorial on hair particles as there’s too much to type into this one post.

BTW, those trees in the background are looking pretty good!

Usually after adding a particle system to an object and changed the type to hair you have particle hairs pointing away from your object in the direction of the normals. How is your scene displayed in the viewport. Do you see the same result?

You seem to use Blender Internal as render engine. Perhaps a good tutorial to get you started with the fur is this one by David Ward: http://cgcookie.com/blender/2010/04/09/creating-fur-with-the-particle-system/ He also demonstrates how to do variations in the length of the fur by using weight painting and vertex groups.

Yes I see the same result in the viewport. I will watch the tutorial on the particles. thanks for the link.

Well I learned a lot from my first attempt at modeling.

Now I have finished this. I welcome CC so that I can improve on my modeling. I have plans to do another X-mas scene.

I would really appreciate an answer on how to improve on my next project. Thank you