parent a mesh to a bezier circle

Is it random exactly where on the curve that the mesh will be parented to?
can i say exactly THAT part of the circle is where to parent it to?
I am trying to get letters converted to meshes to follow a path.
and adding a thingy with subdivide moves the point it is parented to!
i patiently parented all the meshes to the path but it wont follow the curve.
i want them to snake along.
It WILL follow a pure circle - but distort the circle and the mesh/text lets it all hang out on the corners!
thanks all 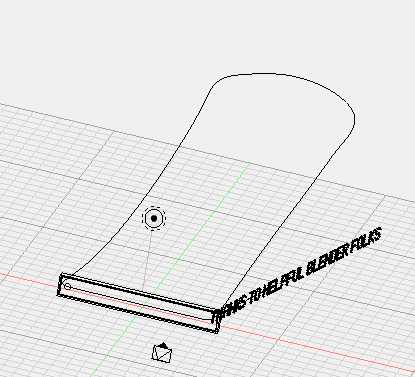 I think the solution if you want the writting to actually bend is to combine a curve modifer (or lattice) with path animation - or possibly an armiture. Its an interesting problem.

To do that you’d have to combine all the letters together into one mesh.

If however you just want to animate each letter separately to flow (ridgedly) around the curve then its a manual excercise but remember to clear origins after parenting each object and make sure each meshes centre is where you want it to touch the line, You would have to line up each letter in the starting possition on the curve and make sure curve follow is on and speed is off.

The other way would be to put them each at possition one but start each letter a frame after each other - this would , after some fiddling work but the parsing/kernelling (spacing between letters) would look strange.

"clear origins after parenting each object "
i went to the wiki manual but there is no listing for origins or clear origins.
how doo i dood it?

Each Curve has a beginning and an end. You can find them by hitting C in Edit mode with all CV’s selected; the section that gets deleted will be between the beginning and end of the curve. Hit C again to close it and the beginning will jump to one frame ahead of the end; that’s where your Parent (FollowPath dotted line) will be drawn.

Select the object that is the child of the Path Curve and hit Alt-O in Object mode to Clear Origin.

Still not getting anywhere.
i started again with a simple mesh and path
but no luck so far!