I added armateru to my character then parented it to the rig by using ctrl+P and selecting “With automatic Weights” but my character is not workin and I get this error message that I don’t understand. On all tutorial I have watched this method seems to work just fine except when I do it. My character is created using Makehuman and then I have sculpted it little bit more to make it unique. 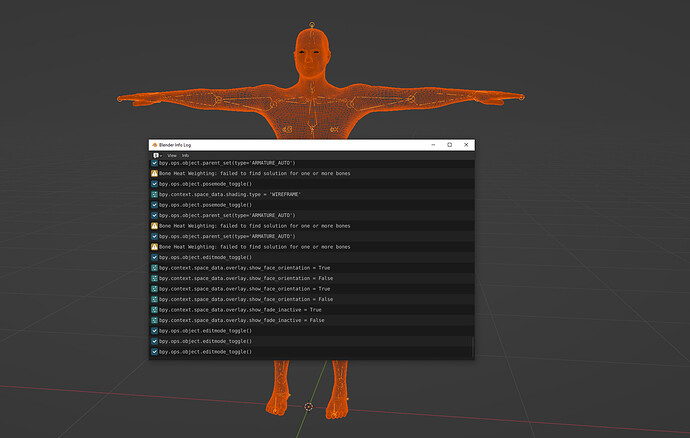 Scale up your mesh and armature 10 times bigger and try to parent with automatic weights again. Should help.

what happened was that the rig works, but it’s now 10 times bigger than the mesh it self sense after parenting the mesh went back to default size, but the rig stayed at the new size ???

Unparent mesh from armature, select armature and your mesh, press alt+s to reset scale, then parent mesh again but without automatic weights, choose object or armature. If needed add armature modifier manually and choose your armature in modifier drop down menu.

yeah not workin and the point is to make it work like it is. Blender gives option to make it as in the videos,but that isn’t workin for some reason and I want it to work and not do some hacky things.

What size is your mesh object?
And did you check for double vertices (the usual culprit for this error)? It seems unlikely in such a mesh, but still…

yes I have checked the double vertices and there hasn’t been none. I don’t think the object size matter, but it is 0.895422 which is normal size when exporting from makehuman that is rooughly about 1,75 meters

I pasted the error message since I think it says there what is the problem so there should be no quessing here. I don’t understand it my self, but I know I have solid mesh here, but still the blender fails hard.

that would be no

do you know what the error message means

It means that blender can’t find way to assign weights to some vertices because due to scale of object they are placed too close to each other. Scaling object up 10 or more times will fix this issue.

what is that number though? Is it in blender meters?

aah yes it is, that’s why I mentioned about 1,75 meters which is the make human scale

Not sure if it’s bug or expected behaivor, but this happened to me in any version of blender, even in pre-2.8. Thos it’s so easy to bypass it by scaling up, and then scaling back again. But if you don’t want good luck to find another solution.

it is a bug it seems. I just made super simple character from a cube. I copied the righ from the earlier character resize the righ just abit up and did auto weights and it workds perfectrly.

In this example the vertices are far apart, so it doesn’t have the same problem

Problem is in your mesh, some vertices are too close to eachother so blender can’t find solution to assign weights, or something. Try to merge vertices by distance increase a bit distance in operator and try parent again.