I am still trying to understand how to leverage the boid brain. I thought I would post various setups and see what others think.

Here is an ENEMY vs. ENEMY dual particle setup. There are more of the smaller purple spheres and they do more damage than the green cubes. However, the Cubes have more health even though they have less numbers. 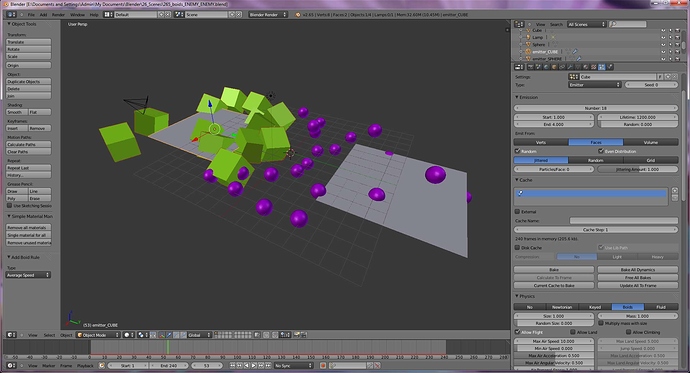 Here is ENEMY vs ENEMY with a GOAL object inserted between the two systems. Each system has fly, land and climb enabled. The green cubes descend to the top of the goal and land on it. The purple spheres start at the bottom and and climb the goal to reach the enemy, on top. 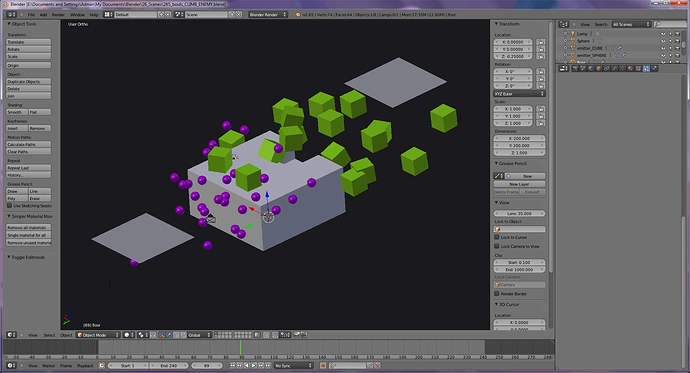 Re the first set up aggression does not seem to count for much in boid world; indeed you can try turning green aggression right up and it seems to have little effect.

When i too was trying to leverage the ‘brain’ i found that turning up the range parameter of say the purples to 2 seemed to represent what i would call aggression.

Thanks for sharing your examples looking forward to more; just a thought would it make sense to test this without the fuzzy enabled or does this setting just effect the ‘fuzziness’ of parameters set underneath? i.e. Flock, Goal e.t.c.

I’m also tinkering or did tinker with particle boids on spare time.
it’s tricky to set up and as always, I’m wishing particles could be GPUPU acc. so larger sims could be done in realtime instead of caching.

here’s a spawn and follow th leader, who’s reaching a goal and some force fields to make the path more swirly. 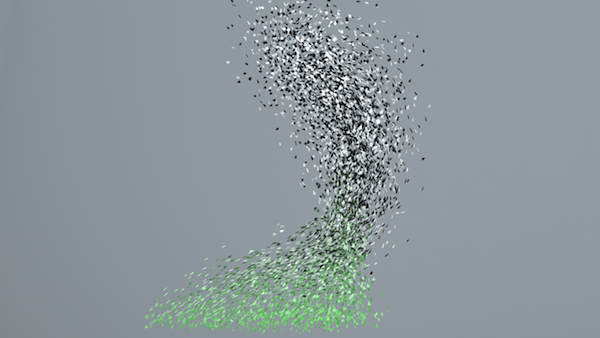 click image for a full res version, rendered at work on the crapy iMacs took a while but it got there.

I am just discovering how Aggression works in the Boid Brain. Here are my observations about the system. It seems Aggression takes into account the total sum of all enemy Strength.

STAND-OFF:
265_boids_ENEMY_stand-off.blend (132 KB)
If we set all of the Battle Settings to 1.0 and reduce our particle count to 1 for both emitters we get two ENEMY boid systems whose Fight and Flee Distance dictate what action will occur in this single rule setup. If either of the emitters are within Fight Distance, that particle will travel towards the ENEMY system. If we set the Fight Distance to 1.0 for both systems and move their emitters away from each other we get a STAND-OFF. Both boids exist but because they are each out of range, they make no other movement (assuming there are no other Rules to evaluate i.e. Fight is the only rule).

TOUGH GUY:
265_boids_ENEMY_tough-guy.blend (182 KB)
Now that we have two equal systems, let’s change values and see if Aggression actually works. We will make the purple sphere the ‘tough guy’ and increase his Aggression to 2.0. We will also increase the Fight Distance to 20.0 so the tough guy can see the near-by enemy particle systems. Sure enough, when we play the animation the purple sphere seeks out the green cube. When the sphere gets within the Fight Distance of the cube, it activates and seeks out the sphere as well.

AFRAID OF A CROWD:
265_boids_ENEMY_afraid_of_a_crowd.blend (179 KB)
So the tough guy moves towards a single enemy because his Aggression of 2.0 is greater than the enemy’s Strength of 1.0. So let’s add more green cubes. If we up the particle count to 3 we now have three green cubes that the single purple sphere wants to attack. Initially it moves towards the enemy grouping then the boid brain evaluates the Strength of the opposition. In this case, 3 times 1.0. Because the total enemy Strength of 3.0 is greater then the Aggression of the single purple sphere. The sphere is placed in Flee mode and begins to move out of range. Once out of range it is once again attracted to the crowd only to realize there are too many and flee again.

That is some great deduction Atom.

I tend to take the named parameters more literally; but your more pragmatic approach seems to be the way forward.

Great examples and maybe the mist is clearing!

Hopefully at some point i can contribute.