@Shaba1 it could be used to make a better looking fluid simulation, than with the actual fluid simulator. Also the particles work quite nicely. This means you could make a water animation that uses particles instead of the simulator, and also you can texture much differently ;D…and NO DOMAIN BOX! Gah i hate domain boxes…

Hey, bashi. Thanks for fast update, but 0.2 ver. doesn’t work for me. It gives error when i press any button. My particle mesh is selected when i do that. Do you need screenshot or text of this error?

hi mrk-z, there was a bug, i fixed it (hopefully). I it occurs again please send a image from the error, and if you know hoe to start blender from terminal, give me a copy of the last lines as well. Write as well which OS you work on. greets

It works for me now. Dunno what it was but it didn’t worked.

I’m trying to create water for static image. How do you think, bashi, is your plugin capable to do it? Because for my case fluid simulation is not working very well. And the only solution is particles with meta-meshes. Your add-on came in time.

Thanks again and I hope that you will develop it further!

I had better Results for small scale fluids, still working on big scale. Make your tests before you rely on it, as always.

Could you tell me what kind of simulation your doing?

Note: If you convert the particles to metaballs first, you can then in edit mode hide some particles to see results earlier (See video and text).

could be ported to C or C++, would be speedier?

@aemartin
i guess it could, but not by me, still learning python.
There are several things which would speed up the Process.

I’m still not shure how far i will develop this. Farsthary, which made SPH integration, wrote about future Mesh Generation on his Blog.
Anyway, atm i will work on it and it’s a great tool for small scale fluids and metaballs definitely have some great possibilities. (Still, every time i think of metaballs, first think that pops in my mind was metaballs in cinema 4d 8 or 9, which just looked awful for me. Well, my feelings about mballs is getting better

As bashi has mentioned we are working on a polygoniser in c, as a modifier,
currently it has baking/caching, motion plotting and a number of field functions to choose from.

I would like a linux build of this http://pfs.planetblender.org/?p=35#comments
the windows build didnt work for me

I am using windows 32 xp via vbox mainly for netflix. But it should work.

unfortunately my polygonizer patched build on osx doesn’t seems to work. it should be in physics panel?

besides we may want to think about to make a new thread about the polygonizer?¨

about Particle Mesher 0.2.1
IMPORTANT NOTE: The “Mesh Sequence” has a major issue, it increases Calculation times over frames. Like frame 1 = 2sec, frame 2= 3sec, frame 3 = 4.5sec and so on, leading to very long calculation times. i couldn’t find the issue so far. Good News is i can make the tool a lot faster, and besides there is still very bad written code which i think has some chance of speed improvements.

Is it possible that you could make a version with LWO export? I’m using lightwave 3d, and the fluid renderer is to say the least, horrible. This method as well as blender’s fluid mesh solver are much better. If you only have plans for OBJ export, that’s fine as well.

wow! this is a cool script! I have to try it out! thankyou!

Hey, this worked great for me: 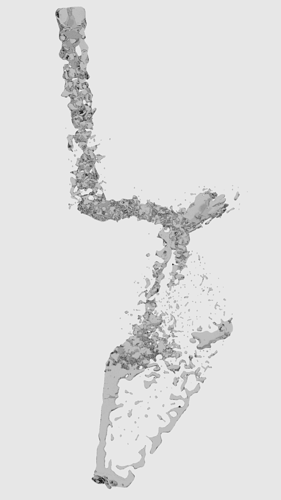 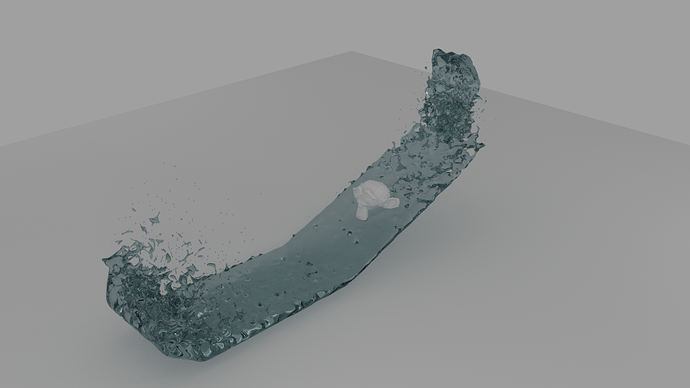 I will test it out some more, but for simple things it looks pretty good. Also it seems way faster than actual fluid, but that may be wrong because it only works with one frame for now.

woah, somebody digged this out

While the Script is *working, more as a proof of concept (actually for me learning python), i don’t think i develop it further, out of several Reasons:

As stated earlier from my point of view a particle-based Fluid Solver makes way more sense than the actual Domain-based. It’s more Flexible, you see Results “instantly”, Particles are more flexible, GPU Particles might come (http://andrewfsu.blogspot.com/ might integrate it in bullet->Blender, i’ve asked him)… and so on. Now, while my python script does what it should (exerpt animation) it would be WAY (4-10x? don’t know) faster in c/c++, which it really should be for Meshing/Skinning large Particle Amounts.

i can see three “solutions” at the moment:

i’d like to hear/read your opinion on this. thanks