I’m working on a jet engine, which employs a particle system for the thrust. It uses a particle deflector to guide the particle stream.

I’m heaving a couple of problems. Take a look at these images: 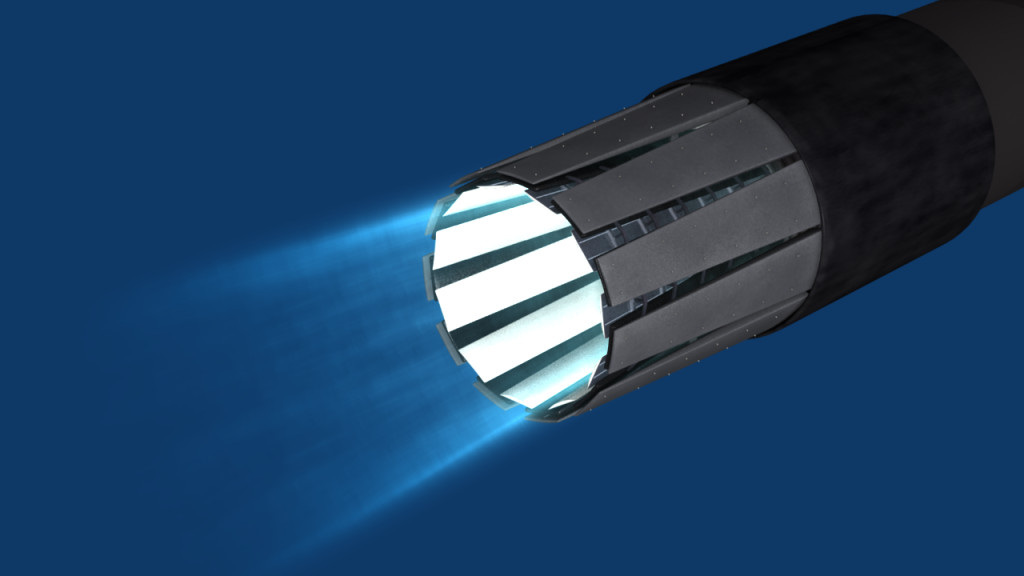 As you can see, the glow of the particles is visible through the nozzle blades, most so in the second image, because of the camera angle, I guess. Can anything be done against that? Decreasing halo size or making the deflector smaller doesn’t work well, because it will then become visible that the exhaust is smaller than the nozzle.

Also, the individual vectors of the particle animation are visible. I’m heaving a tough time making it look smooth.

And finally, is there a way to increase the speed of particle emission beyond the 2.0 value? When I animate the startup of the engine, it looks kind of weird that the exhaust moves out of the nozzle relatively slowly, as can be seen in this movie (file is h264/mpeg4-avc video).

This thread may shed some light…

That thread never gave a solution to the particles disappearing problem Modron had. What he had by accident, I want to recreate.

I have been able to make the exhaust look smoother by using a textured halo BTW, using a blend texture which maps to alpha.

Halfgaar, you may want to see if using Jahka’s particle patch gives any better results - his development page is here, and it’s available at graphicall. There are a number of threads discussing it here (search for Jahka), if you need help. It offers lots more control. One thing - it IS a work in progress and does have bugs and so on - make sure you work on a copy of your real thing to avoid corrupting and losing your model!

Hmm, I don’t like using non official versions, because of incompatibility problems and such. However, there are things that I think could be better about the particle system. The ability to set a number of particles emitted per frame is one thing, to be able to make everlasting animations, without running into the maximum particle count (100000). And, the ability to have material IPO’s which don’t map to each particle’s lifetime. I don’t know if this is handled by the rewrite, but it would be good ideas, in my opinion