Particles and dupliverts fade out

I’ve been working on a torpedo/missile like object to be used later as part of a spaceship I created. However I’m having some troubles creating the fire that comes from the engines.
I used a particle system to create the exhaust flow. However the standard particles with halo material did not gave the effect I wanted. I then added a small icosphere (very low vertices) as a child and enabled dupliverts on the source. This seemed to work.
However the downside is that I can’t let the fire fade out/chance color in respect to the distance to the missile. I can change the material in the child object but this would change/fade the entire stream. which is good for some things, but not what I want here.
Does anybody know how I can do this?
I tried adding a second source (well multiple, 1 for every exhaust) and let it create the smoke but that didn’t worked at all and the abrupt stop of the fire-steam is the biggest problem.

Attached is a small render. 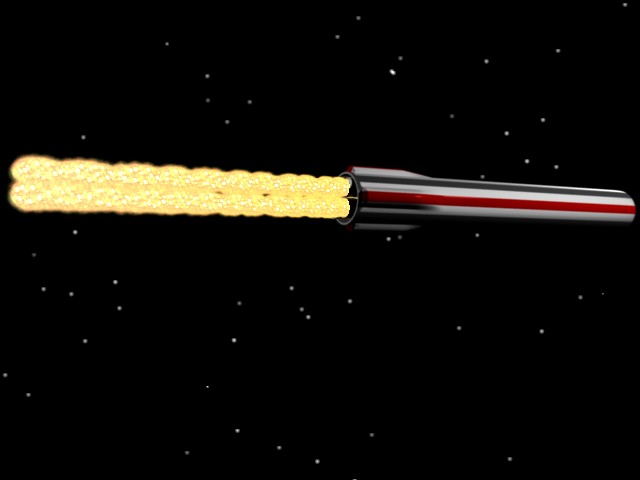 Hmmm, maybe you could try lowering the life of the particles…

I more or less solved it. I used two emitters. One with the original fire and a second one which will work as the fade out. Placing them on some distance from each other and working with the particle amount and lifetime seems to solve it.
However this will only work if you don’t rotate the missile. If you do the scene gets messed up because particles appear from the side. Maybe solvable with deflection. Not sure yet.